Sapphire currently offers two RX 460 models. There’s NITRO featuring 4GB of GDDR5 memory, and 2GB model with slightly different cooler. For our review we decided to buy the NITRO, just to see how good is the new Dual-X cooler and to avoid running into 2GB VRAM limit.

First impression was rather positive. It arrived in a surprisingly small box, but all Sapphire RX 400 cards, no matter if high-end or entry-level, get similar packaging. The card is average in size (14x22cm), but it’s really light compared to most cards I own (495g). The top shroud is not a fingerprint magnet, but it attracts the dust. Some elements on the sides are finished with glossy paint, so you need to avoid touching those unless you want to leave some marks. Before I leave you with some pictures, bear in mind that they were taken before I discovered that there’s actually a protection foil on the fan stickers. 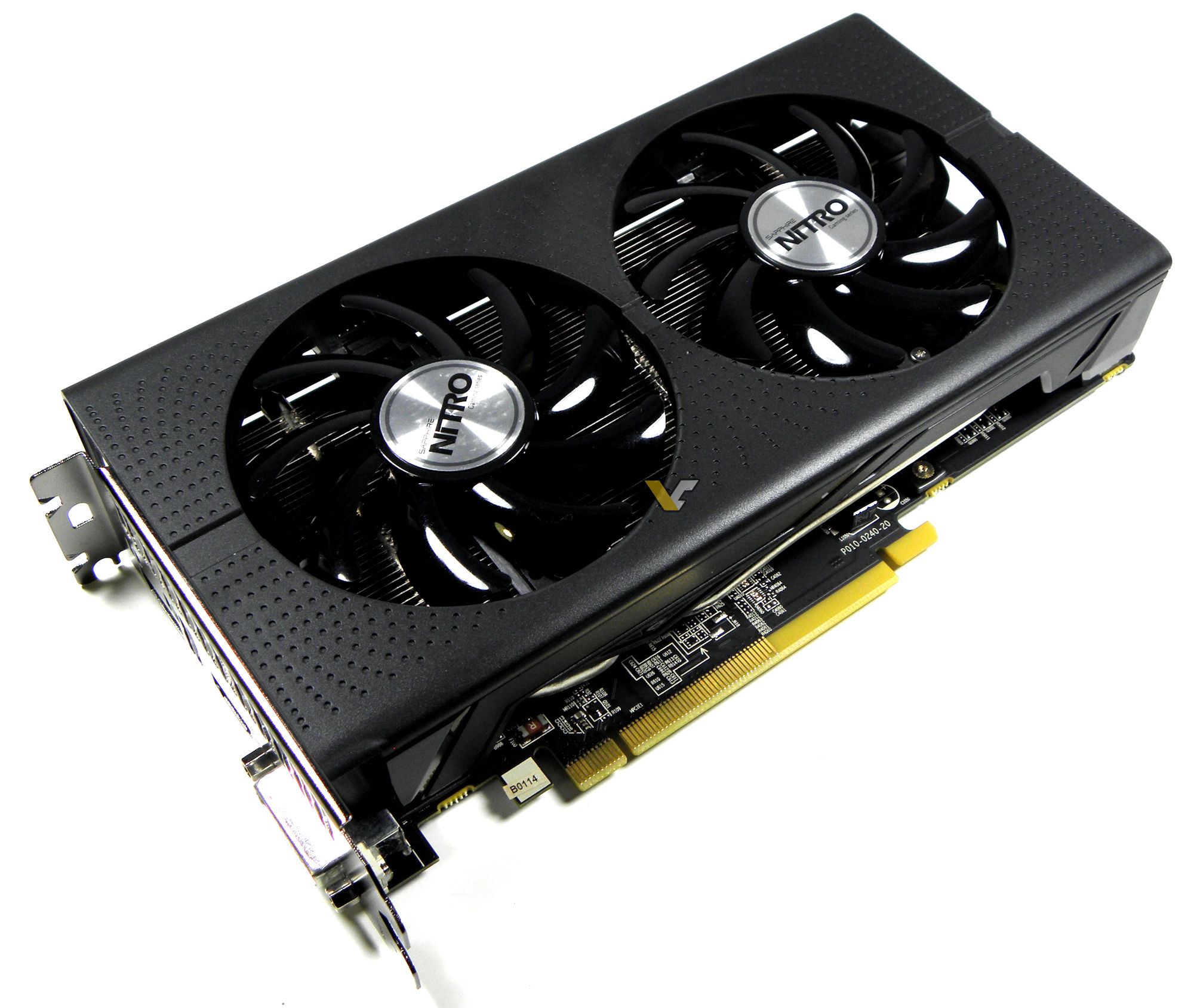 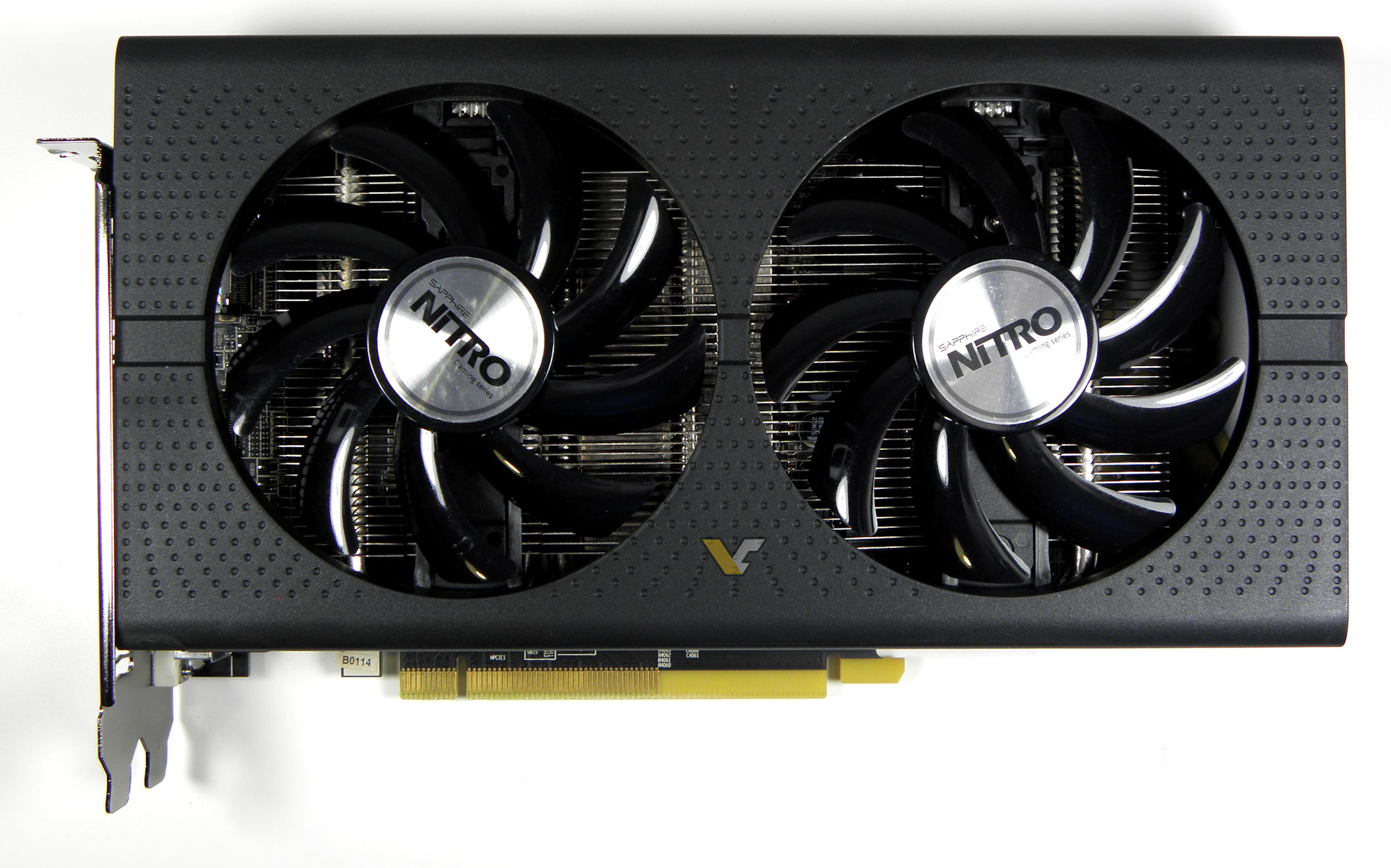 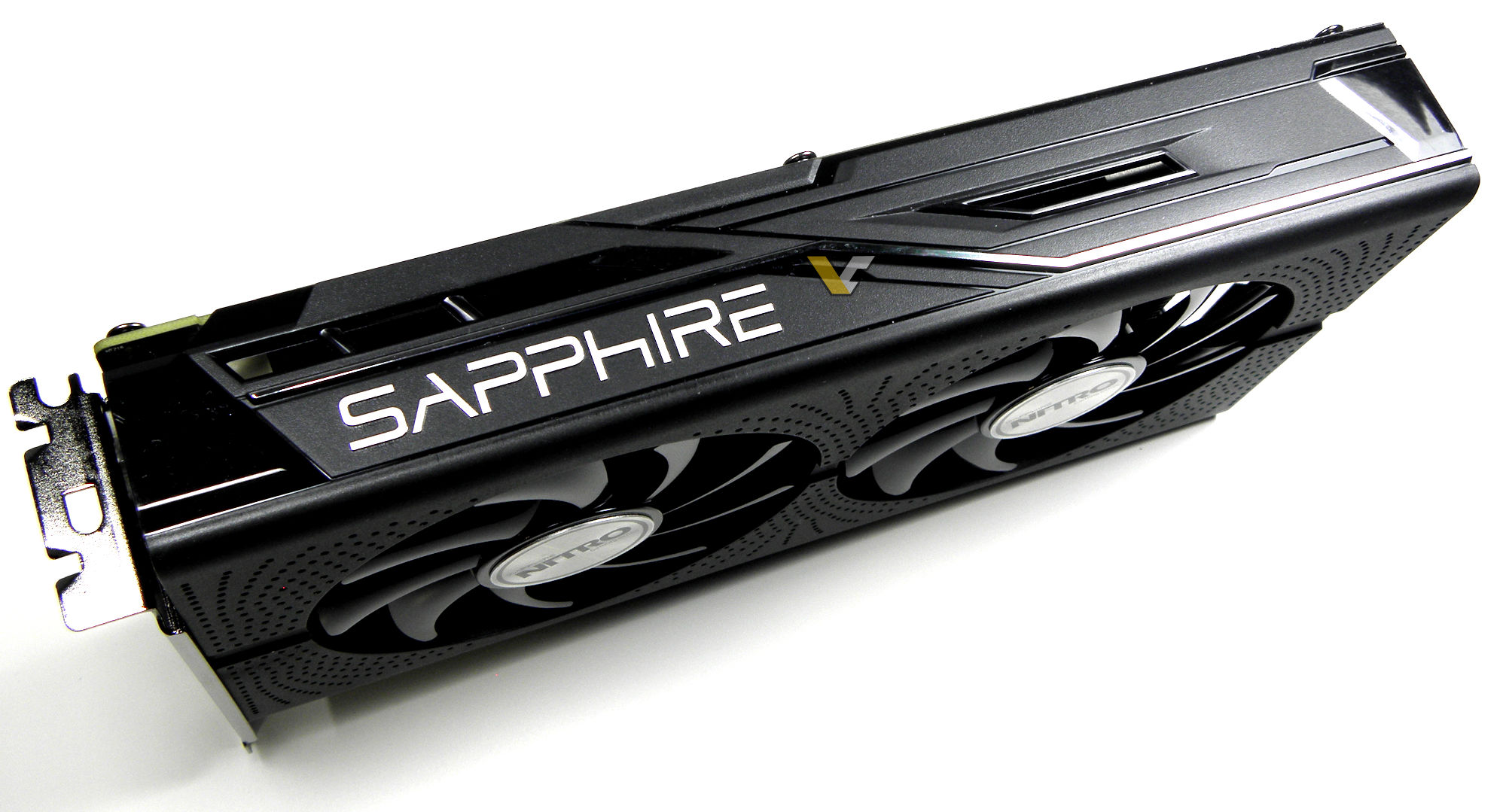 NITRO logo is illuminated by green diodes hidden under few layers of the PCB. NITRO RX 460 has three display connectors: DVI-D, DisplayPort 1.2 and HDMI 2.0. I had no issues using all these ports. 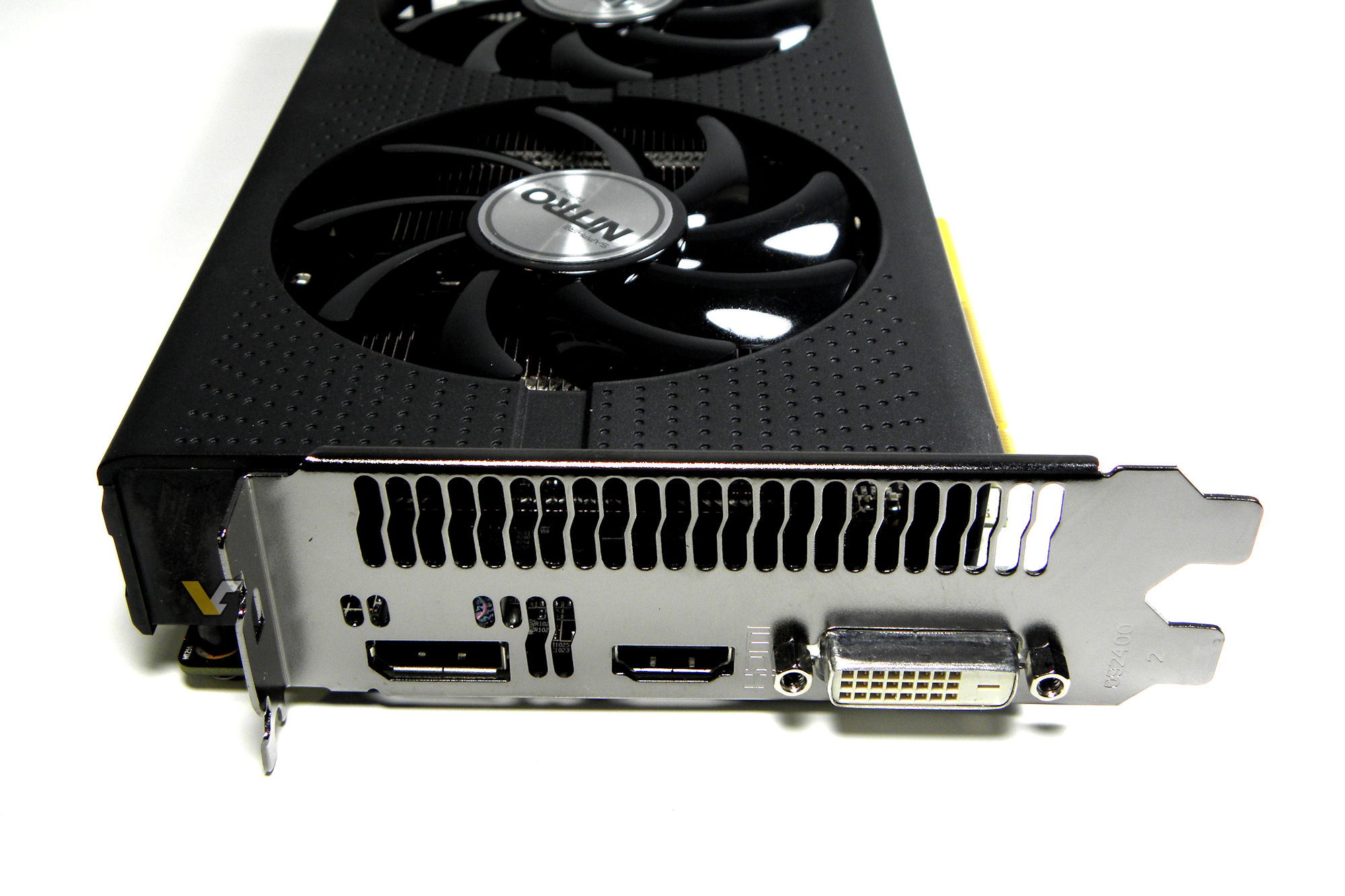 The cooler has two heat pipes and massive, at least comparing to GPU, fin array. Heat dissipating base covers GPU and memory. There’s also a small heat spreader over the VRM. 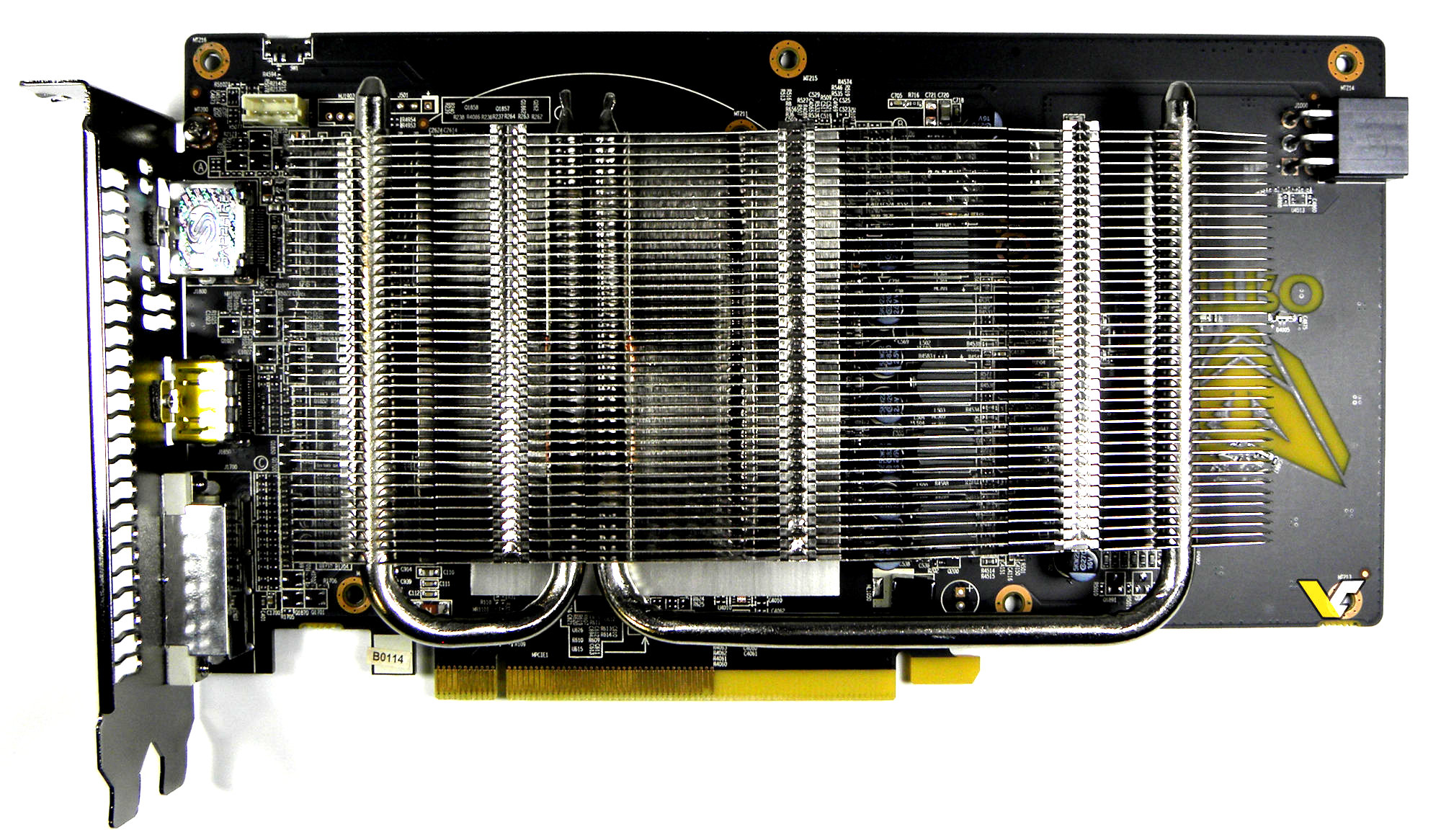 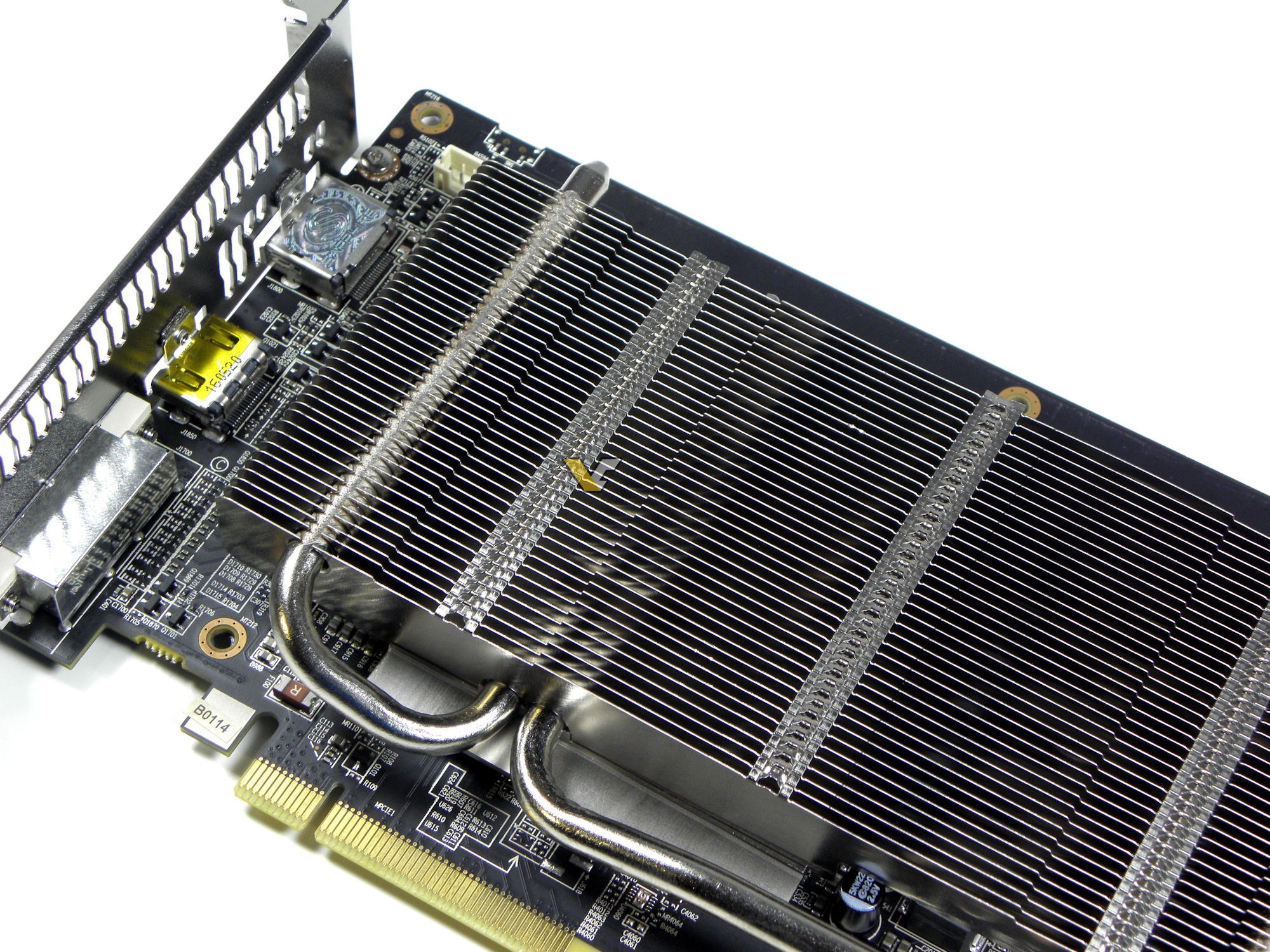 This was the first time I saw Baffin GPU with my own eyes. Despite knowing the exact dimensions of the die, I was still surprised how small this processor really is compared to others. You could actually compare it to the memory module. 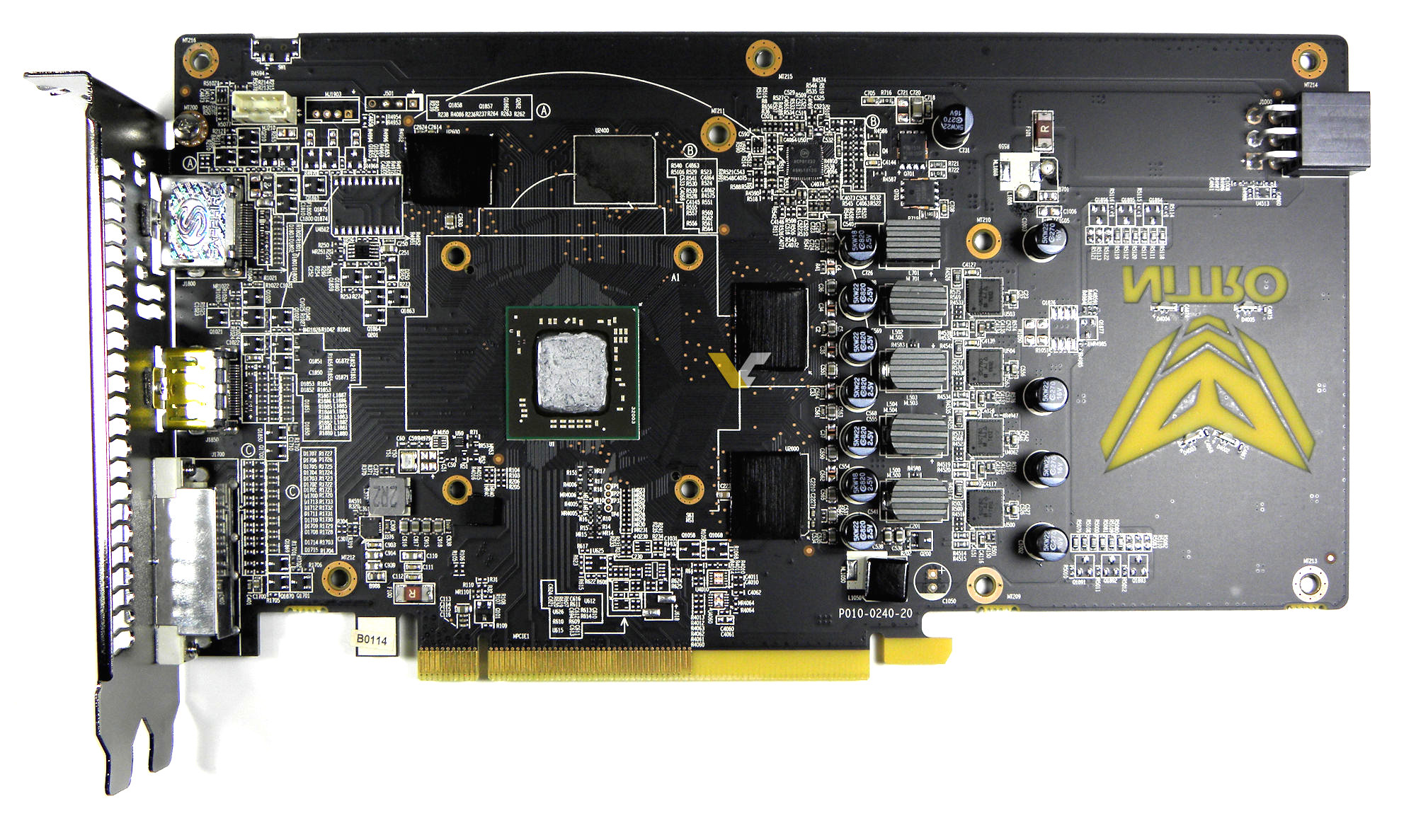 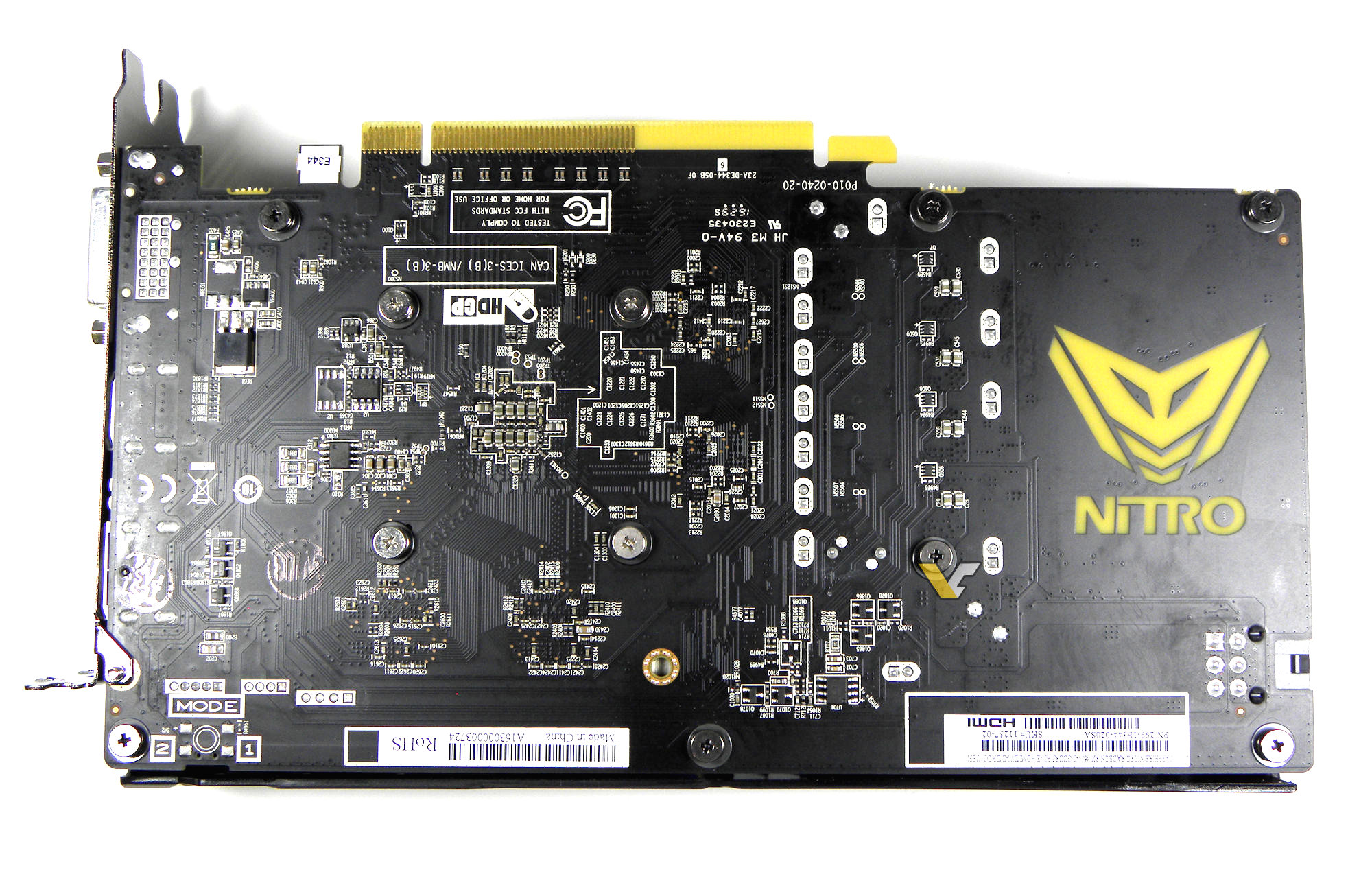 The card is equipped with 5 phase VRM. Those are Black Diamond Chokes 4, and according to Sapphire, they will reduce temperature by 15% over Mark 3. During my tests no coil whine was heard. 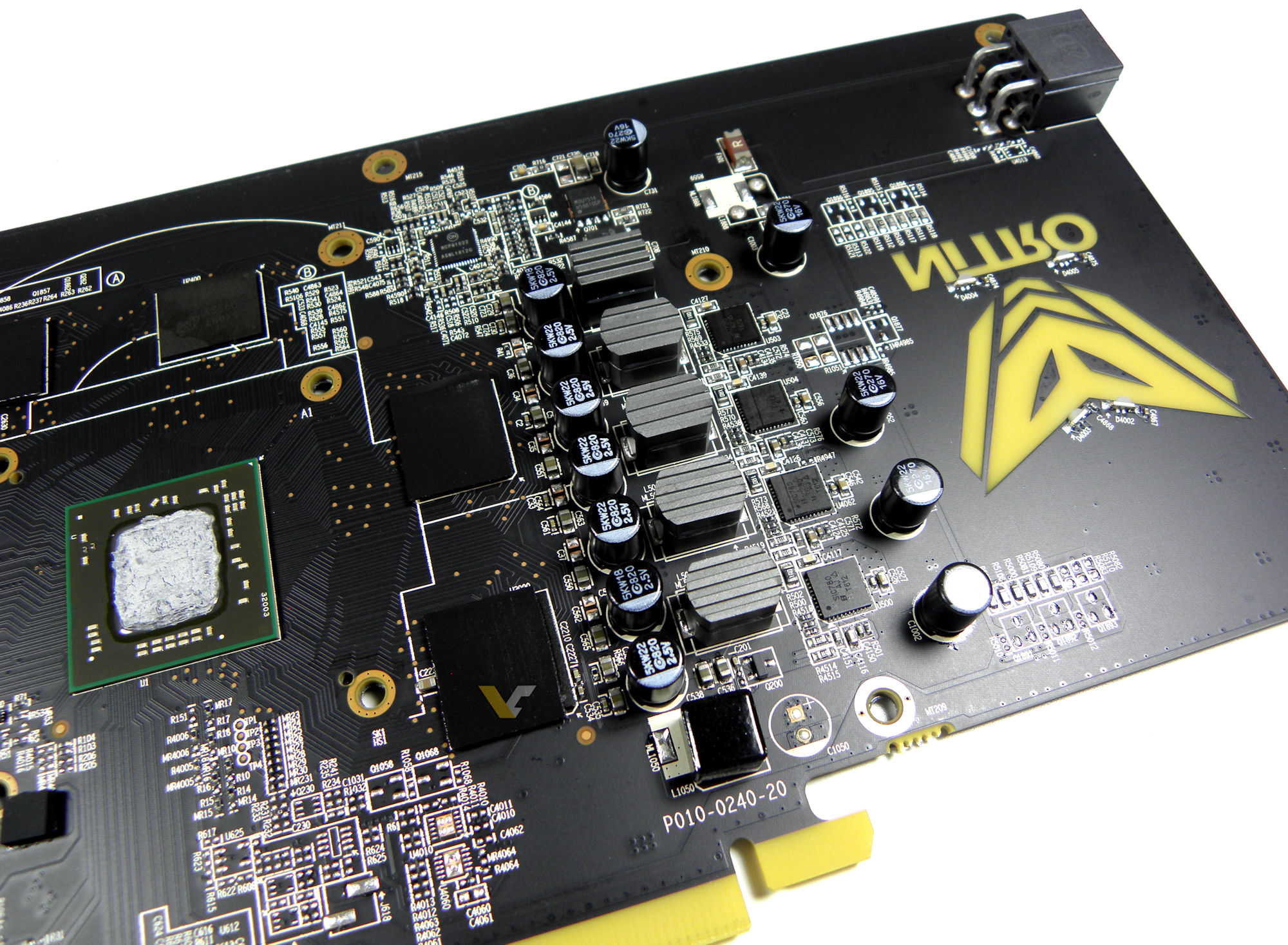 The label on the memory was almost impossible to read, but it looks like Micron D9SSY. 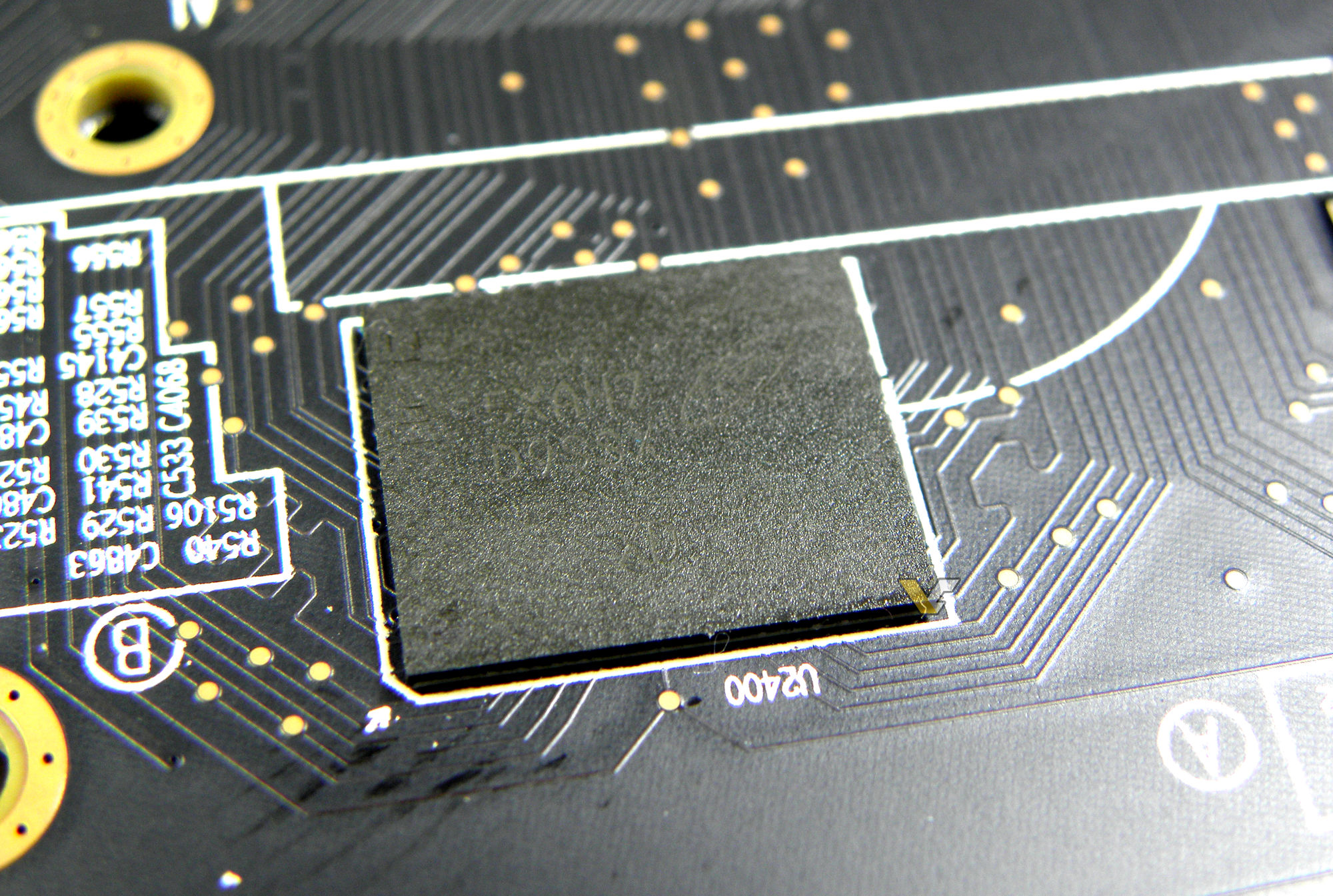 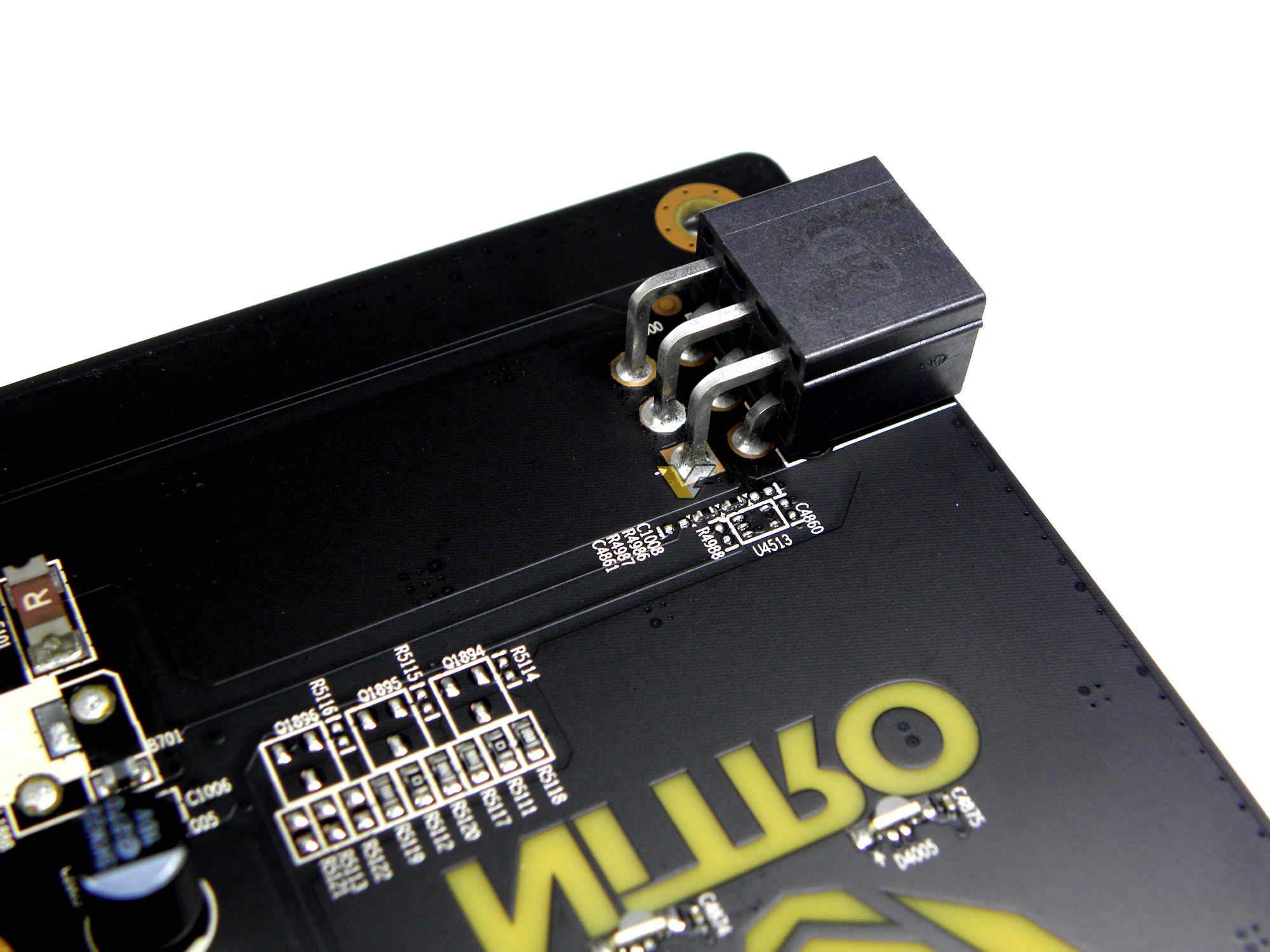 Here you can see the GPU up close and copper base on the cooler. 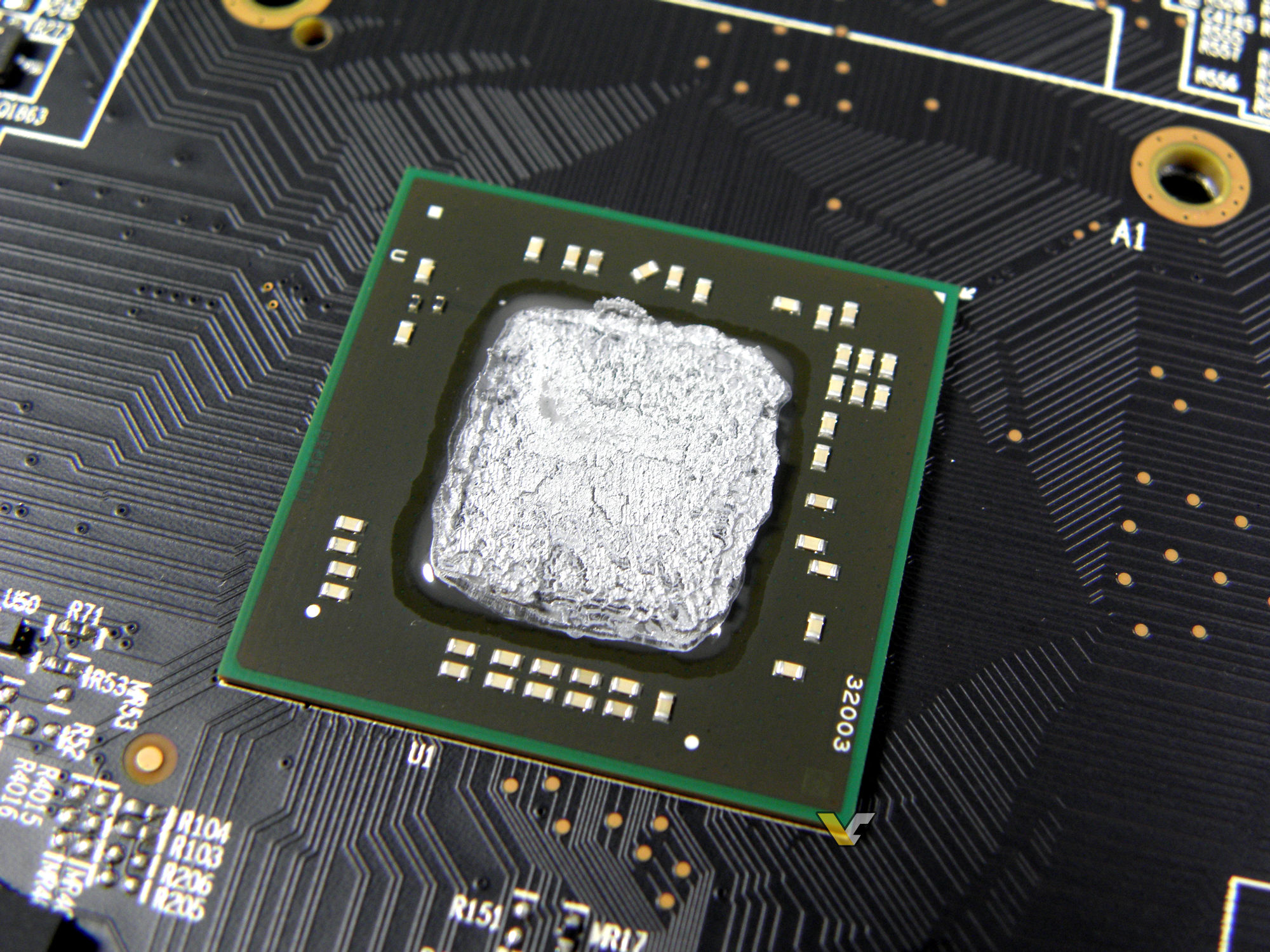 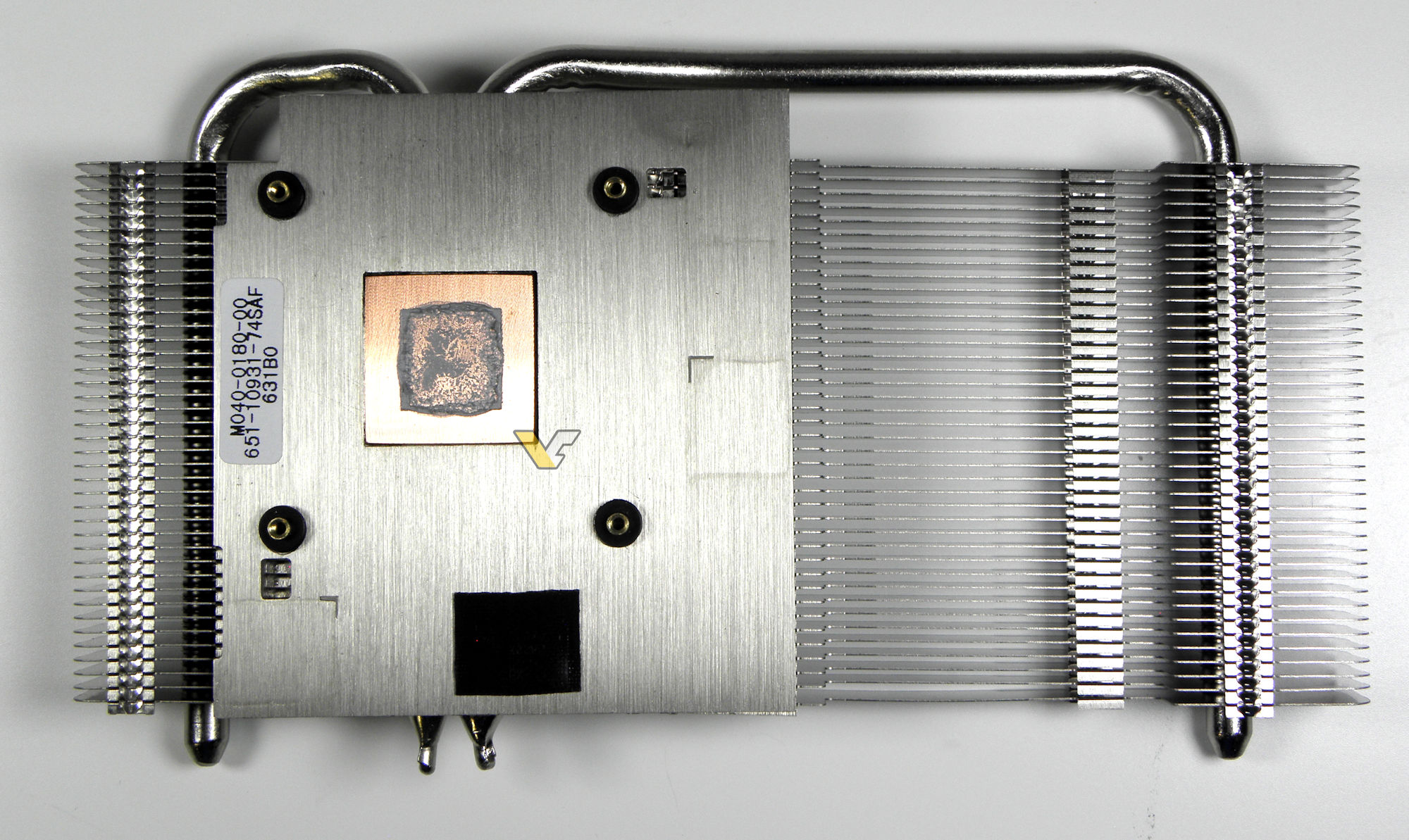 One of the biggest invention of the new Dual-X cooler are removable fans. Two screws need to be removed in order replace the fan. It’s actually very easy, and hopefully this is the last time I had to do it. 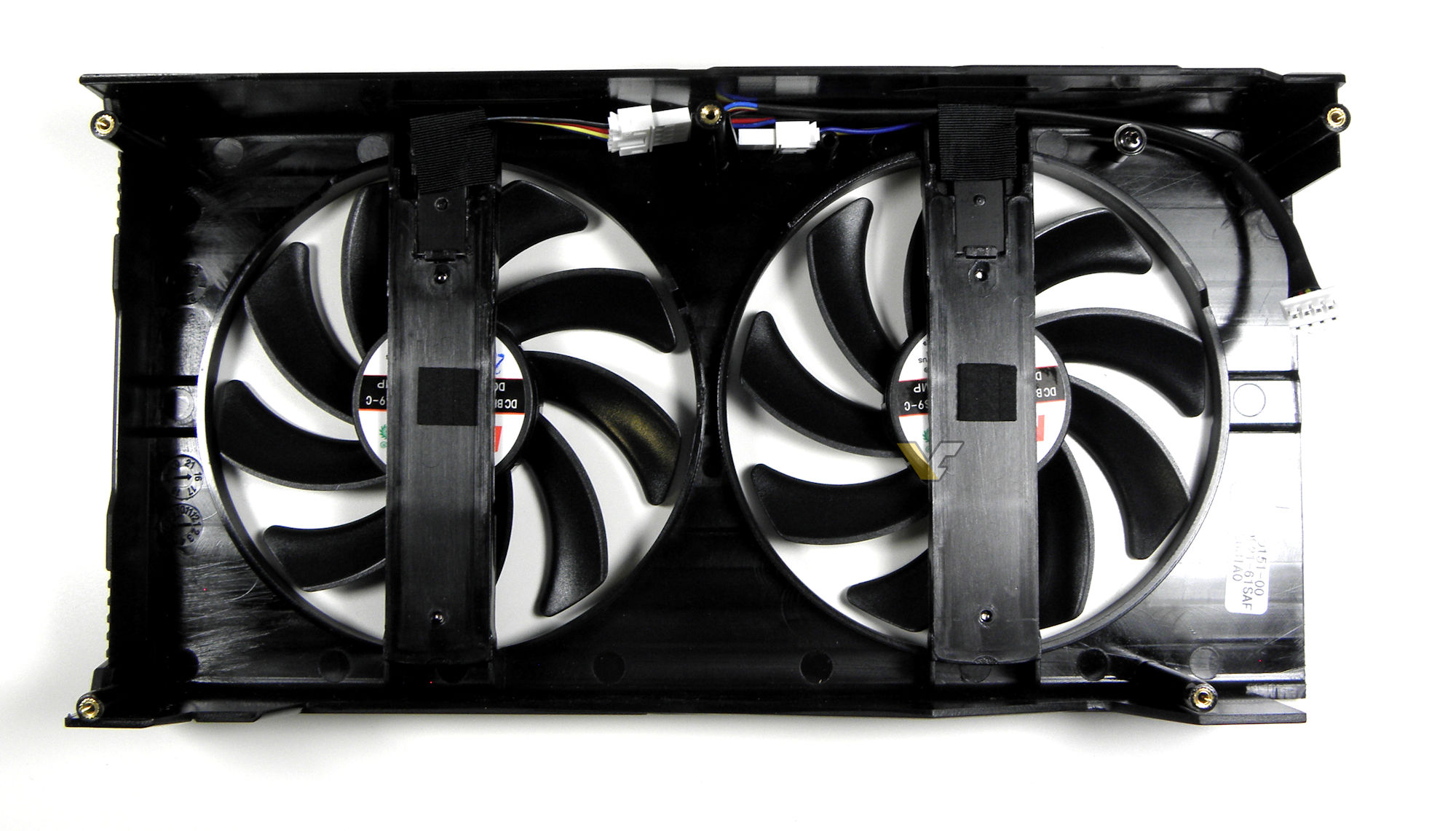 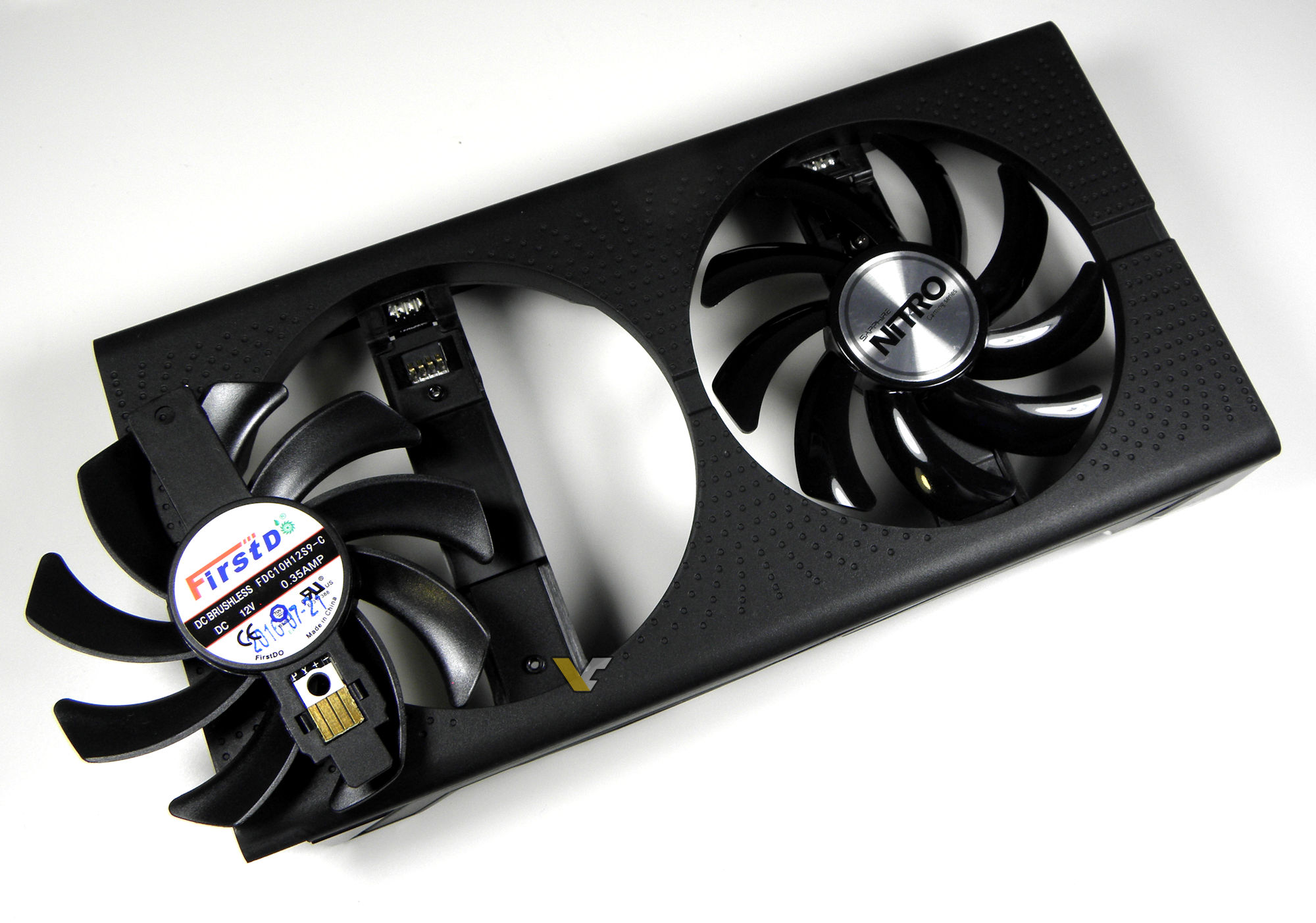 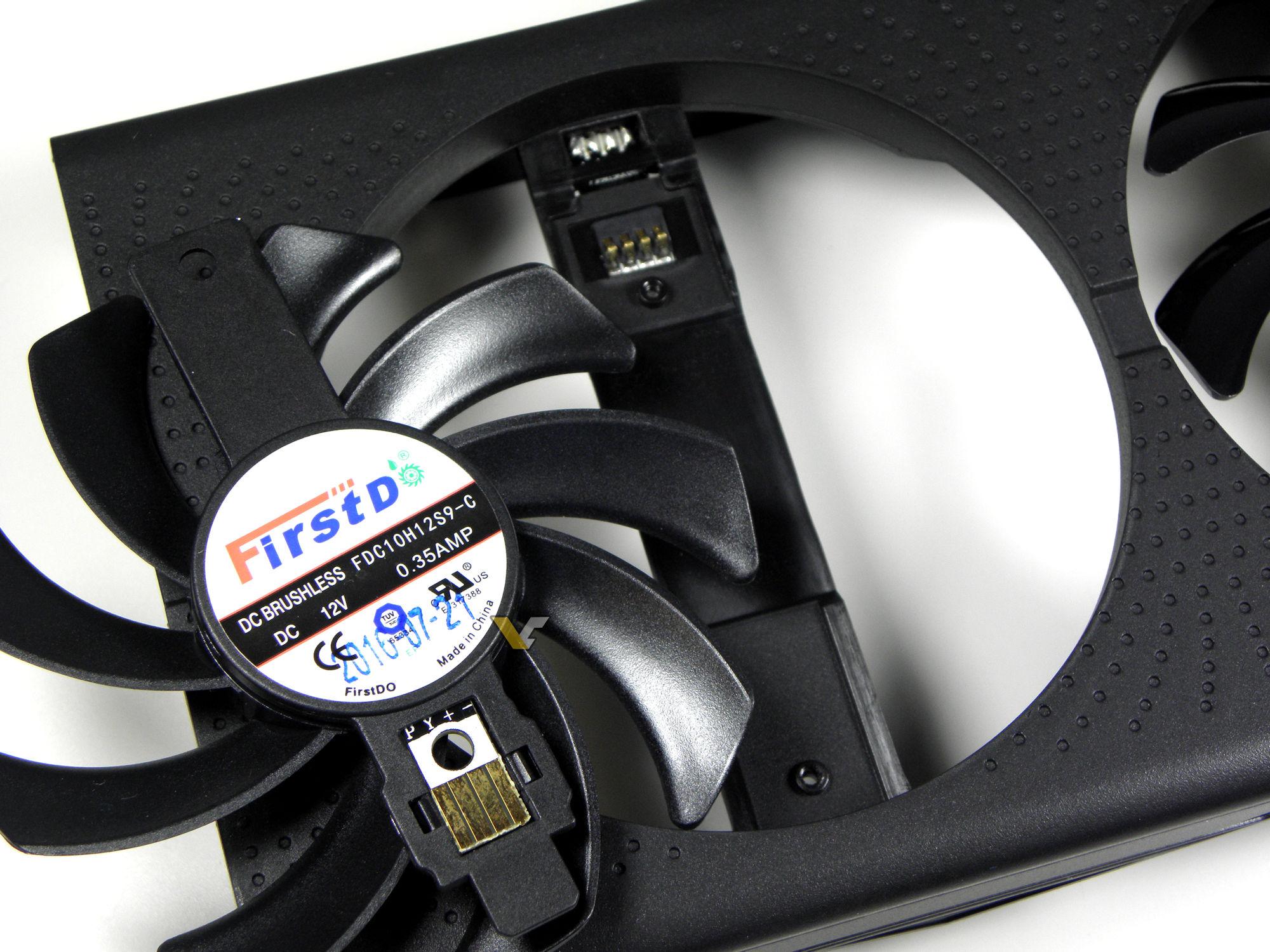 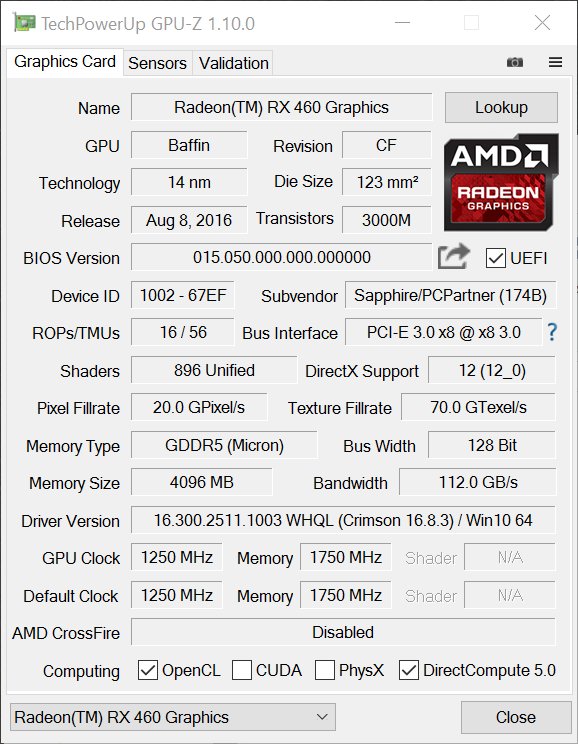 Sapphire RX 460 NITRO has good overclocking potential thanks to external power coming through 6-pin connector. We successfully overclocked this card to 1370 MHz (115% of reference boost clock). Judging from other reviews I read, this result is quite impressive. However, there’s a really good reason why you shouldn’t overclock this card to such level: power consumption. While we did not measure directly how much power is consumed by card, as we lack accurate equipment, we were looking at GPU-Z reported power consumption, and that increased significantly once we passed 1370 MHz (160% of stock power consumption).

Here are my notes from overclocking in case you wanted to see the details:

I recommend sticking to 1350 MHz, as anything further requires a higher voltage and as a result produces too much heat and power consumption.

For memory we chose 1850 MHz. It’s much lower than 2000 MHz that can be applied, but for some reason it didn’t pair well with the high GPU clock and it caused artifacts.

Of course, for our overclocking we chose Sapphrie TRIXX, here’s how it looks after we were done: 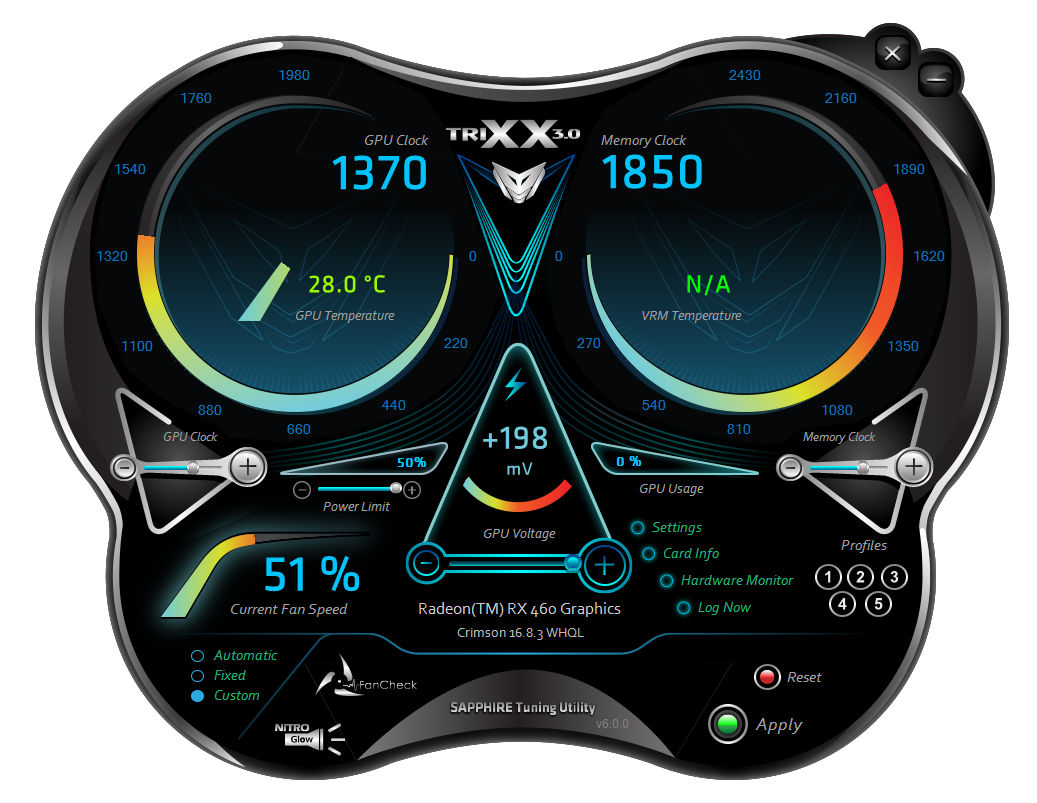 And screen-grab from GPUZ: 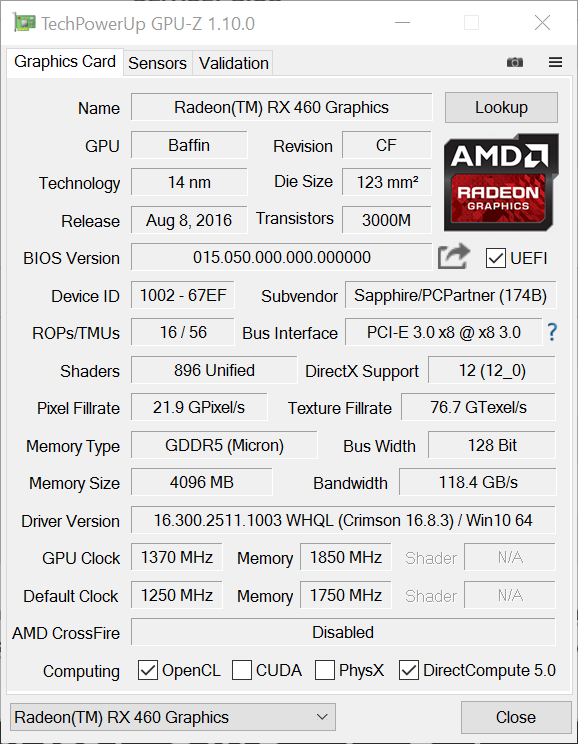 Like always, we apply custom fan profile. We want to keep the temperature under 80C to avoid throttling. 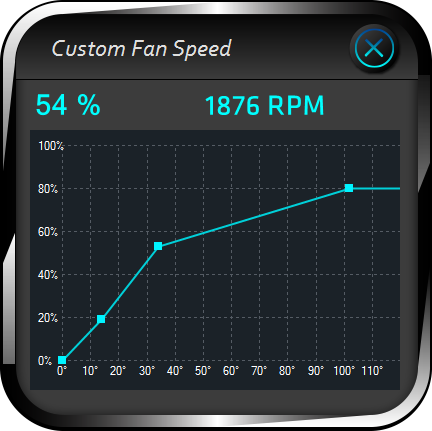 To keep RX 460 NITRO under 80C you don’t need to apply custom fan profiles unless you are planning to overclock. For overclocking, custom fan profile is necessary to keep the temperature under 80C. Only in Furmark it reaches 85C, but this is actually quite normal increase for power virus.

Thanks to 0dB technology, card is noiseless when idle. I had to start two HD youtube videos to see the fan spinning. Temperature at idle is 39C, but it will increase to 44-46C if you are doing something else than looking at empty desktop. 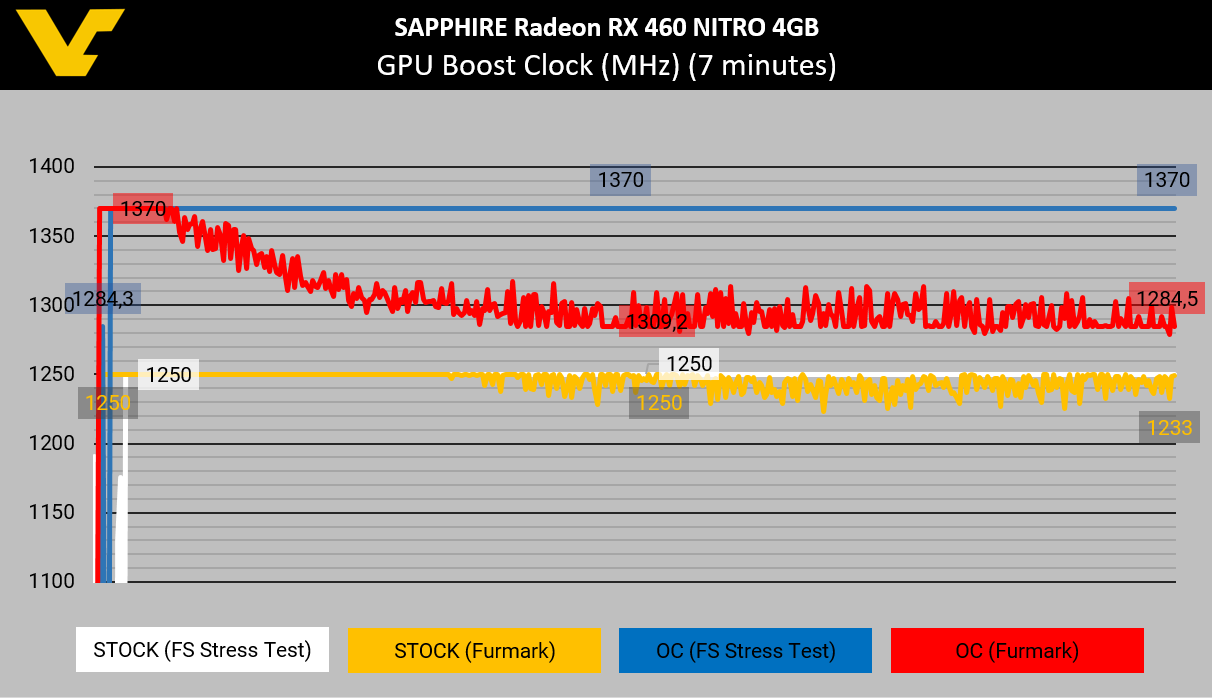 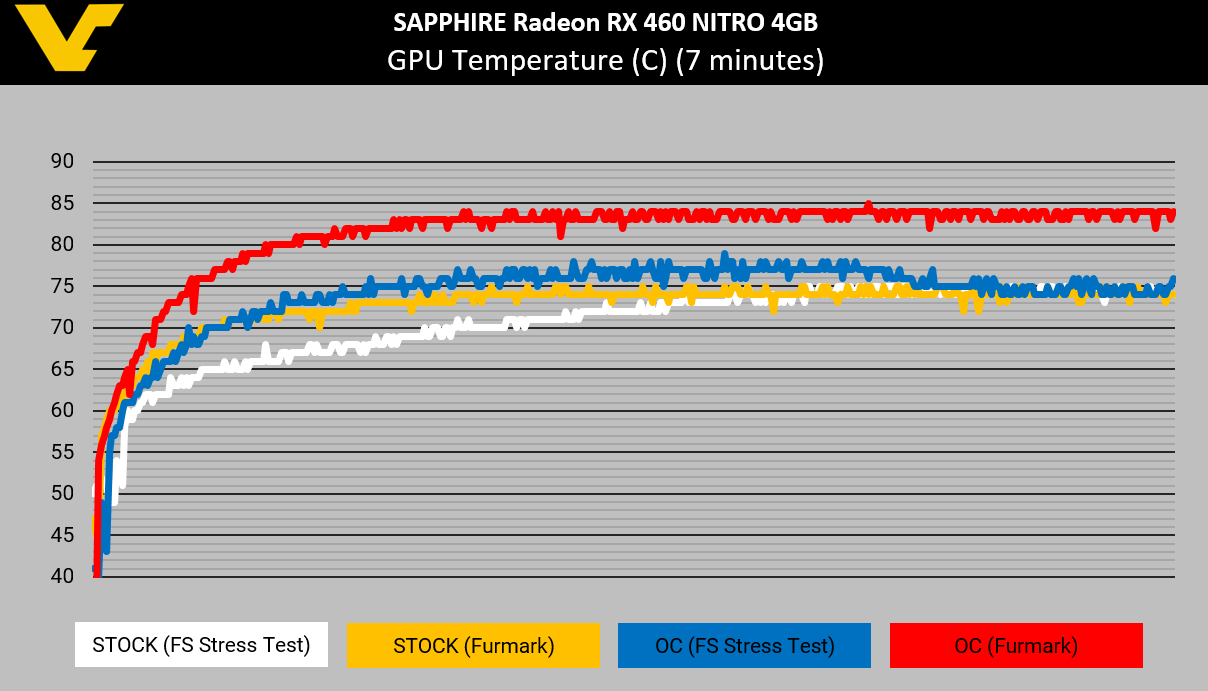 NOTE: For NVIDIA cards clock speeds listed in the charts below are representing boost values reported by GPU-Z (like shown here).

Performance: I think it’s quite clear that Radeon RX 460 is not meant to be used at Ultra settings in any game. Of course we knew about this way before performing those tests, however, this is not what we were testing here. In our tests we compare GPUs side by side at maximum settings to see where are the true limits of the particular card. I will also remind you that 4GB VRAM was put on this card for a reason. Mainly it serves as a buffer for more textures, so theoretically we should be able to enjoy better image quality without constant paging and blurry textures. I think RX 460 NITRO does a good just at that. There was no stutter in any game and all textures were loaded on time.

Performance-wise we have a GTX 950 competitor (manufactured in 28nm process). Considering that both cards share almost the same price, and GTX 950 was released one year ago, RX 460 performance is quite disappointing. Overclocking gave us few frames per second more, but it was at cost of much higher power consumption.

Cooling and design: NITRO’s Dual-X cooler is good quality. It has unique fan swap technology, which will make RMA process much easier. The cooler also has 0dB mode, which should be welcomed by those thinking of using RX 460 home theater PCs. Overall it’s efficient and quiet solution. For our overclocking we chose aggressive fan curve, which dramatically improved the temperature, but also generated much more noise.

Overclocking: If we were to compare our overclocking results of 1370 MHz to reference base clock (1090 MHz), then overall performance increased to 125%. Compared to reference boost clock (1200 MHz) we achieved 114%. It’s a good result, but as mentioned earlier, it required much more power to be delivered to the GPU. It wouldn’t be possible without extra 6-pin power connector.

Price and bundle: Sapphire RX 460 NITRO 4GB is currently available for around 140 USD. The cheapest GTX 960 4GB is available for around 180 USD, and GTX 950 for 140 USD. So the question is: is RX 460 4GB worth 140 USD? I think it’s little too expensive, even for a card with 4GB RAM, custom PCB and features of a more expensive model. Casual gamers should probably look at 2GB models, as they cost 30 USD less. However, I would recommend waiting for GTX 1050, which should theoretically compete with RX 460 at a similar price. Then we should have the full picture of what is going to happen with FinFET GPUs in this price segment.