Let’s look at some pictures. First up, the comparison between GPU in an idle state and under load. The backplate is quite hot regardless of the current use. Most heat escapes through the shark-fin shaped holes.

I promised we will take a closer look at Zero Frozr technology. Here you can see the EVGA SuperNova 850 G2 mounted right under the card is actually hotter than the card itself when Zero Frozr is off (in other words when fans are always in use). Otherwise, the heatsink takes most of the heat and it tries to dissipate it into the air inside the case. If you are using an open case like me, it shouldn’t really matter if the technology is enabled or not, but in a normal case that heat will have to go somewhere, so it’s crucial to provide a proper air flow.

MSI GAMING APP profiles and how they affect graphics card

As you might remember from our previous reviews, there’s not much of a difference between OC and Gaming modes on MSI Gaming cards. In most cases, the results will be almost identical, because 10 MHz difference is just too small to make an impact.

The following charts will give you a visual comparison between all three modes and our overclocking profile (white). Our aggressive (but still reasonable) fan profile is not very audible, yet it gave us 10C lower temperature.

The following chart shows the same data as above, except it also includes a 5-minute cool down. At 610 second mark, the temperature is no longer dropping for default profiles, because Zero Frozr technology kicks in and fans are no longer spinning, which results in a temperature rise. On the other hand, our custom fan profile keeps GPU much cooler, till it reaches 30C.

If we are looking at actual performance gain, it’s important to remember that GPU temperature and power limit both gradually adjust how your card is operating under use. Usually, after few minutes, we can finally see a stable clock, which in our example was 2029 MHz for manual overclocking.

If those graphs were showing straight lines, we would be observing a stable clock speed across all profiles. Unfortunately, all profiles suffer from power limit. We encountered the same problem with TDP at 117% when sample was manually overclocked (white plot):

I gathered several games (all using Ultra or Very High settings at 4K) to show you actual core clock when gaming: 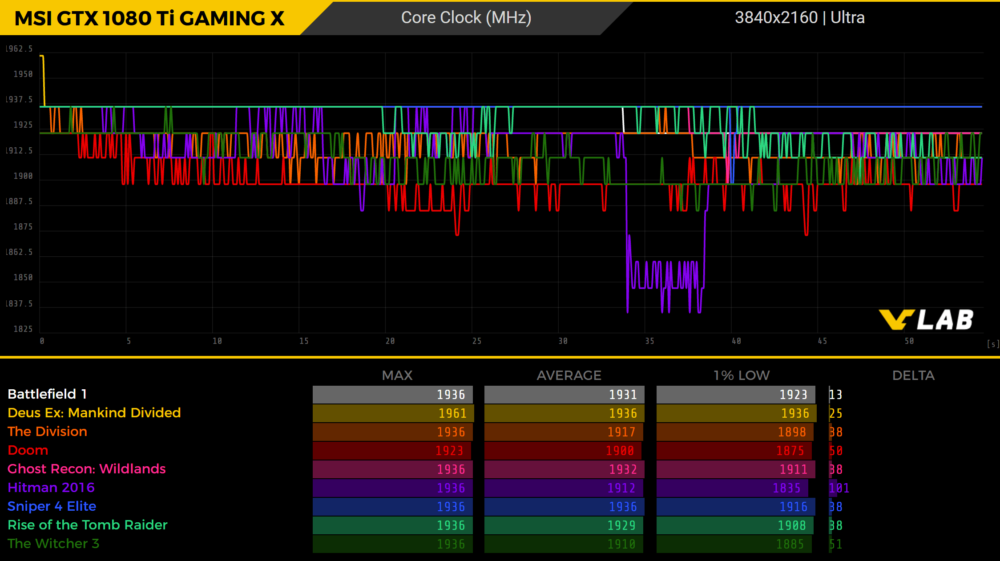 It’s really hard to utilize more than 10 GB with any GPU: 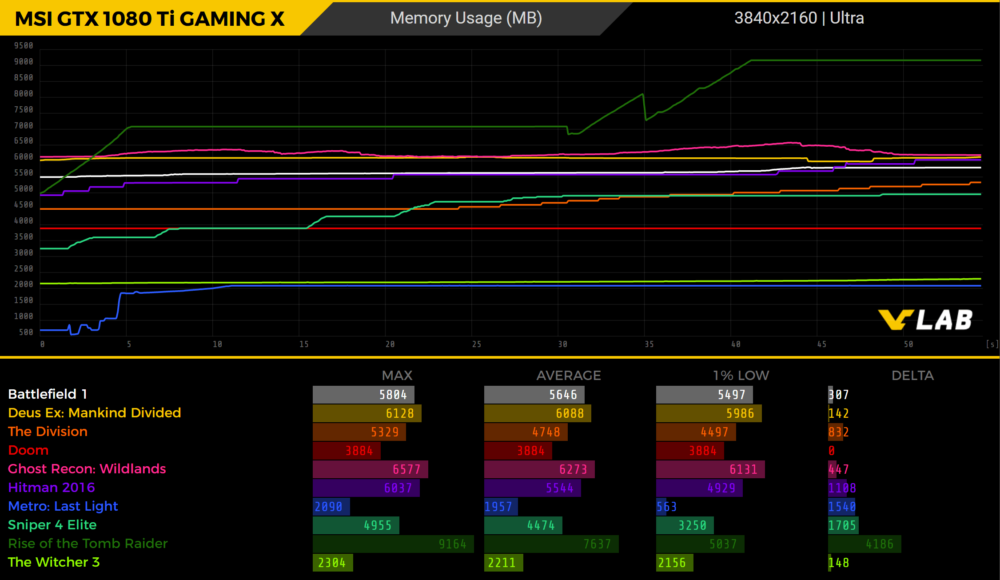