As we’ve shown you earlier, GTX 1070 Sea Hawk X suffers from a rather high clock frequency fluctuation. Normally all it takes to get rid of this problem is to raise TDP limit. This is not possible with the Sea Hawk, since the maximum TDP is 105% in BIOS. This means that we are just adding frequency to the card that is already capped by the power limit. However clock speed will still increase as games normally do not utilize 100% of GPU power, so there’s still room for overclocking.

In the end, we managed to increase the frequency by 150 MHz on the core and 400 MHz on the memory. 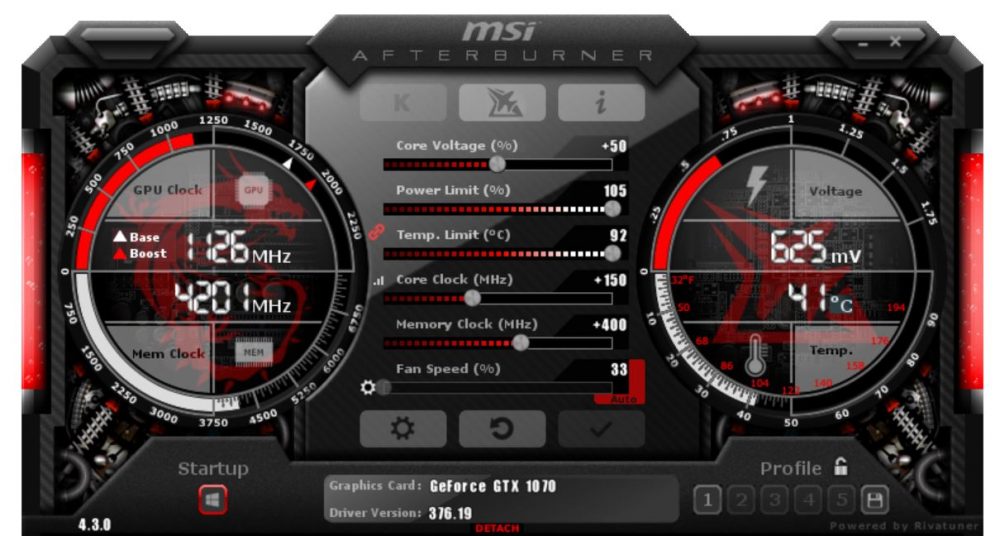 So here are all profiles and their clocks.

As you can see there’s not much of a difference between Gaming and OC Mode. Silent mode is essentially what you would expect from a reference-clocked card. Manual overclocking gave us on average 155 MHz more than Gaming mode.

As you might expect higher clock comes at the price of higher temperature, but that part was covered in our stability test, earlier in this review. Here I will only show you how manual overclocking affects fan curvature when applied. It was not modified, this is simply how GPU responds to higher temperature. Of course, let me remind you, this is just the blower fan on the card, not the fan on the radiator.