The MSI GTX 1050 Ti GAMING X is the latest product from GAMING series. This model is factory-overclocked to 1468 MHz out of the box. Bundled software (MSI GAMING App) gives you the option to choose between OC, GAMING and Silent Mode. Both retail and review samples ship with Gaming mode enabled by default, so this is the preset we are going to use in our review. 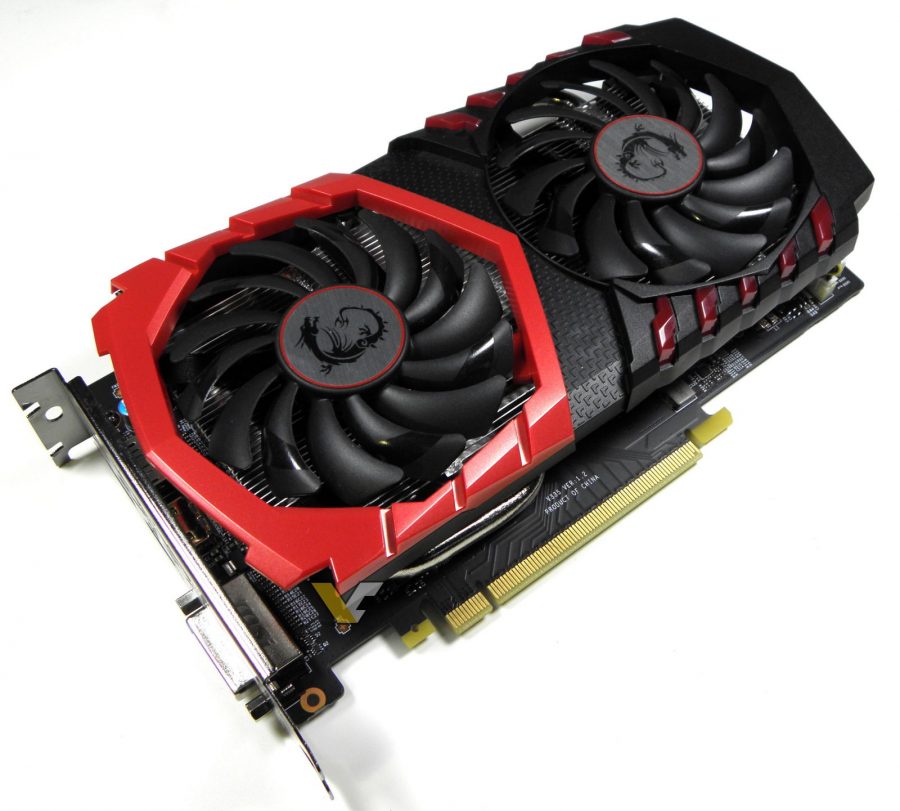 To this day, NVIDIA introduced five Pascal graphics processors. GeForce GTX 1050 series are in some way following the path of GTX 750 series, which as you might remember were based on Maxwell GM107. It was the smallest Maxwell GPU used for desktop graphics.

Right now GP107 is the smallest NVIDIA GPU from Pascal series. Nothing suggests we will be seeing GP108 in the future, but no one really knows what NVIDIA is up to in entry-level segment.

Pascal GP104-400 is the full graphics processor with 12 Streaming Multiprocessors, each holding 128 CUDA cores. This means that the full chip has 768 cores, 48 Texture Mapping Units and 32 ROPs. The full chip was used in GTX 1050 Ti, and this is how it looks: 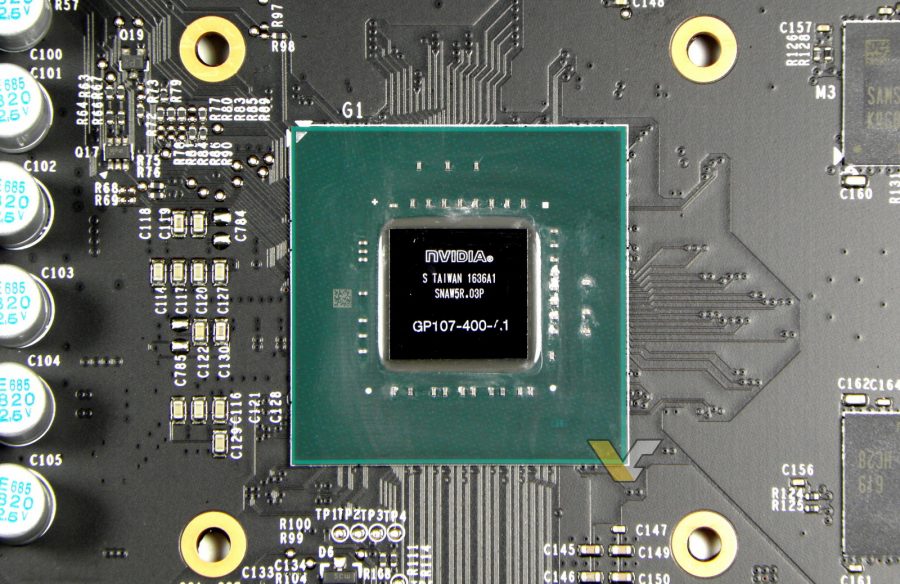 Now let’s look at the card. According to MSI, this card still features Twin Frozr VI cooler. The first thing that you will notice is the size of this card, this version is much smaller than GTX1080/1070/1060 Twin Frozr VI. It’s even smaller than TF5 from GTX 960 GAMING. 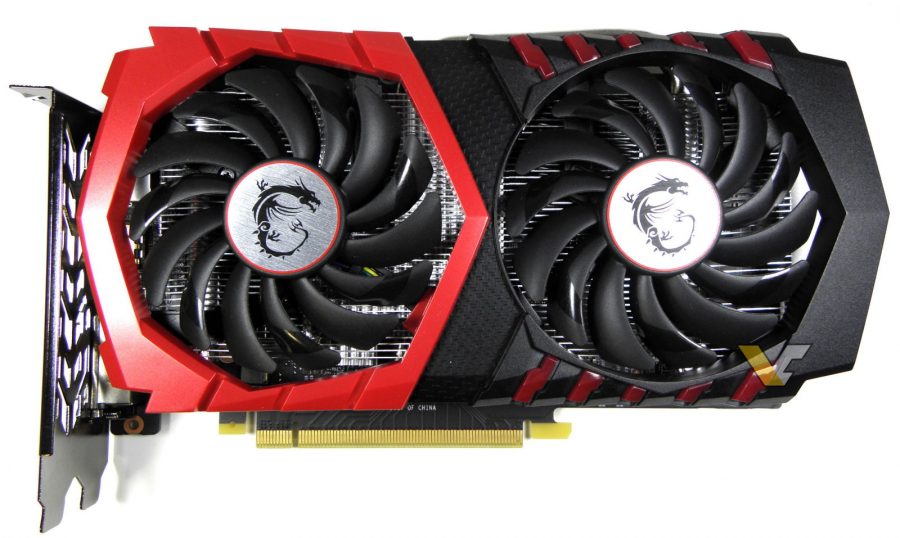 There is one heat pipe going through the base, which covers GPU and two memory modules (but only a part of the modules).

The cooler is attached by four screws and 3 cables (one is for the fans and the other are for LED illuminated GAMING logo and those ‘red fins’ on the right side of the cooler). 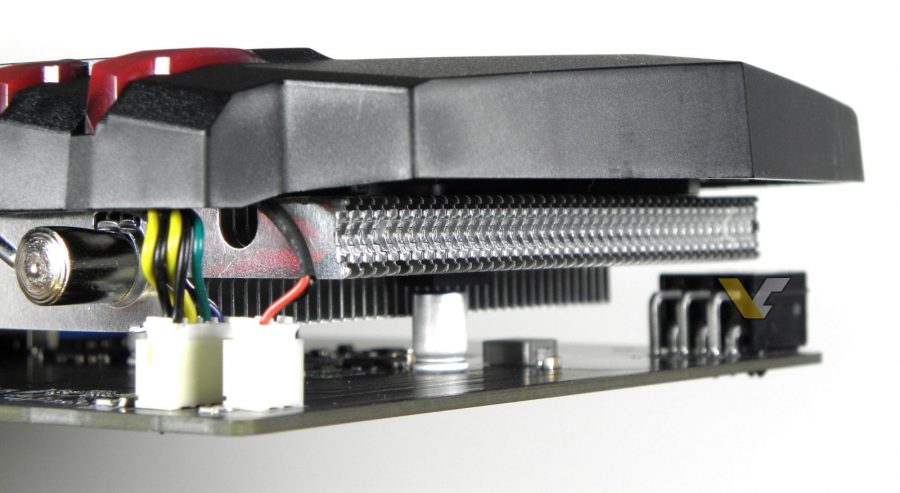 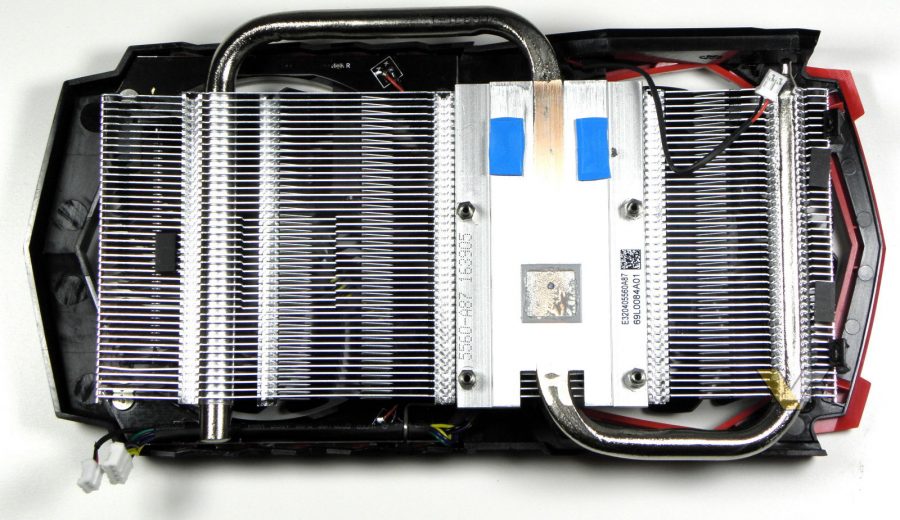 The PCB looks empty, but it has everything you would expect from entry-level graphics card. The most important customization is extra 6-pin connector. As you will learn it will help to keep GPU clock stable. 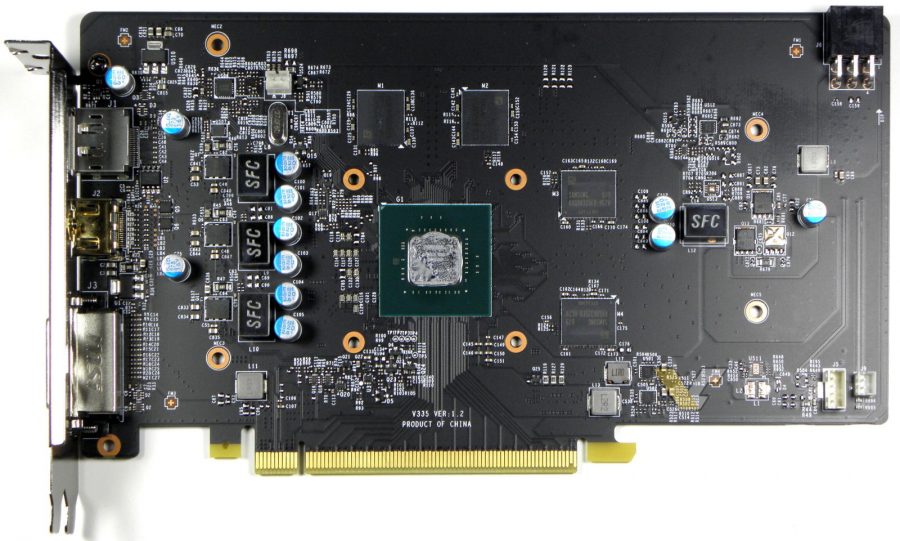 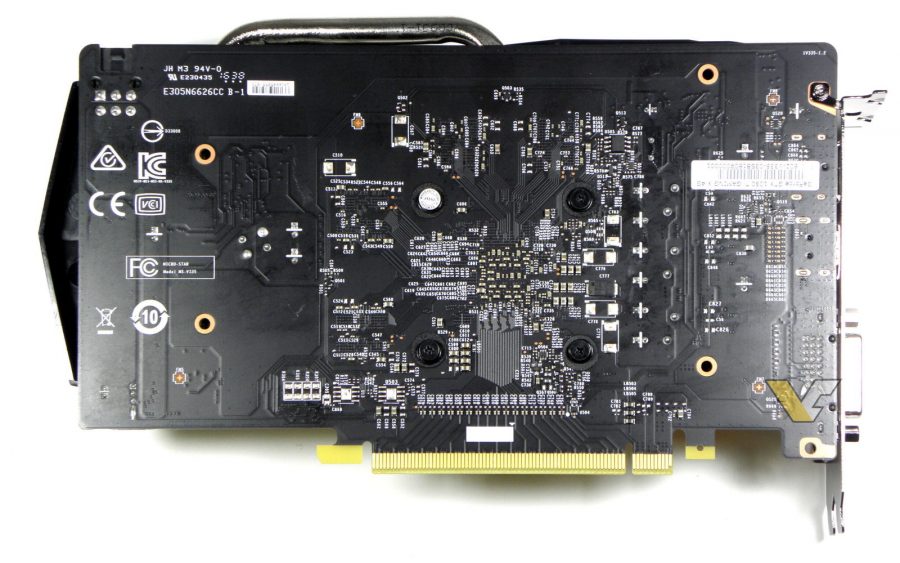 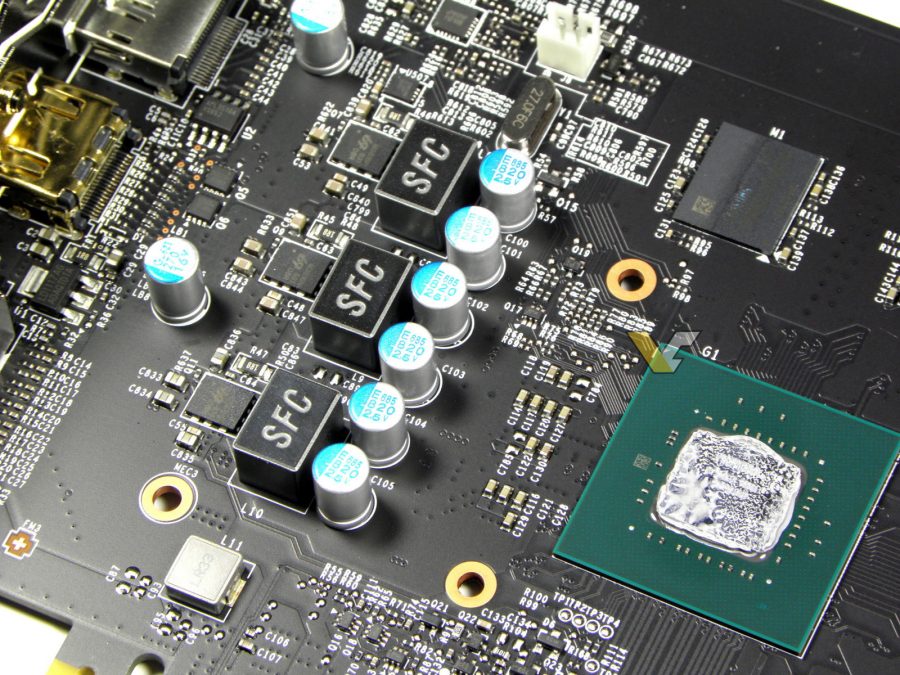 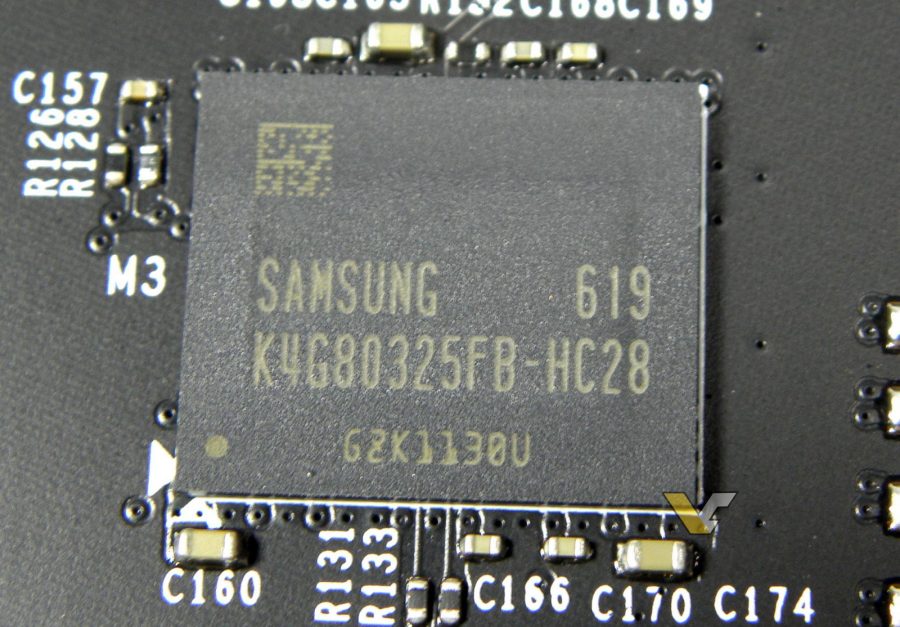 GeForce GTX 1050 series are currently locked to the maximum frequency of 1911 MHz. Same applies to the memory clock, which will not exceed 2002 MHz, no matter what we set. Some reviewers claim that the frequencies set beyond these limits still affect performance. Our overclocking was at the edge of this limit, so we were unable to verify if that’s true. 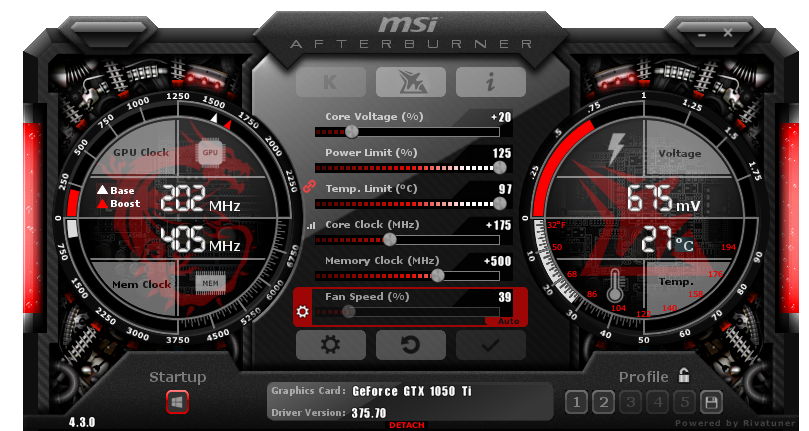 All results cumulated in one chart:

At stock, GTX 1050 Ti GAMING X does not exceed 63C in FS Stress Test. Our overclocking fan profile delivers temperature under 52C, which is a really good result.

As mentioned earlier, maximum boost clock will not exceed 1911 MHz when overclocking is applied. At stock, the frequency drops sequentially until it reaches 1733 MHz. Be advised that the straight line for overclocking may be somehow misleading. GPU driver simply does not show the real frequency once it reaches 1911 MHz.

The next graph is a good visual representation of how ZeroFrozr technology works. It takes a whole minute for the fan to even start spinning.

It is not easy to capture the difference between idle and load with thermal imaging camera, but this is the best picture we managed to take. As you can see even at idle, PCB temperature reaches 55C. Temperature raises by another 7C once the card is in use. 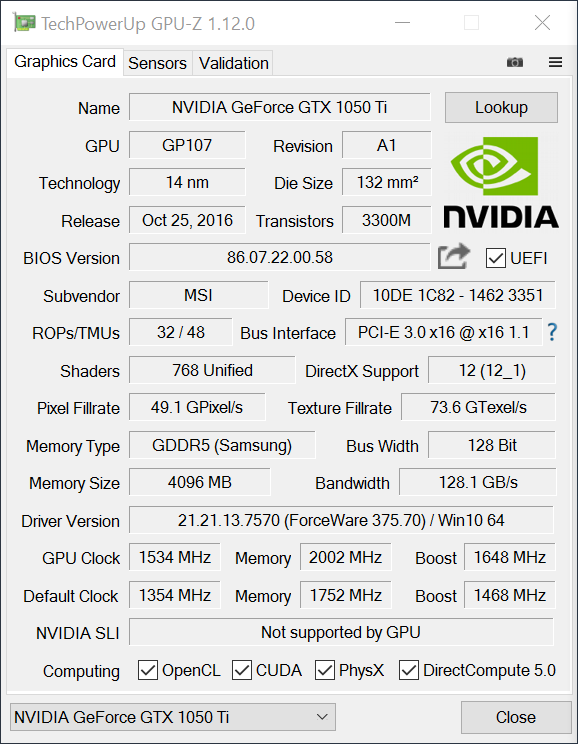