I think Batman Arkham Origins should be a synonym for poor optimization. Is the only title where I saw GTX 770 beats 290X. The difference between stock GTX980 and overclocked R9 390X is limited to few frames per second. 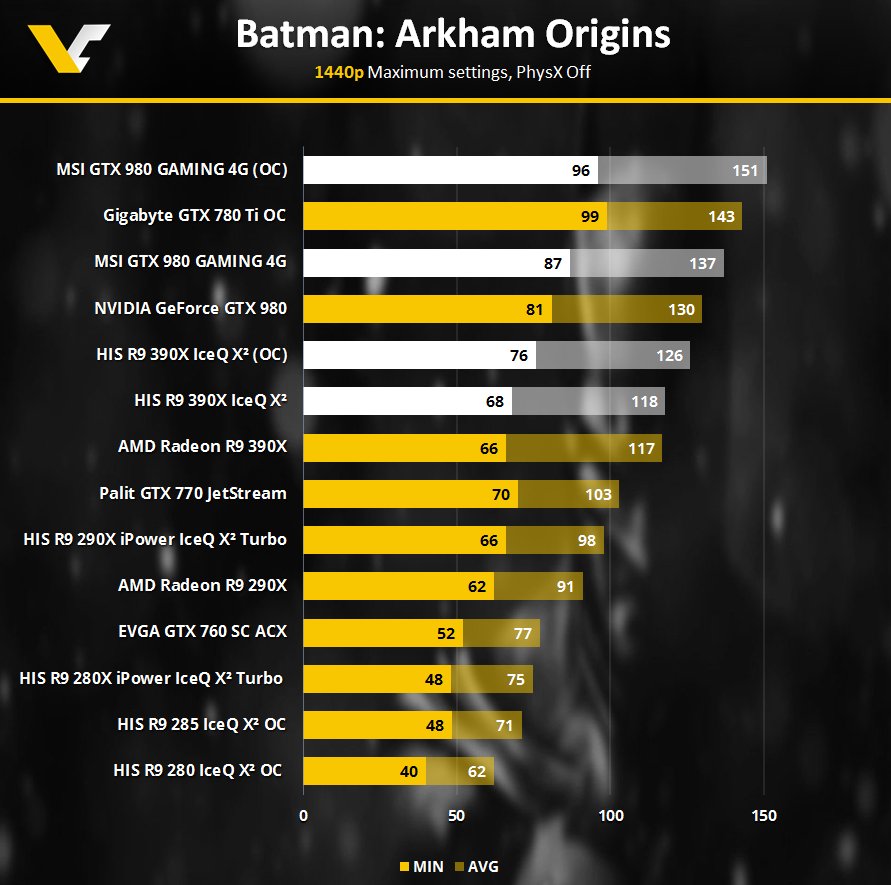 COH2 at maximum settings is very demanding title. It’s worth nothing that internal benchmark (which we used) has different camera angle than normal gameplay. So these values should be treated as the worst case scenario. HIS 390X and GTX 980 are so close that I had to use decimals to see the difference. 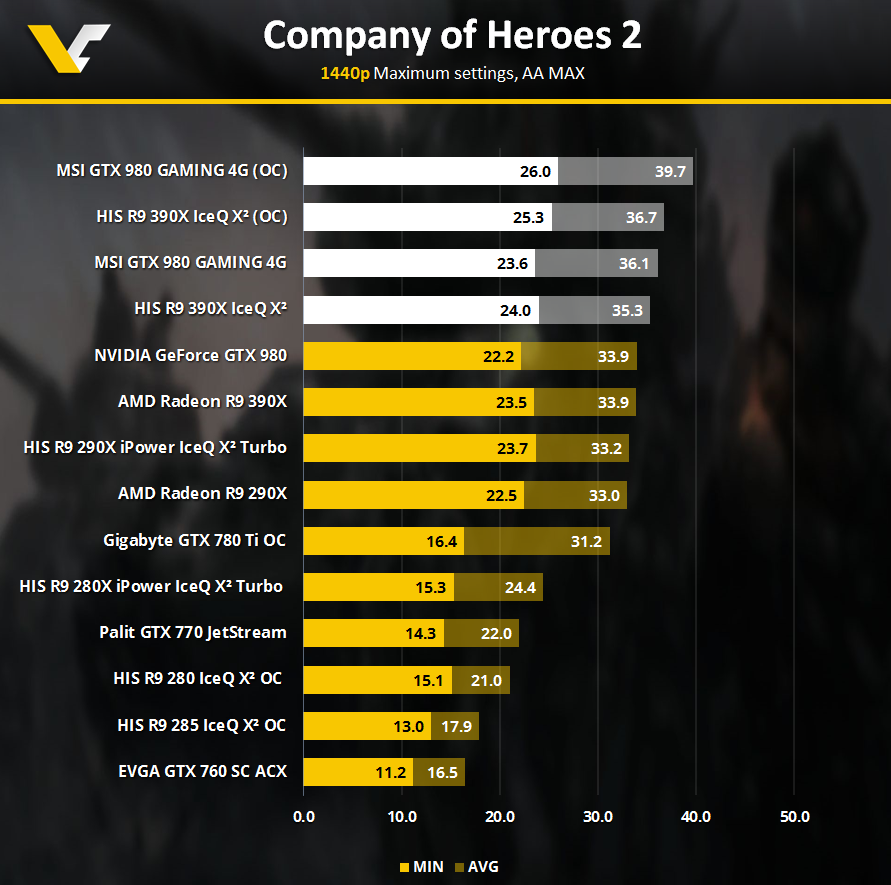 Another game that favors NVIDIA hardware for no particular reason is GRID Autosport. While other games can somehow utilize the full horsepower of Radeon processors, GRID lacks optimization. The difference between reference GTX980 and HIS 390X is just ~10 frames, but once we overclock 980 the gap increases in size to 12-21 FPS. 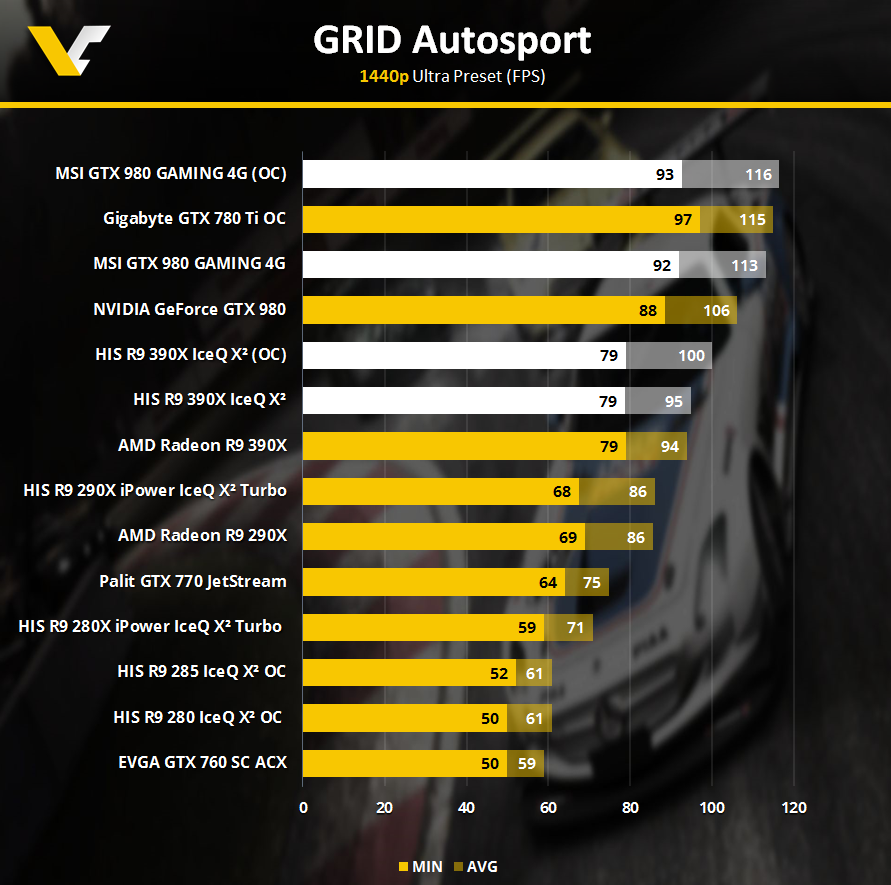 Finally the first game were R9 390X wins. In test we are using Ultra Preset with 8X AA. I agree that 8XAA is far from normal settings, especially when you have VSR, but I really wanted to put all cards to their knees. 8xAA is clearly something GM204 has problem keeping up to. 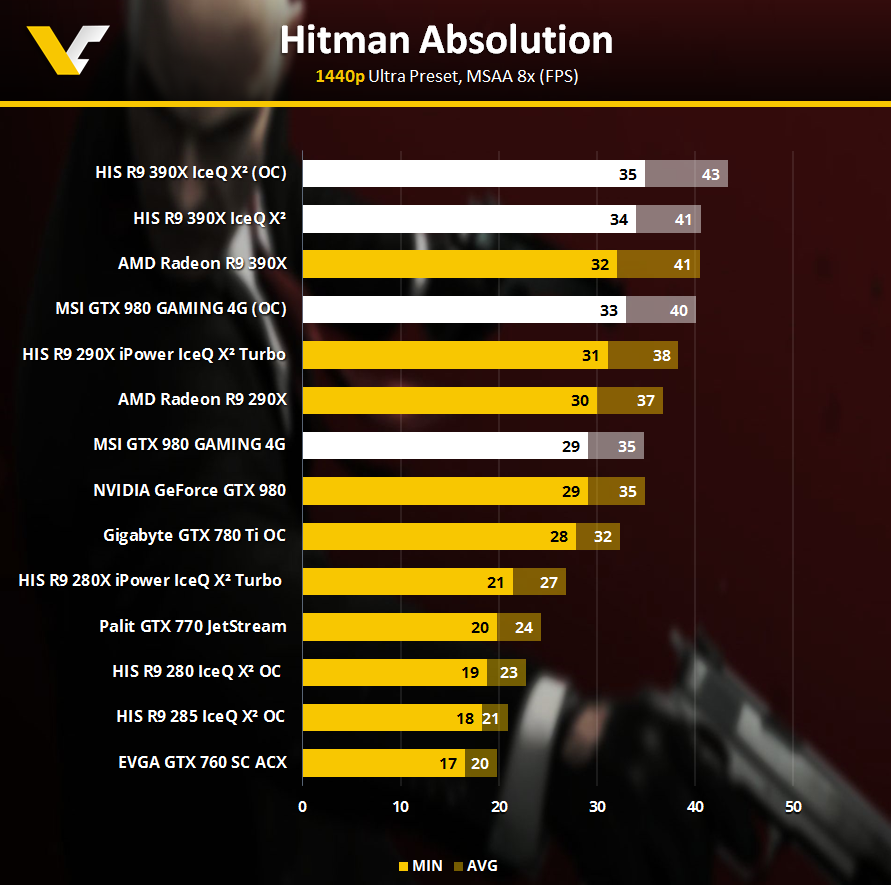 The average framerate of 390X is quite close to GTX980, but the minimum FPS is considerably lower. 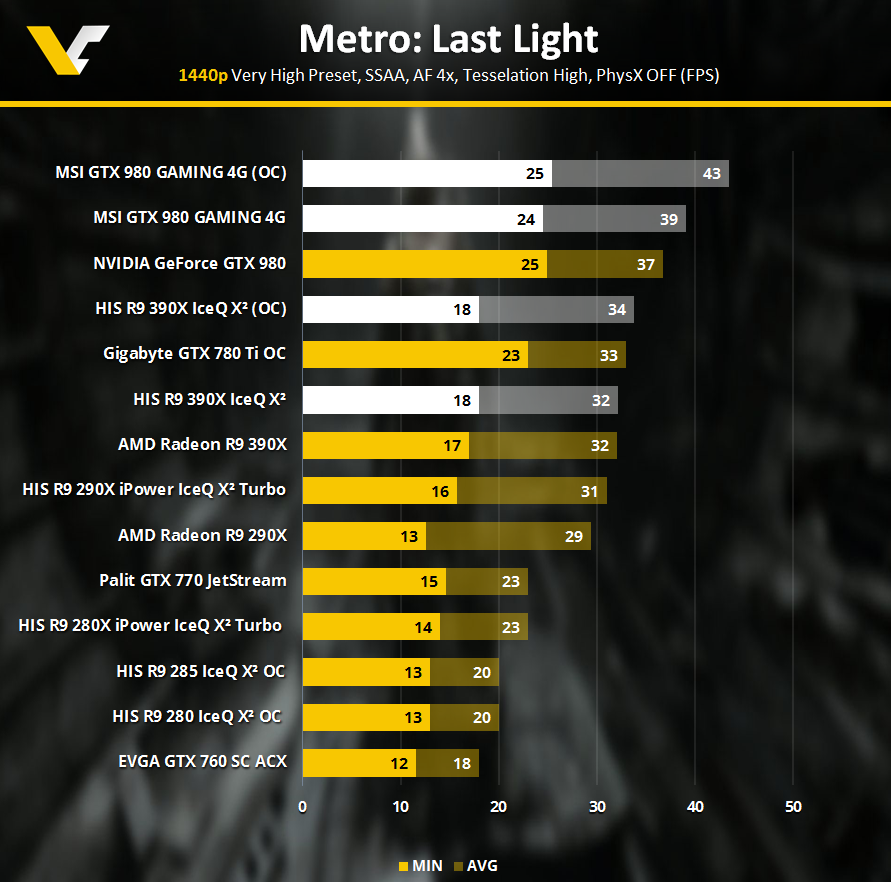 In THIEF the battle between GTX980 and 390X is limited to few frames. We can gain additional performance by enabling Mantle, which this game supports, however it was only enough for overclocked 390X to beat GTX980. I did not include Mantle scores here, because this API will soon be replaced by DX12. 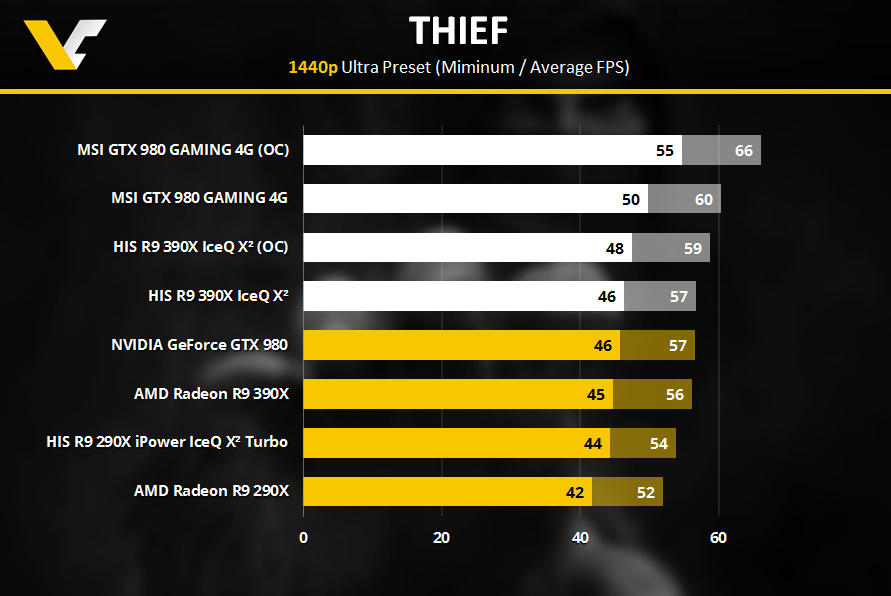 All high-end cards are very close to each other. Notice how fast is R9 390X in regard to R9 290X, that’s quite a difference. Grenada-based and GM204-based cards offer almost identical experience. 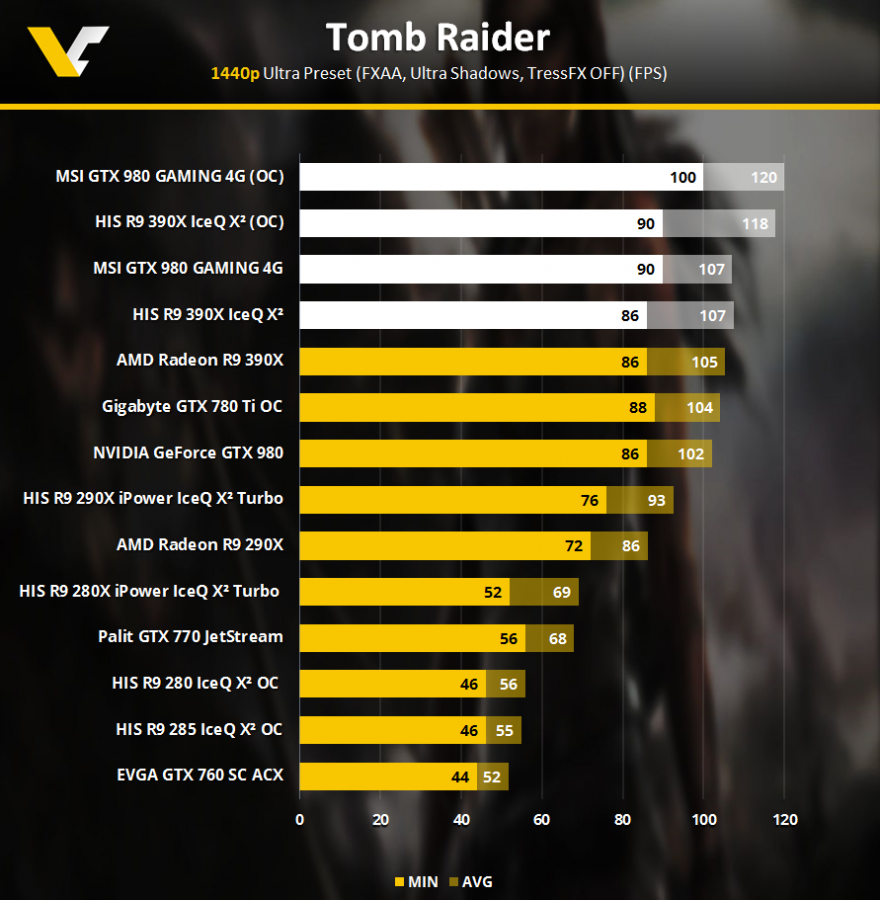 Mordor is the only game I could test 4k and 5k rendering. The R9 390X did better than GTX 980 in 2160p and 2880p resolution, this is where 4GB buffer is simply not sufficient. HIS 390X was faster than factory-overclocked MSI 980, but further clock adjustment brought these two cards almost to the same performance level. 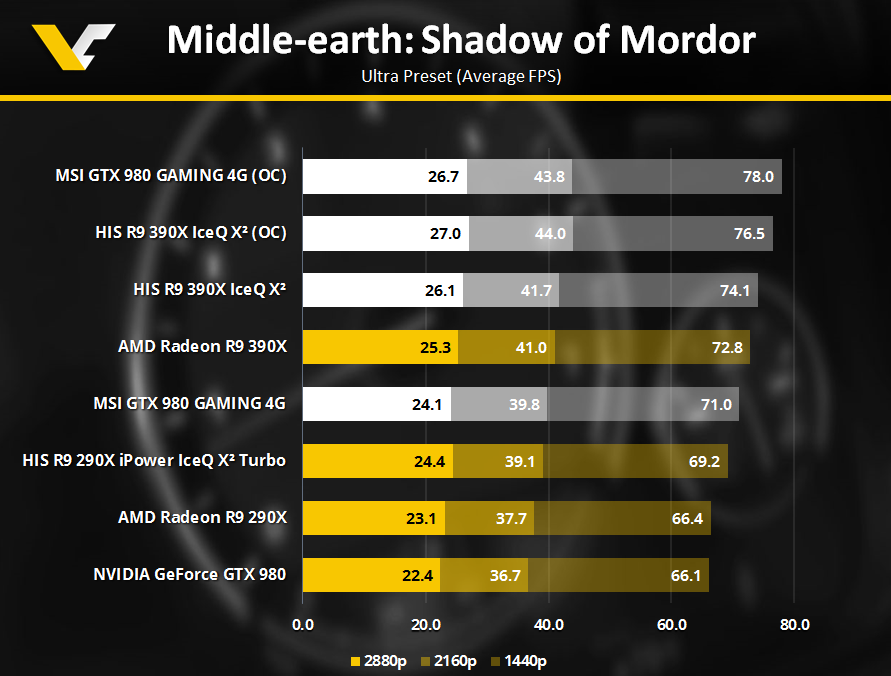