Normally I would post overclocking part at the very end of this review. However I really wanted to see how this card performs with higher clocks in all these tests, not just few of them. That said, I began my review evaluating the cooling efficiency of IceQX2 cooler.

Before we got into actual overclocking, we tested if default factory clocks are stable. To see if that’s the case we used Furmark, Valley and Metro:LL. Furmark is a power virus, this application should only be used to test clock stability and maximum temperature, it does not illustrate gaming experience. Furmark is the worst case scenario for the GPU, something that should never happen during normal gameplay. So why are we still testing with Furmark? Well, if the clock remains stable through Furmark burn-in test, Unigine Valley and any chosen game, then we can almost be sure no issues shall appear during further testing.

First scenario is default configuration. The core voltage slider at +25mV is set for the card out of the box. Unfortunately it starts to throttle once it reaches 83C. The clock oscillates between 800-1065 MHz.

83C shouldn’t be a problem for Hawaii-based cards, so I assumed it’s the power limit that is keeping us back from reaching higher clocks. By increasing it to maximum value (+50%) the card stopped throttling, until it reached 91-92C temperature. This is where the power limit ended and temperature limit kicks in.

Just to be sure we also checked if those drops are anyhow connected to core voltage. Obviously, that was not the case, rising the voltage only made the GPU run hotter (+2C), but sudden frequency drops happened less often. Those drops usually meant screen freezing and clock going to 550-600 MHz. Trust me when I say it is not the best experience.

To eliminate those drops we had to make sure card runs at sub-90C temperatures, and for that there is only one solution — custom fan profile. Only with custom fan profiles we achieved stable clocks, and by stable I mean no throttling or any artifacts during tests.  The card itself became noisier, but during our 8 minute test it never reached 80C, which is very good. 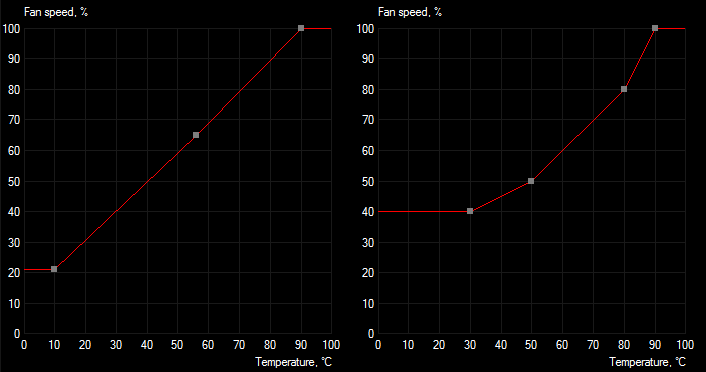 Immediately after making sure the clock is stable we started the overclocking process.

We managed to achieve 1110/1710 MHz clocks (for GPU and memory respectively). That’s a 60/210 MHz gain over reference model. The memory bandwidth is already very high, so adding those extra 210 MHz did not have any substantial affect on performance. It is however very interesting we reached 438 GB/s bandwidth, which is just 74 GB/s under R9 Fury X specs.

In this review we are focusing on R9 390X, that said I will only mention what are the highest stable clocks with Twin Frozr V cooling installed on GTX 980. This card is simply amazing in terms of overclocking. .

With no hassle we overclocked GTX 980 by 106 MHz, which is already 268 MHz above the original specs. I did my best to reach 8 GHz effective memory clock, but I was stopped by artifacts at 1955 MHz. Here is the screenshot from Afterburner. 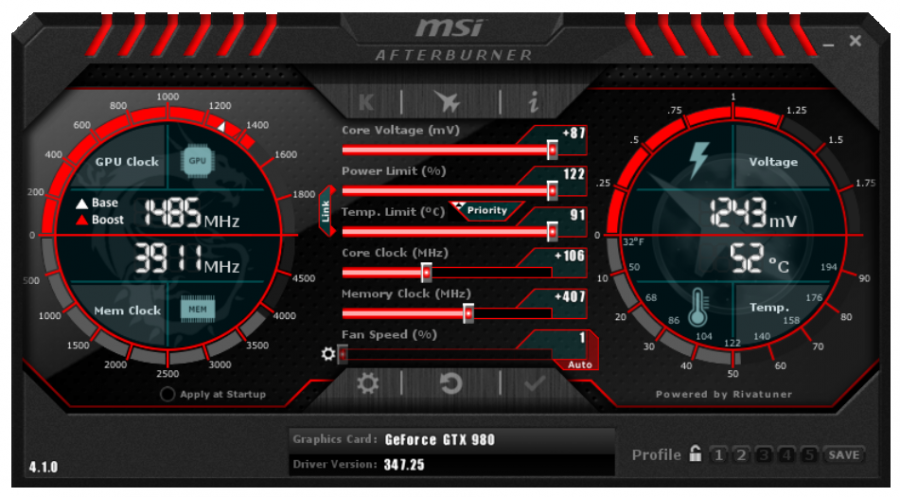