Radeon R9 280, which is a direct rebrand of Radeon HD 7950 “Boost Edition”, was officially introduced March this year.

Radeon R9 280 equipped with Tahiti graphics processor is the slowest Radeon card in this review. The R9 280 features Tahiti PRO GPU, offers 1792 Stream Cores, 112 TMUs and 32 ROPs. The sample from HIS is clocked at 847/953 MHz, which is exactly 20 MHz higher than reference model.

All Tahiti-based graphics cards are equipped with at least 3GB GDDR5 frame buffer. R9 280 is no exception. In comparison to Tonga, Tahiti has wider bus and therefore higher bandwidth. This should theoretically provide a better experience at higher resolution.

Radeon R9 200 series from HIS were introduced with new color scheme of IceQX2 cooler. The decision to use gold cooler shroud was met with mixed feelings. These cards would probably look better if the PCB was black, instead we have gold and blue mixture, which may not be to everyone’s liking. After looking at official photos you might think that this card is beige, but it’s not. The cooler is actually metallic gold.

The latest installment of IceQ X2 features two 89mm dual axial fans. The cooler is made of large heat sink interpolated with five heat pipes (three 6mm and two 8mm). Each of these heat pipes is connected to a copper base which resides on the GPU

The IceQ X2 cooler is also equipped with a support baseplate (called Metal Rib), that is responsible for memory cooling.

According to HIS, this unique cooler design produces only 28 dB when doing daily tasks, such as watching movies or working.


HIS Radeon R9 280 IceQ X2 series are equipped with fully-custom board. It has 9 PWM phases (6+1+1+1) which is one more than reference design. The PCB has quality components including solid capacitors and ferrite inductors. HIS R9 280 series are armed with CHil CHL8228G digital PWM controller, helping to keep voltages stable during overclocking and every day use.

In the package you will find the manual, DVI-VGA adapter, drivers and a sticker. 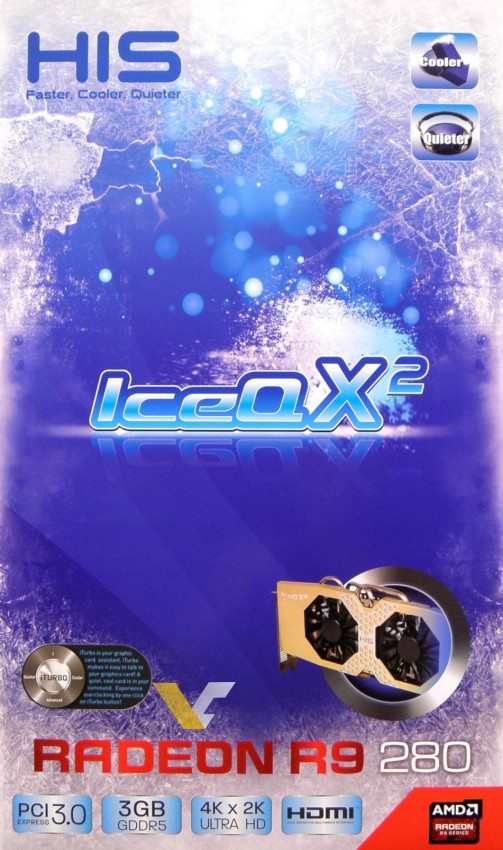 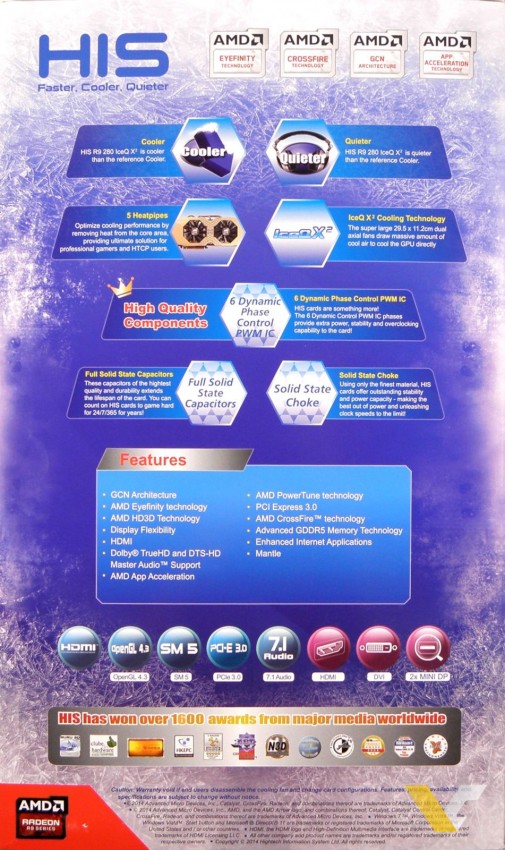