As you know graphics cards are mainly limited by TDP. Few years ago one would simply rise the clock and then increase the voltage if necessary. Today it’s not that simple. Since TDP is now the main focus, voltage should be adjusted only when the clock speed is not stable.

Bear in mind that each and every card in this review came factory-overclocked, so while further adjustment are still possible, they are not as big as you might expect.

When overclocking Radeon cards it’s very important too look at GPU temperature. We are not looking for insane clock speeds just to claim our cards are the fastest. We are looking at good performance with reasonable noise and temperature levels.

HIS Radeon R9 280 turned out to be great overclocker. We managed to put this card through 3 tests with minimum clock variation.

While HIS R9 285 is capable of running at 1050-1060 MHz, it is strongly advised not to. During my tests with 1050+ MHz frequency the fan would operate at 3000 RPM. I measured the noise during such scenario and it reached 64 dB. That’s something I could simply not tolerate.

A small decrease to 1040 MHz limited the fan speed to 2500 RPM, delivering much better experience. In the end we are getting 13% better clocks than reference model, which is not bad at all.

Some R9 290X samples are just not designed for overclocking. Our card is a good example. Any further overclocking brought significant increase of temperature. We could live with that, because IceQ X2 cooler was still doing great job, although we started seeing artifacts, and that’s something we cannot accept. The final results were just 6% better clocks.

EVGA GTX 760 was the slowest card in our test. Factory-overclocking was already high, delivering 10% higher frequency. We managed to add even more juice, but it wasn’t enough to consider it much faster.

Gigabyte’s GTX 780 Ti has the highest factory modified clock speed in this test. It comes with 17% better clock speed at 1085 MHz.

It’s worth noting that this clock is just a starting point for GPU Boost to operate. It means that in different scenarios it will clock somewhere between 1100 and 1170 MHz, depending on how GPU is utilized. By adding an extra 73 MHz we set the GPU to start with 1158 MHz, so the end results is much higher. During game tests clock speed varies between 1180-1222 MHz. On the other hand during stress testing with Furmark this value does not exceed 1200 MHz.

Tahiti-based Radeon R9 280 series did exceptionally well in this test. Despite shipping with already non-reference speed, we were still able to squeeze more juice with aggressive clocks. Radeon R9 280 managed gained 12% better synthetic performance, while R9 280X 9%. Tonga-based R9 285 managed to get ahead of R9 280X with default clocks. 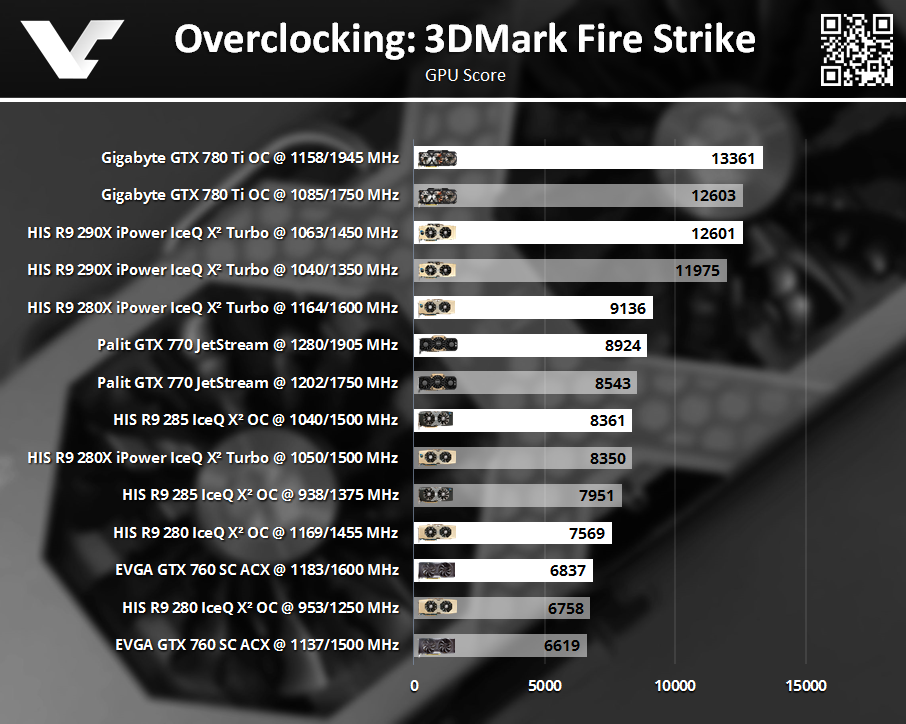