The most powerful GeForce GPU made to date.

Earlier this month, Colorful launched three RTX 4090 GPUs: Deluxe, Vulcan and Neptune. The iGame Vulcan is the premium design with an air cooler. We specifically requested this card for a test because we had already tested the predecessor. Therefore, we had a chance to see what improvements have Colorful made in 2 years. 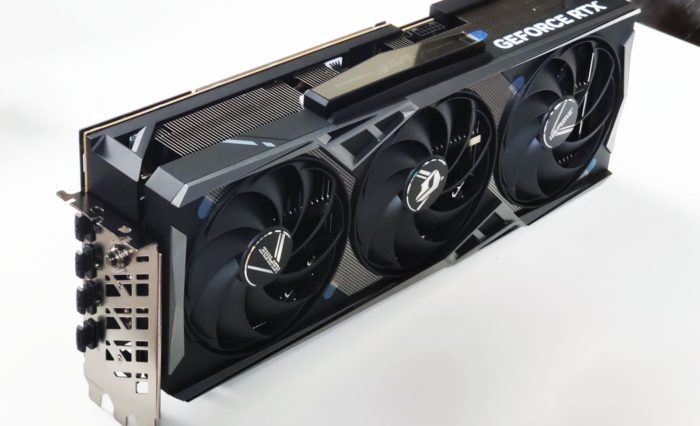 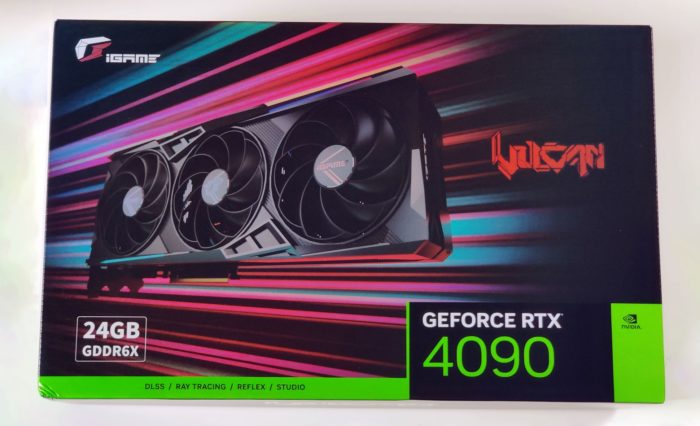 In this mini-review, we will focus on the features and basic performance evaluation. We will test the card in synthetic tests, check 4K gaming performance and verify its overclocking potential. This is not a comprehensive review, but a brief look at the card.

The RTX 4090 is based on 4nm Ada Lovelace architecture. This model is equipped with AD102-300 GPU with 16384 CUDA cores. It ships with the same 24GB GDDR6X memory as the RTX 3090 Ti model. The card is equipped with a massive 3.5 slot design, and it weights 2.5 kg. This is one of the heaviest cards Colorful has ever made.

A quick look at the card itself, and the immediately impressions are good. It’s relatively a simple design with dark gray color scheme, full metallic backplate and minimal RGB lighting, compared to all Colorful models we tested (and there were many!). 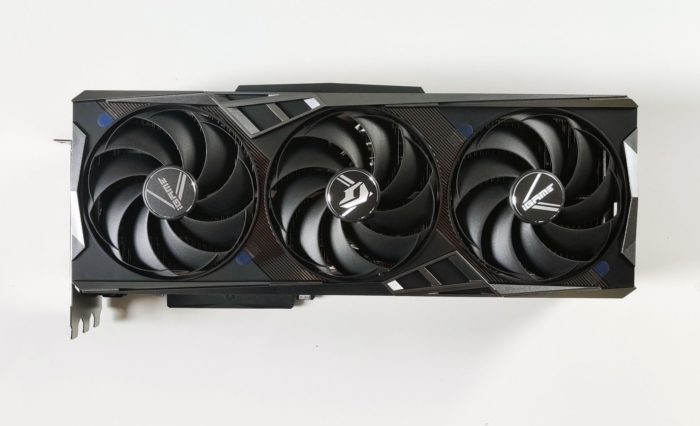 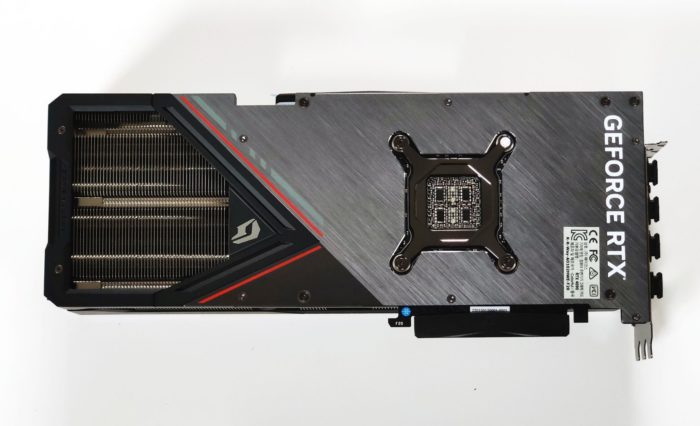 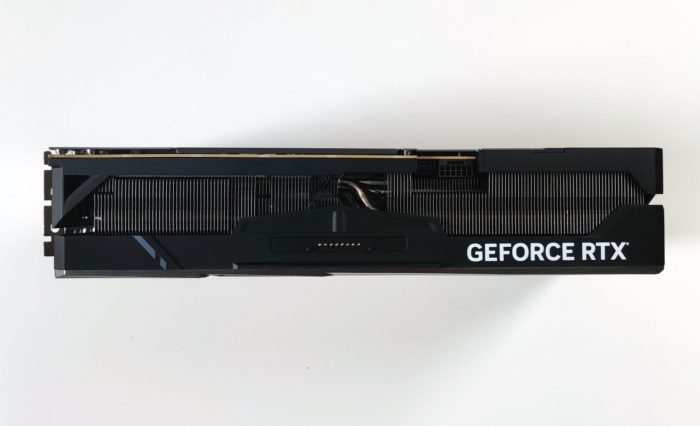 What must be said is that this card is massive. Compared to RTX 3090 Vulcan, it is thicker, longer, heavier and has a much more sophisticated power delivery system.

The card is equipped with four display connectors, three DP1.4a, and one HDMI 2.1 output. The card has 24GB of Micron D8BZ memory rated at 21 Gbps. The upgrade over RTX 4090 series is denser capacity, this model no longer requires dual-sided memory, and as a result, the backplate does not have any type of cooling.

This card comes with a very interesting bundle. Apart from the 4x 8-pin to 16-pin power adapter, customers will also receive a VGA support bracket, small screw driver and a small full-color screen. This screen is not pre-installed on the card itself, it can be removed and placed on a small, USB-powered holder. The screen attaches to the card by magnets and uses pogo-pins. Interestingly, it can be placed on the card either vertically or horizontally. 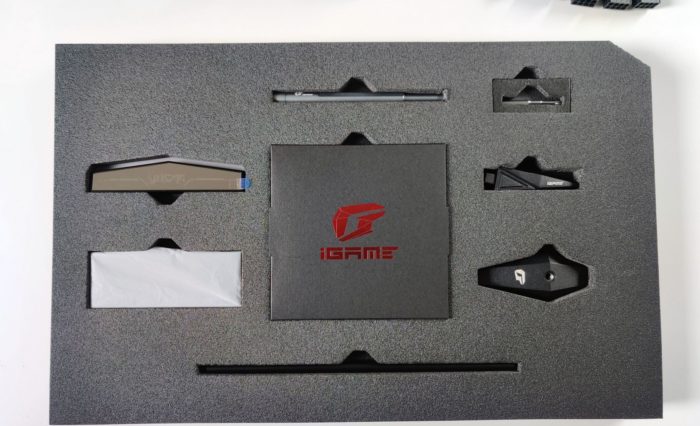 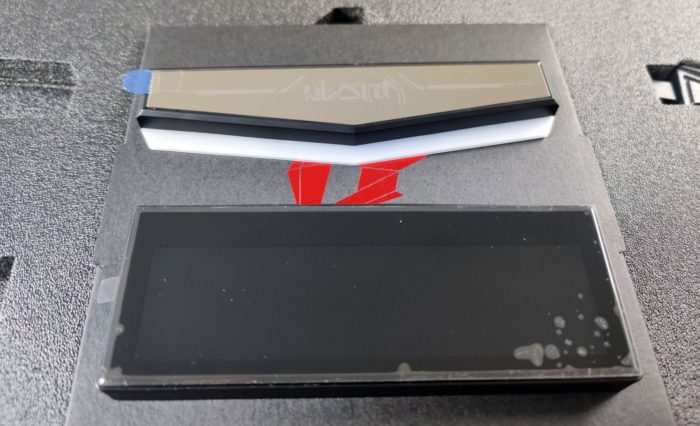 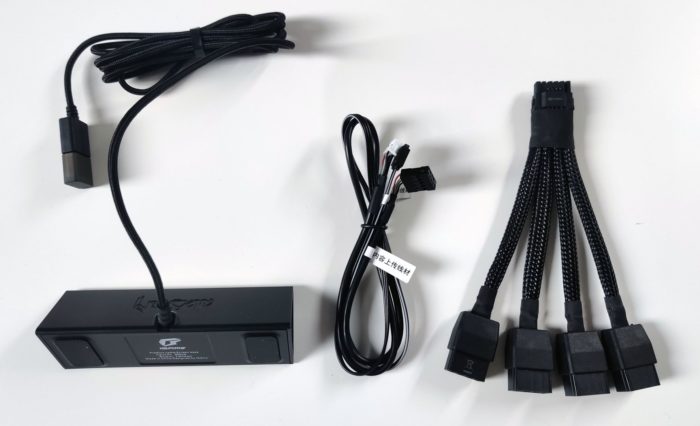 The card comes with NVIDIA standard power adapter for quad PCIe 8-pin to 16-pin connector. As for the screen, it seems to work fine, but official software has no support for it yet. 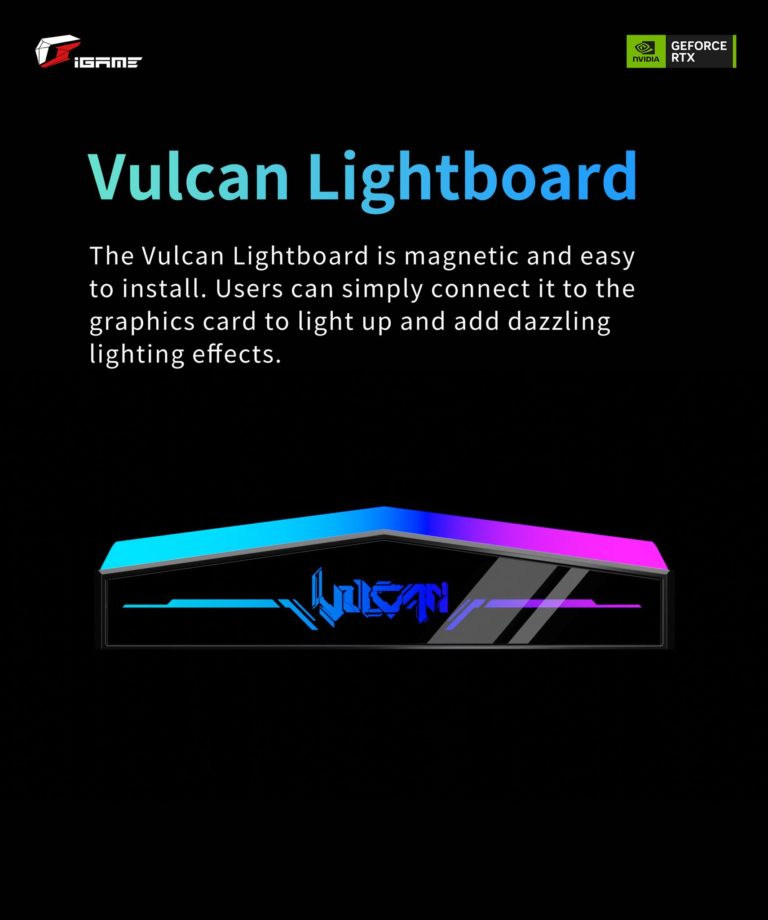 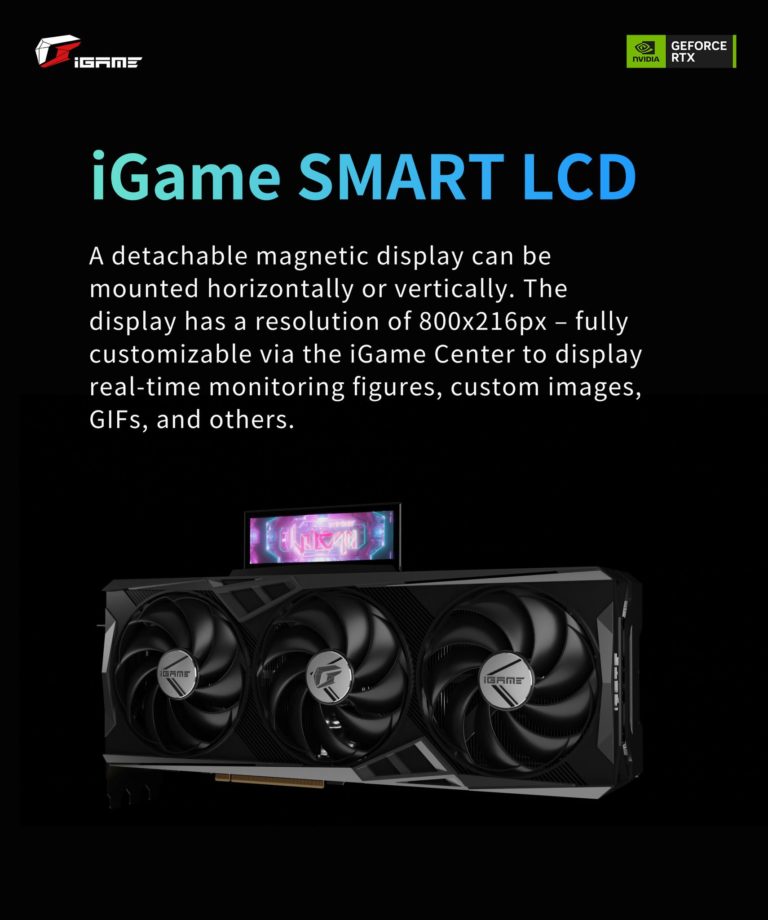 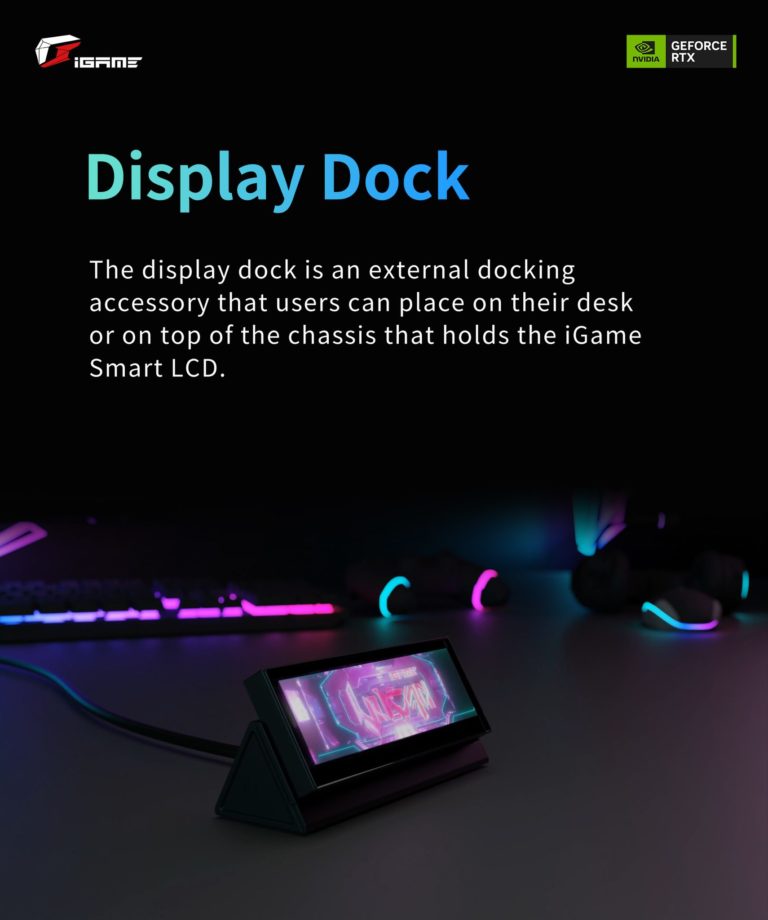 Colorful RTX 4090 iGame Vulcan has dual-BIOS feature. By default, it ships with 450W TDP setting, however users may choose 515W BIOS with support for 550W overclocking. With this BIOS, we were successful in adding an extra 185MHz to the GPU core clock and 1225 MHz for the memory. The card looses stability with any other settings.

The card seems to be capped up to 463W on average, as long as software sensors are considered. This overclocking results in 6% higher performance. 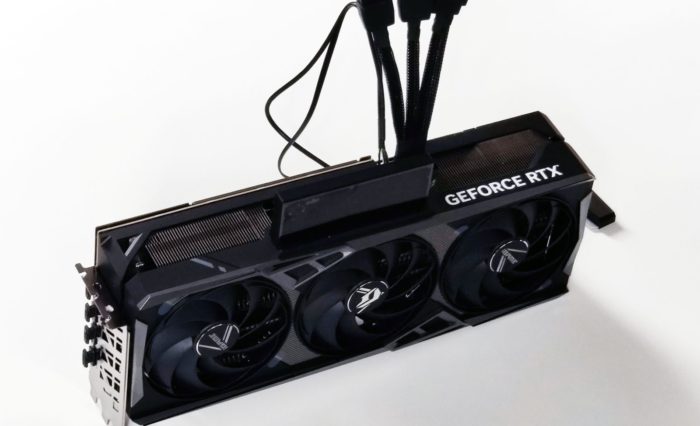 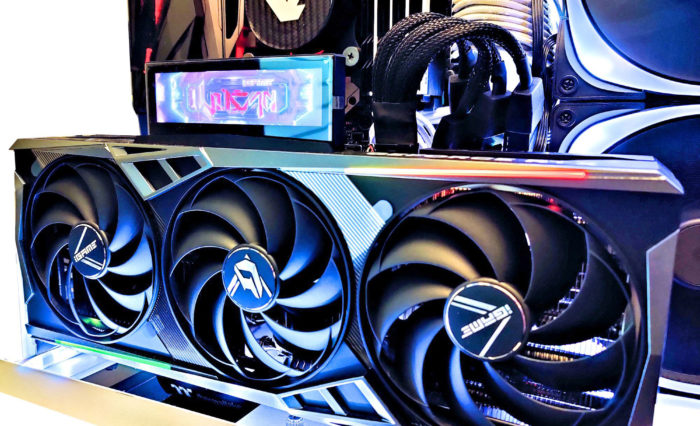 The RTX 4090 iGame Vulcan is a premium design with interesting features. A nice touch is the built-in screen that can be detached and replaced with an RGB illuminated part (called Vulcan Lightboard). The OC button will probably provide enough performance for most users without any manual overclocking involved.

Colorful’s new Vulcan design is a very heavy card, but it comes with a VGA support bracket for systems with standard horizontal installation. As we can see, we tested the card with vertical mount and PCIe riser on a relatively old system. Even with those limitations, performance was still great and matched other RTX 4090 cards in terms of raw synthetic performance.

We have not observed any power related issues with this model, in fact, it barely went over 500W which is the default power settings for the OC mode. The NVIDIA supplied cable has not shown any thermal issues (tested with thermal camera). The card is also equipped with very efficient cooling solution. Throughout our testing we have rarely seen temperatures above 70°C and that’s including overclocking.

Colorful RTX 4090 iGame Vulcan OC has official price at $1,769 which is $171 over NVIDIA MSRP. At this price you some extra bundle, such a screwdriver, VGA support bracket, 16-pin power adapter and obviously the full color detachable screen.

Learn more about the product here.