Beijing, CHINA, August 10th 2021– Xiaomi today took another bold step in the exploration of future technology with its new bio-inspired quadruped robot – CyberDog. The launch of CyberDog is the culmination of Xiaomi’s engineering prowess, condensed into an open source robot companion that developers can build upon. 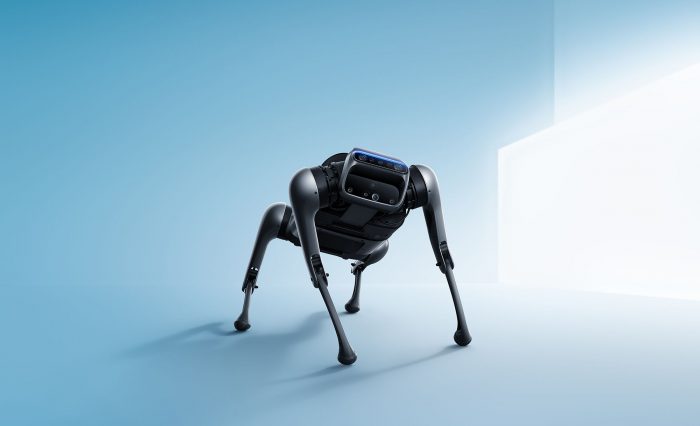 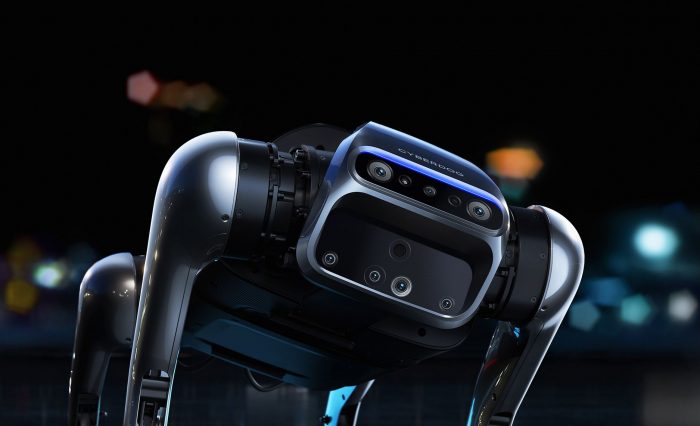 CyberDog is Xiaomi’s first foray into quadruped robotics for the open source community and developers worldwide. Robotics enthusiasts interested in CyberDog can compete or co-create with other like-minded Xiaomi Fans, together propelling the development and potential of quadruped robots.

CyberDog is calibrated with Xiaomi’s in-house developed servo motors that translates into great speed, agility, and a wide range of motion. With a maximum torque output and rotation speed up to 32N·m/220Rpm, CyberDog is able to conduct a range of high-speed movements up to 3.2m/s and complicated actions such as backflips.

To fully model biological organisms, CyberDog is equipped with 11 high-precision sensors which provide instant feedback to guide its movements. This includes touch sensors, cameras, ultrasonic sensors, GPS modules, and more, giving the CyberDog enhanced capability to sense, analyze, and interact with its environment. 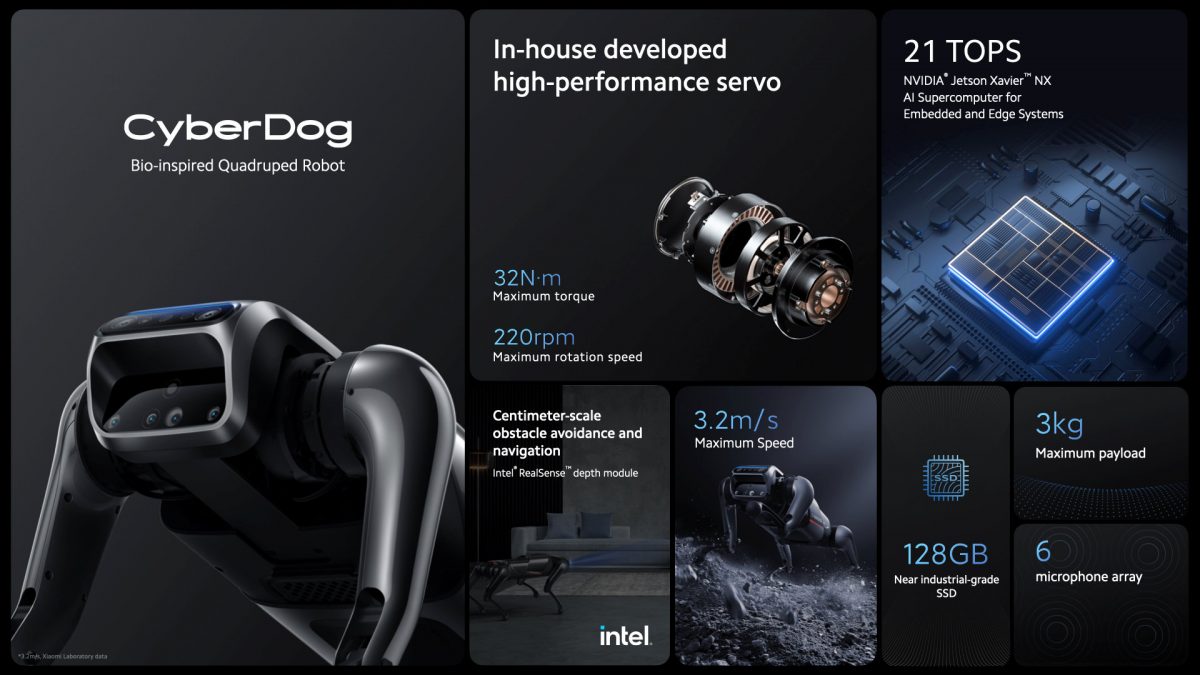 Thanks to Xiaomi’s smartphone imaging technology, CyberDog has enhanced capability to perceive its surroundings. It comes embedded with an array of camera sensors including AI interactive cameras, binocular ultra wide angle fisheye cameras, and Intel ® RealSense™ D450 Depth module, and can be trained with its computer vision algorithm.

Built upon this vision sensor system are autonomous object tracking, SLAM, and centimeter-scale obstacle avoidance and navigation. This means that CyberDog can analyze its surroundings in real-time, create navigational maps, plot its destination, and avoid obstacles. Coupled with human posture and face recognition tracking, CyberDog is capable of following its owner and darting around obstructions.

To add to its pet-like nature, users can use voice assistants to command and control CyberDog by setting a wake word, or simply use its accompanying remote and smartphone app. CyberDog can be called on for the most unique tasks, and the ways in which it can be interacted with holds unforetold possibilities.

CyberDog is also developed with rich external interfaces that include 3 type-C ports and 1 HDMI port, so developers have the freedom to explore and integrate a wide range of innovative and creative hardware add-ons or software systems, be it a search light, panoramic camera, motion camera, LiDAR, or more. 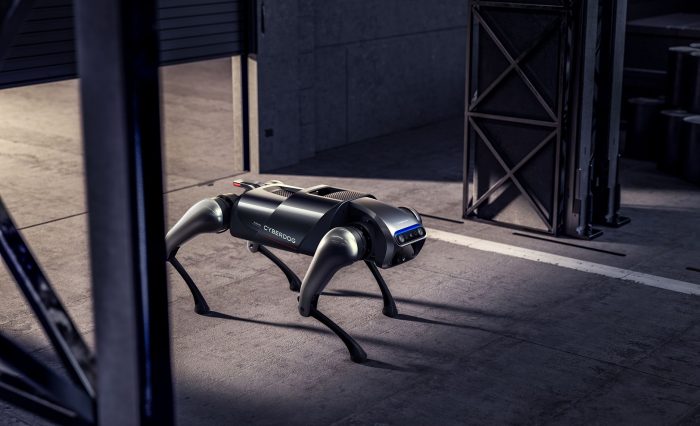 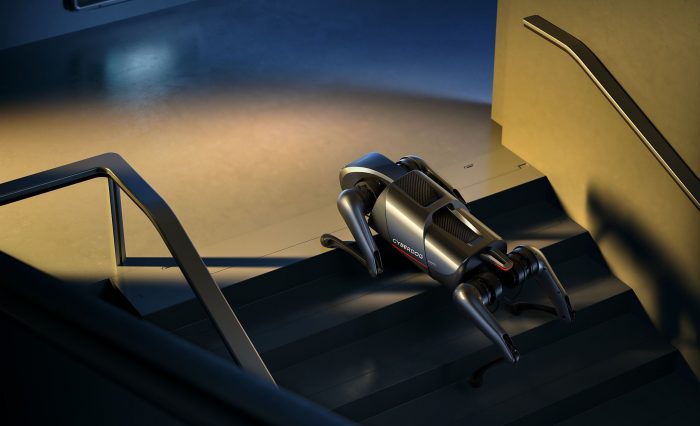 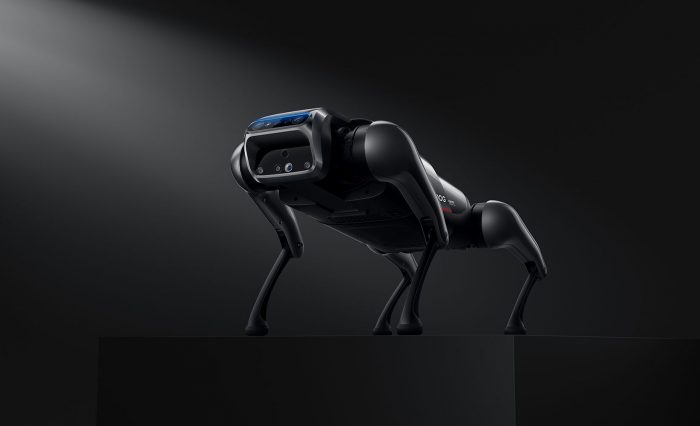 The advancement of robotics involves various frontier fields and is currently in a stage of global co-creation. Through open source, Xiaomi encourages developers from around the world to contribute to this field, communicate with each other, and progress together.

CyberDog itself is built upon open source algorithms, with Xiaomi reconstructing and optimizing in-house developed core modules. Today, Xiaomi is releasing 1,000 units of CyberDog at RMB 9,999 to Xiaomi Fans, engineers, and robotic enthusiasts to jointly explore the immense possibility of CyberDog. It will also set up the “Xiaomi Open Source Community” to constantly share progress and results with developers around the world, and promises to establish a robotics laboratory to provide a platform for engineers to continue the pursuit of future innovations. 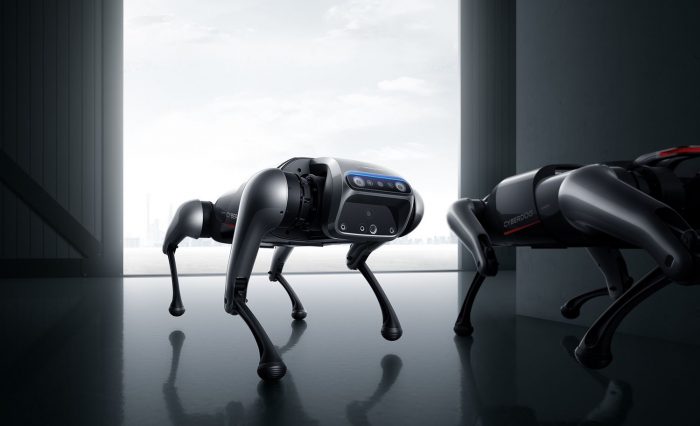 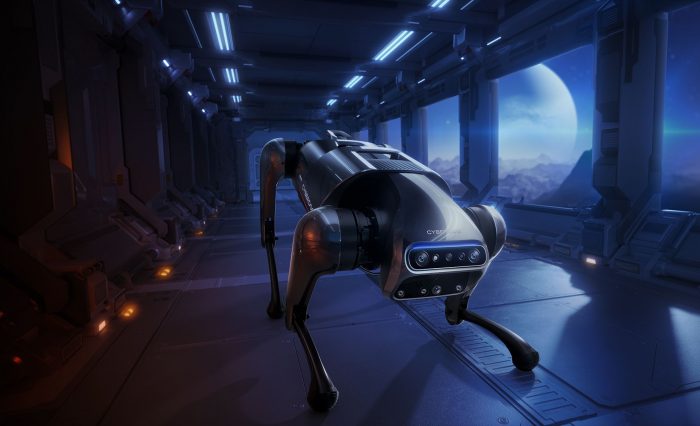 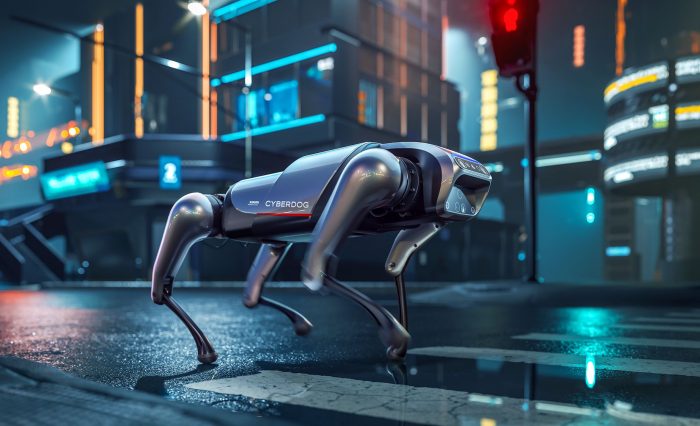