The VESA Certified AdaptiveSync Display logo is designed for gaming displays, focused on significantly higher refresh rates and low latency panel performance. The logo includes a value indicating the maximum video frame rate that is achievable for Adaptive-Sync operation when tested in factory default settings at native resolution. Values in the logo will include 144, 165, 240, 360, etc.

VESA will enable consumers to easily identify and compare the variable refresh rate performance of displays supporting Adaptive-Sync prior to purchase. Only displays that pass all Adaptive-Sync Display CTS and VESA DisplayPort™ compliance tests can qualify for the VESA Certified AdaptiveSync Display or MediaSync Display logos.

The VESA Certified MediaSync Display logo is designed for displays primarily focused on jitter-free media playback supporting all international broadcast video formats. There is no performance tier associated with this logo since the emphasis of product certification is on the absence of jitter and flicker rather than high frame rate. 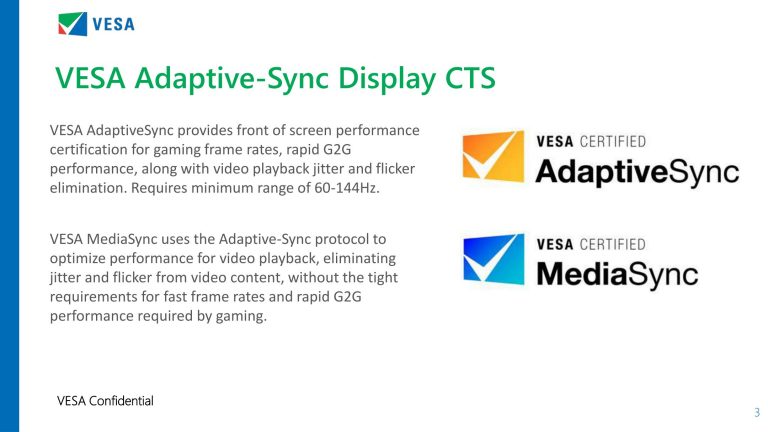 In 2014, VESA added Adaptive-Sync protocols to the VESA DisplayPort video interface standard to enable smoother, tear-free images for gaming and jitter-free video playback, as well as enable lower power and greater efficiency in displaying content rendered at a wide range of frame rates. Since this introduction, VESA’s Adaptive-Sync technology has seen widespread adoption across the display industry and is now supported by all major GPU chipset vendors. However, while many PC and laptop displays currently support Adaptive-Sync protocols, until now there had been no open standard in measuring the level of performance or quality of Adaptive-Sync support for any given display. VESA’s AdaptiveSync Display and MediaSync Display logo programs address this need, providing the consumer with a clear benchmark for front-of-screen visual performance of variable refresh rate operation established by testing in compliance with the Adaptive-Sync Display CTS.

According to Seok Ho Jang, Vice President in charge of IT Development Division at LG Electronics, “We believe that with VESA launching its Adaptive-Sync Display standard in the rapidly growing gaming market, we can expect to see even greater innovation in the gaming monitor categories. We are proud that the LG UltraGear™ brand will be involved from the very beginning with the acclaimed LG UltraGear™ 27GP950 and 27GP850 models, the first-ever monitors to receive VESA AdaptiveSync Display certification. LG also has new 2022 models on the way, which we believe will not only meet the high standards demanded by VESA’s performance tests, but are also well equipped to satisfy the expectations and diverse needs of today’s consumers.” 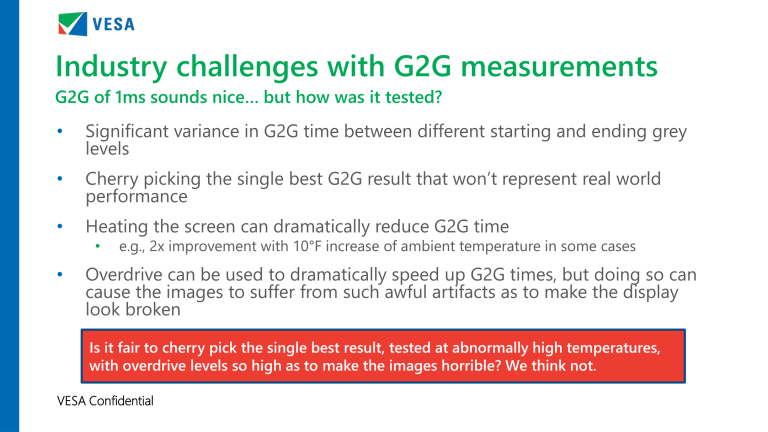 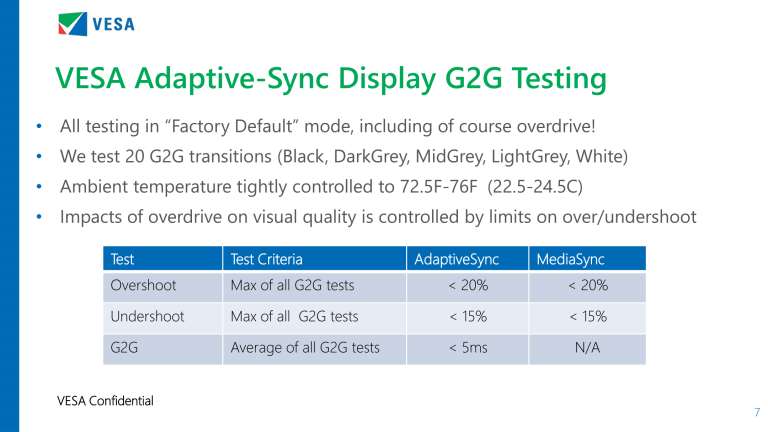 The VESA Adaptive-Sync Display CTS includes more than 50 automated display performance tests covering several key variables, including refresh rate, flicker, gray-to-gray response time (including limits on overshoot and undershoot to ensure high-quality images), video frame drop, and video frame rate jitter. As required by the VESA Adaptive-Sync Display CTS, all displays must be tested in the factory shipping state or default factory mode configuration, as well as tested in ambient room temperature, in order to ensure the display is evaluated and certified under realistic user conditions. In addition, all displays that meet the requirements for VESA AdaptiveSync Display and MediaSync Display logo certification must also be tested and certified to VESA’s DisplayPort standard. The majority of desktop and laptop GPUs introduced within the last two years are capable of supporting VESA’s Adaptive-Sync protocols. VESA encourages consumers to check with their GPU vendor to verify that their GPU and software driver enables Adaptive-Sync operations with VESA Certified AdaptiveSync Display and MediaSync Display products by default. 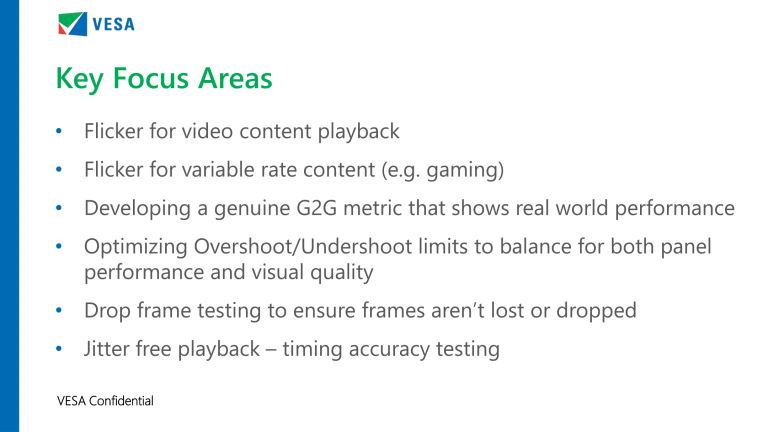 According to Roland Wooster, chairman of the VESA Display Performance Metrics Task Group responsible for the Adaptive-Sync Display CTS and the association’s representative from Intel Corporation for HDR and Adaptive Sync display technology, “The Adaptive-Sync Display CTS builds upon the foundation that VESA laid with the introduction of the Adaptive-Sync protocols eight years ago. It provides an open, industry-wide and brand-agnostic standard backed by a logo program that gives consumers a guarantee that the displays that they’re buying for gaming or for media playback will meet a clearly defined minimum set of front-of-screen performance criteria when used with a suitable GPU. In designing the test specification and logo program, VESA explicitly set a high bar on performance criteria and testing methodology with tighter criteria than many existing specs and logo programs. As with all of our standards, VESA will continue to develop and refine the Adaptive-Sync Display CTS to address new display developments and market needs in order to enable further improvements in visual quality and user-experience for consumers.”