Effort will infuse AI throughout UF’s curriculum and help address wide range of challenges across the state. 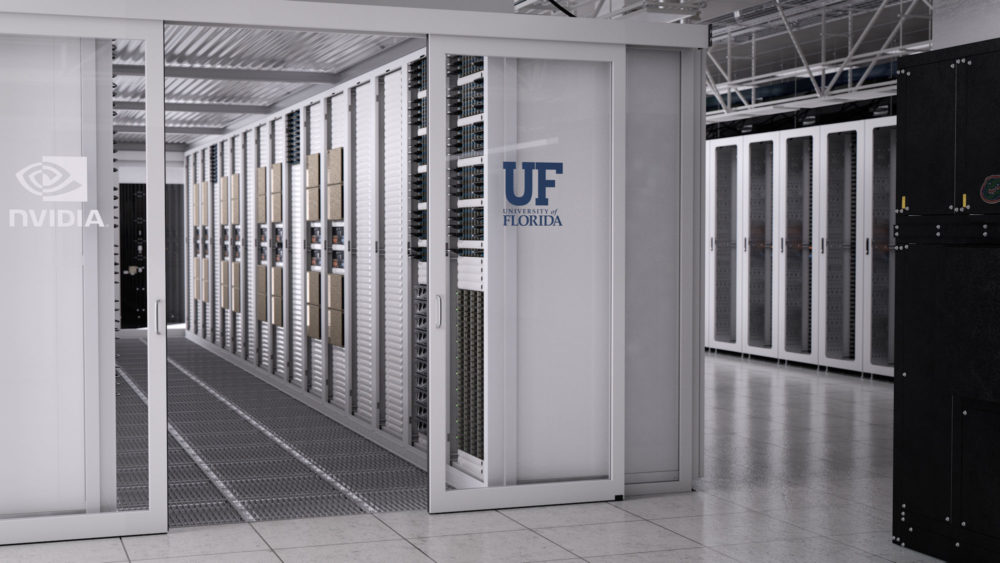 The University of Florida and NVIDIA Tuesday unveiled a plan to build the world’s fastest AI supercomputer in academia, delivering 700 petaflops of AI performance.

The effort is anchored by a $50 million gift: $25 million from alumnus and NVIDIA co-founder Chris Malachowsky and $25 million in hardware, software, training and services from NVIDIA.

“We’ve created a replicable, powerful model of public-private cooperation for everyone’s benefit,” said Malachowsky, who serves as an NVIDIA Fellow, in an online event featuring leaders from both the UF and NVIDIA.

UF will invest an additional $20 million to create an AI-centric supercomputing and data center.

The $70 million public-private partnership promises to make UF one of the leading AI universities in the country, advance academic research and help address some of the state’s most complex challenges.

“This is going to be a tremendous partnership,” Florida Gov. Ron DeSantis said. “As we look to keep our best talent in state, this will be a significant carrot, you’ll also see people around the country want to come to Florida.”

Working closely with NVIDIA, UF will boost the capabilities of its existing supercomputer, HiPerGator, with the recently announced NVIDIA DGX SuperPOD architecture. The system will be up and running by early 2021, just a few weeks after it’s delivered.

This gives faculty and students within and beyond UF the tools to apply AI across a multitude of areas to address major challenges such as rising seas, aging populations, data security, personalized medicine, urban transportation and food insecurity. UF expects to create 30,000 AI-enabled graduates by 2030.

“The partnership here with the UF, the state of Florida, and NVIDIA, anchored by Chris’ generous donation, goes beyond just money,” said NVIDIA CEO Jensen Huang, who founded NVIDIA in 1993 along with Malachowsky and Curtis Priem. “We are excited to contribute NVIDIA’s expertise to work together to make UF a national leader in AI and help address not only the region’s, but the nation’s challenges.”

UF, ranked seventh among public universities in the United States by US News & World Report and aims to break into the top five, offers an extraordinarily broad range of disciplines, Malachowsky said.

The region is also a “living laboratory for some of society’s biggest challenges,” Malachowsky said.

The effort aims to help define a research landscape to deal with the COVID-19, pandemic, which has seen supercomputers take a leading role.

“Our vision is to become the nation’s first AI university,” University of Florida President Kent Fuchs said. “I am so grateful again to Mr. Malachowsky and NVIDIA CEO Jensen Huang.

State and regional leaders already look to the university to bring its capabilities to bear on an array of regional and national issues.

Among them: supporting agriculture in a time of climate change, addressing the needs of an aging population, and managing the effects of rising sea levels in a state with more than 1,300 miles of coastline.

And to ensure no community is left behind, UF plans to promote wide accessibility to these computing capabilities.

As part of this, UF will:

Malachowsky has served in a number of leadership roles as NVIDIA has grown from a startup to the global leader in visual and parallel computing. A recognized authority on integrated-circuit design and methodology, he has authored close to 40 patents.

In addition to holding a BSEE from the University of Florida, he has an MSCS from Santa Clara University. He has been named a distinguished alumni of both universities, in addition to being inducted last year into the Florida Inventors Hall of Fame.

UF is the first institution of higher learning in the U.S. to receive NVIDIA DGX A100 systems. These systems are based on the modular architecture of the NVIDIA DGX SuperPOD, which enables the rapid deployment and scaling of massive AI infrastructure.

UF’s HiPerGator 3 supercomputer will integrate 140 NVIDIA DGX A100 systems powered by a combined 1,120 NVIDIA A100 Tensor Core GPUs. It will include 4 petabytes of high-performance storage. An NVIDIA Mellanox HDR 200Gb/s InfiniBand network will provide the high throughput and extremely low-latency network connectivity.

DGX A100 systems are built to make the most of these capabilities as a single software-defined platform. NVIDIA DGX systems are already used by eight of the ten top US national universities.

That platform includes the most advanced suite of AI application frameworks in the world. It’s a software suite that covers data analytics, AI training and inference acceleration, and recommendation systems. Its multi-modal capabilities combine sound, vision, speech and a contextual understanding of the world around us.

Together, these tools have already had a significant impact on healthcare, transportation, science, interactive appliances, the internet and other areas.

More Than Just a Machine

Friday’s announcement, however, goes beyond any single, if singular, machine.

NVIDIA will also contribute its AI expertise to UF through ongoing support and collaboration across the following initiatives:

Collectively, all of the data sciences-related activities and programs — and UF’s new supercomputer — will support the university’s broader AI-related aspirations.

To support that effort, the university has committed to fill 100 new faculty positions in AI and related fields, making it one of the top AI universities in the country.

That’s in addition to the 500 recently hired faculty across disciplines, many of whom will weave AI into their teaching and research.

“It’s been thrilling to watch all this,” Malachowsky said. “It provides a blueprint for how other states can work with their region’s resources to make similar investments that bring their residents the benefits of AI, while bolstering our nation’s competitiveness, capabilities, and expertise.”