We’re thrilled to announce the release of 3DMark Wild Life, a new cross-platform benchmark for comparing the graphics performance of the latest Apple, Android and Windows devices.

Wild Life offers two ways to test mobile devices: a quick benchmark that measures instant performance and a longer stress test that shows you how your device performs under longer periods of heavy load.

3DMark Wild Life is a new cross-platform benchmark for Apple, Android and Windows devices. You can use 3DMark Wild Life to test and compare the graphics performance of the latest smartphones, tablets and notebooks.

Run the 3DMark Wild Life benchmark to measure a device’s ability to provide instant performance for a short period of time. This test mirrors mobile games in which the gameplay loop is a series of short bursts of activity.

The 3DMark Wild Life Stress Test is a longer test that shows how a device performs under longer periods of heavy load. It mirrors mobile games in which the gameplay loop is a longer, more immersive experience. Instead of producing a single score, the main result from the stress test is a chart that shows you how the device’s performance changed during the test. This chart can help you understand how your device manages performance and heat during heavy use. 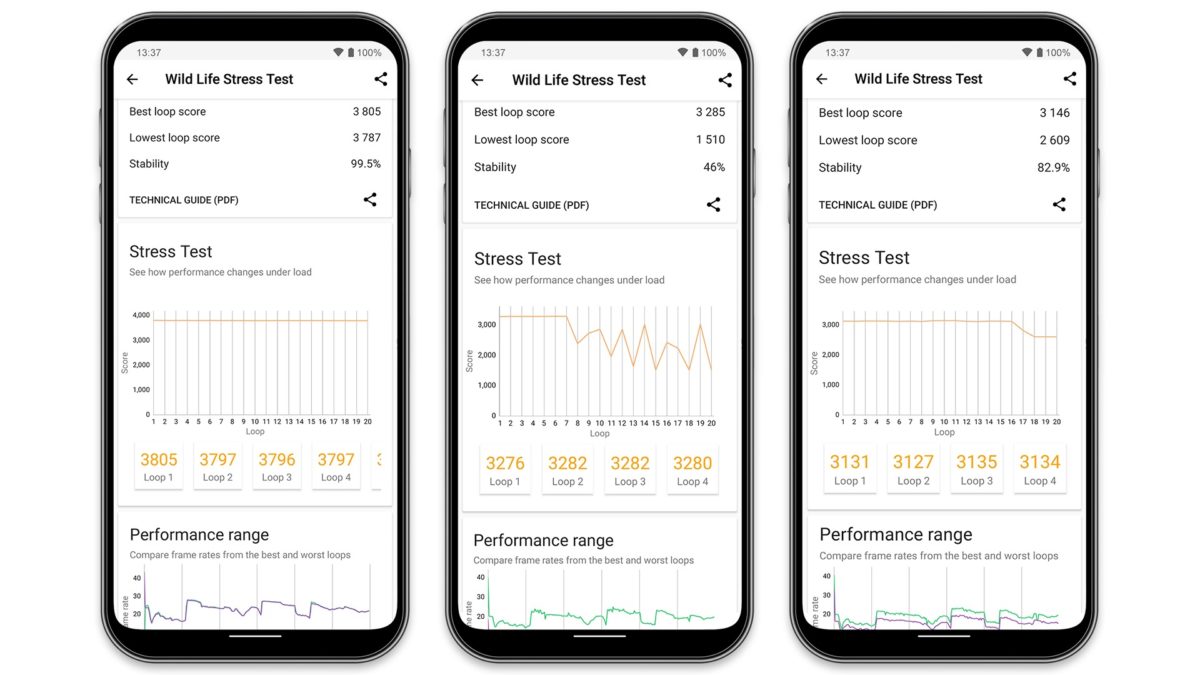 The benchmark that gives you more than a score

3DMark is a benchmarking app that gives you more than a score. With its unique charts, lists and rankings, 3DMark gives you unrivaled insights into the performance of Android and iOS devices.

Average benchmark scores are good for comparing devices, but 3DMark goes further. For each device, a unique chart shows you the full range of results submitted by other 3DMark users around the world.

In the chart below, for example, you can see that all the results tend to fall in the same narrow range. This means the device performs consistently even when the benchmark is running under less than ideal conditions.

The next chart, however, shows a different performance profile. There are four distinct peaks spread over a wide range of scores. A chart with this shape tells you that the device does not perform consistently in real-world use.

The rightmost peak shows the score the device can achieve under ideal conditions. The two middle peaks tell you that this device slows down when hot or when multitasking. Many devices tend to reduce performance in steps, and those steps are visible in the chart. The leftmost peak shows you that the device’s real-world performance can sometimes be far below the optimum.

With 3DMark, it’s also easy to see how major OS updates—like Android 11 and iOS 14—affect the performance of a device. All charts and rankings are updated daily as new benchmark results come in.

Wild Life is available now as a free update for the 3DMark Android app from Google Play. You need Android 10 or later to run the Wild Life benchmark.

3DMark Wild Life is available as a free, standalone app from the Apple App Store. Compatibility starts with the iPhone 6s and runs to the latest models. You need iOS 13 or later to run the benchmark.

Wild Life is available now as a free update for 3DMark Advanced Edition from Steam, the UL Benchmarks website and now from the Green Man Gaming store.

Wild Life is available as a free update for 3DMark Professional Edition customers with a valid annual license.