Leipzig, Germany July 15th 2021 – The availability of AMD’s current mobile processors from the Ryzen 5000 series has improved significantly over the past few weeks. The coming months continue to promise a reliable CPU supply. Consequently, XMG is not only able to finally offer the AMD-based models of the CORE and NEO laptops in significantly higher quantities, but also plans to introduce additional series with Ryzen processors, which recently had to be postponed several times due to limited CPU supply. After the global chip shortage recently caused laptop prices to rise during the second quarter in the wake of increasing purchase prices for electrical components and ICs, XMG expresses cautious optimism for the third quarter. The company expects purchase prices to stabilize at the current level. 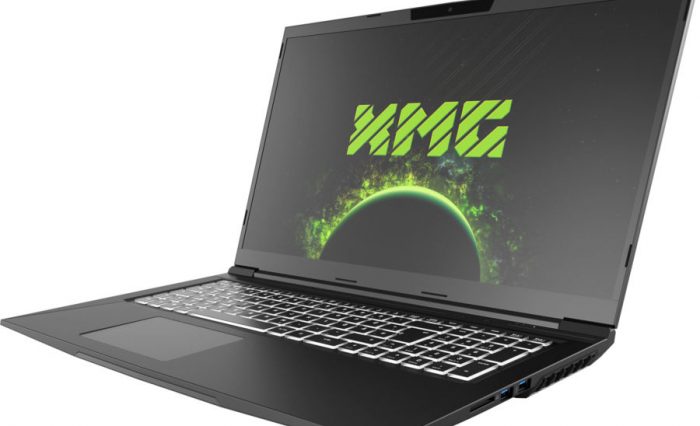 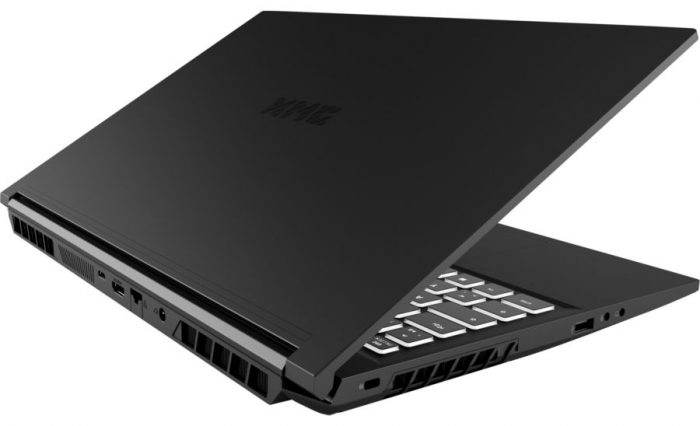 AMD Ryzen 5000 supply is getting better

We are seeing a lot of AMD Ryzen 5000 (Cezanne) supply coming in to our factory right now. We seem to be getting enough supply to fulfill all of the orders that we have planned for the majority of this year. This means: 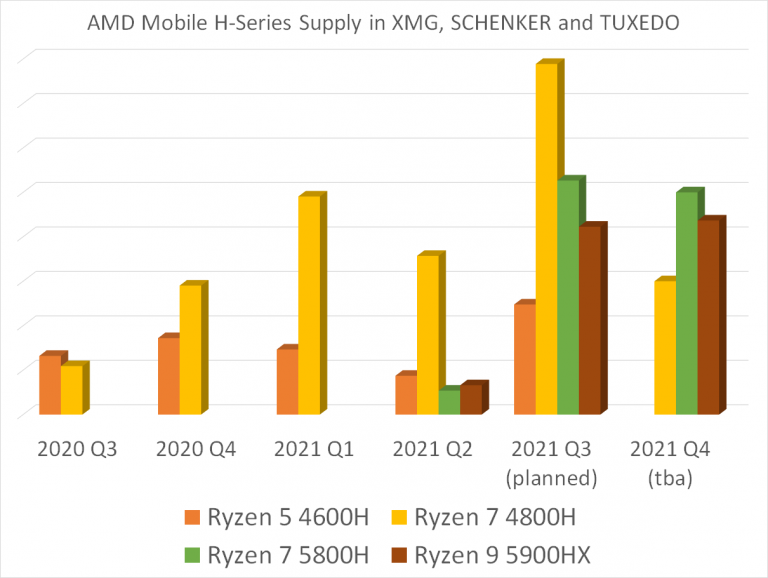 Intel and NVIDIA supply is stable

We have launched XMG CORE and NEO with Intel Core 11th Gen “H45” CPUs and we plan to launch XMG PRO soon after. Intel’s mobile CPUs are in good supply and we do not anticipate any supply bottlenecks in this area. XMG PRO’s launch delays are not due to the CPU but due to smaller components. The same is true for the fact that XMG FUSION 15 won’t see any 11th Gen upgrade likely until November this year.
On the GPU front, we see no supply bottlenecks in NVIDIA GPUs at the moment – at least not based on the quantities that we have forecasted for this year. Component prices have risen, especially VRAM has become much more expensive and in recent months – but it’s not holding us back on supply.

Supply on ICs from Realtek, Cypress and others

This years silicon shortage does not only affect the big players but is being seen on all fronts. Many electrical components and ICs (integrated circuits) have sharply risen in price since Q2 2021 and have had long lead times and low supply. The most price increases we have seen in LCD panels, DDR4 memory, GDDR6 video memory, chips and controllers for Audio, Card Readers, Network and Power Delivery. The following vendors are just two examples among many:

Realtek has been an iconic player for decades and is providing among many things the audio chips that drive our laptop speakers and headphone jacks. XMG CORE and NEO is using a relatively high end solution called ALC274 with Smart Amplifier. This enables the speakers to really utilize their 2W output and can drive them to good volume even without the help of additional equalizer software such as THX Spatial Audio and Creative Soundblaster.

Realtek’s solution have been in really tight supply recently and have delayed a lot of our shipments, including smaller models such das VIA 15 Pro (TUXEDO Pulse 15). We were facing the question whether or not we will need to switch to a lower-end audio solutions without the Smart Amplifier. However, we made the decision to stick to our guns, to not switch ICs and to not dilute our product. Although this has put us in a tight spot for a while, we anticipate that we should be able to get enough supply to fulfill our quantities for the rest of the year. If there are delays, so be it. We will not downgrade the quality of our product just for the sake of convenience.

Cypress for USB 4 and Thunderbolt 4

Cypress is making the USB-PD chips for the USB-C ports in XMG CORE and NEO. Even in laptops that cannot be charged over USB-C, the “PD” (power delivery) protocol is important to negotiate with USB-C peripherals and to be compliant with USB 4 and Thunderbolt. XMG CORE and NEO is using Cypress CYPD5225 and there is practically no alternative. While Cypress might not the only approved vendor on Intel’s list for Thunderbolt 4 (there is also Texas Instruments), differences in PCB layout and firmware support mandate that we are not able to just switch CYPD5225 against the competing model. It’s all or nothing.

There has been a scare recently of CYPD5225 becoming totally unavailable. Prices have risen, stocks have dried up. Over recent months were given bleak forecasts, saying that it would be unknown whether or not we will get any supply in Q3 and Q4 this year. Not having access to these chips would mean to totally scrap the Thunderbolt functionality on XMG CORE and NEO with Intel Core 11th Gen. In such circumstances, they would only remain USB-C with DisplayPort (same like on the AMD variant), but without the much sought-after USB4 and Thunderbolt features.

But similar to Realtek, we decided to hold on and cling to any supply of Cypress we could get our hands on. After long negotiations with our partners, we are now moderately confident that we should have enough supply to carry us through the rest of the year. Similar to the Realtek situation, we would rather wait for supply than to cut important features from our already-launched products.

This year has seen unprecedented price hikes in desktop graphics cards and other PC components. AMD desktop CPUs where in short supply as well but have now moved back to their MSRP. Desktop GPU prices are still way beyond their MSRP and it is not clear when they will fully normalize.

The price developments in the consumer retail markets for desktop components do not translate directly to pricing for laptop systems. Generally, the desktop retail market is more dynamic because of the flexibility of standardized components (any CPU works with any GPU etc.) and the influence of 2nd hand market for GPUs that have been scalped or that have expired their usefulness in crypto-mining.

The laptop market however is more rigid and follows more long-term trends. Once a laptop has been developed and launched, parts usually cannot be replaced anymore without changing the specs or the board layout. For example, the 1440p/165Hz screen in XMG CORE and NEO is only available from one single source with which our ODM has an exclusive long-term commitment. This is what enabled us to launch this spec in 2020 before anyone else (together with Eluktronics in the US).

It currently seems like component prices are stabilizing for our ODM partners. We expect prices to now have a certain long-term stability because once goods have been ordered and confirmed in the factory, the material will be collected and the prices are fixed. However, the prospect of having good supply for our most popular models in the 2nd half of 2021 will give us more flexibility when it comes to sales campaigns with our marketing partners – for example with the brands of our most popular SSD and RAM makers. To this end, it is strongly recommended that you subscribe to our newsletter to be informed of our upcoming sales campaigns.

Delivery times will go down

Delivery times on bestware have been pretty bleak over recent months with an indication of 3~4 weeks for most of the time. This was partially due to long order queues, tight product supply and the complexity of BTO production with such a high number of product variations. We have since hired new staff and streamlined our processes. This will allow us to soon lower the delivery estimate to 1~2 weeks for new orders over the next few weeks and then to hopefully lower it further in Q3.

Perspective on models without dedicated graphics

We have a number of models that do not have dedicated graphics, namely in SCHENKER VIA, VISION, WORK and MEDIA series.
We remain committed to serve the demand of professional users who require a strong CPU for multi-core rendering and content creation but who do want to pay extra for dedicated graphics. This includes software developers, professionals in science and medical fields an many others. Using socketed DDR4 memory (not soldered) also plays a big role in this commitment to enthusiasts and professionals.