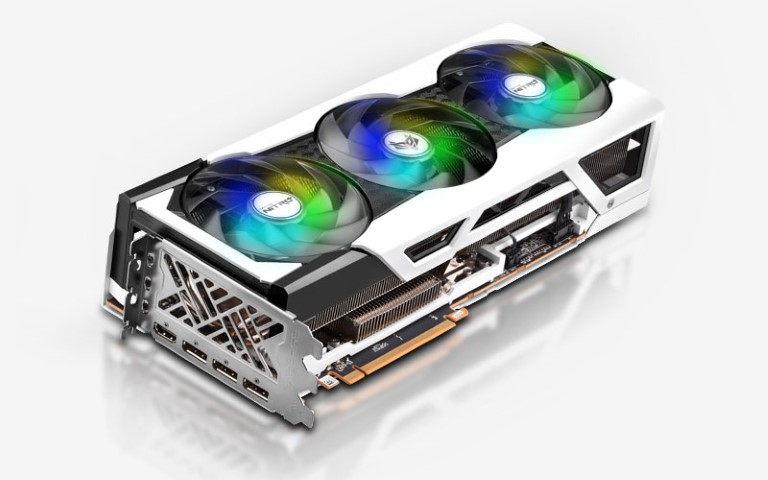 The NITRO+ AMD Radeon™ RX 6950 XT PURE Graphics Card is equipped with up to 4 output ports including 1x HDMI 2.1 VRR and FRL and 3x Display Port 1.4 with DSC outputs to support the latest display monitors on the market. To support raytracing in games, it comes set with 80 Ray Accelerators.

An Abundance of New Features

The NITRO+ AMD Radeon™ RX 6950 XT PURE Graphics Card cooling system comprises of the notable Tri-X Cooling Technology working simultaneously with the Wave Fin Design to reduce friction and wind which cuts noise, and the V Shape Fin Design for GPU Cooling to accelerate and centralize airflow around the GPU to dissipate heat efficiently. The newly added die-casted Frontplate Heatsink overlays the entire PCB to cool the VRM, Memory and Chokes resulting in superior heat dissipation for top-notch airflow and cooling performance. The GPU is mounted onto the High TG Copper PCB – a high-density 14 layer 2oz Copper PCB with a high TG [Glass Transition] temperature value PCB to match the power requirements of the GPU and memory and guarantee mechanical stability of the PCB during operation.

The NITRO+ AMD Radeon™ RX 6950 XT PURE Graphics Card is fitted with SAPPHIRE’s latest fan innovation – the Angular Velocity Fan Blade Design. It provides a double layer of downward air pressure which alongside the air pressure on the outer ring of the Axial fan, results in up to 44% more downward air pressure and up to 19% more airflow for a quieter and cooler operation when compared to the previous generation fan blades. 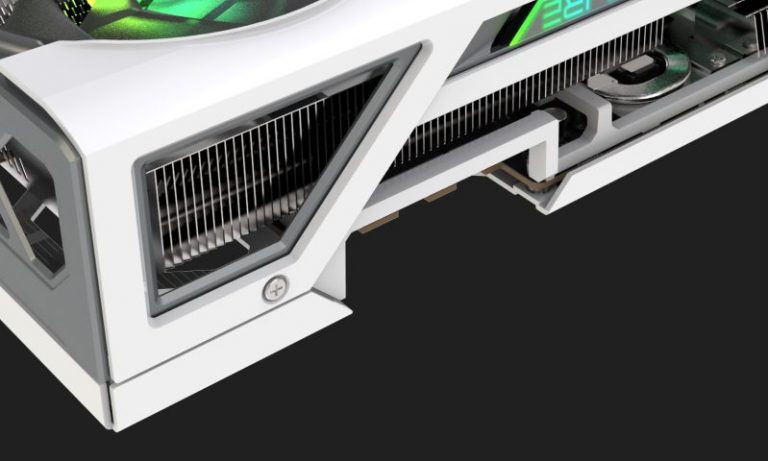 For increased durability and to accentuate the sleek sporty white aesthetic, the NITRO+ AMD Radeon™ RX 6950 XT PURE is constructed with a Die Casted Aluminum-Magnesium Alloy Frame. To help strengthen the structural stiffness of the shroud to make it strong and scratch resistant, this special frame envelopes the sides of the PCB to create a high quality finish that elevates the aesthetic and strength of the graphics card. The aluminum-magnesium alloy metal and high temperature resistant polycarbonate materials work in tandem to achieve the balance between structural strength, weight, style and quality of finish. The high quality aluminum Metal Backplate with Thermal Pad protects the components on the backside of the PCB and helps dissipate heat from the PCB with a high performance thermal pad in between.

The TOXIC AMD Radeon™ RX 6950 XT Limited Edition Graphics Card boasts an incredible OC BIOS Boost Clock of up to 2565 MHz and a Game Clock of up to 2343 MHz. This OC BIOS is set to the maximum TGP setting for a brilliant boost in performance, especially paired with the 18 Gbps Effective Memory Clock and 5120 Stream Processors. The liquid cooled design is engineered with an Asetek AIO Cooler with a powerful 360mm radiator enabling up to 425W TBP whilst staying cool under 60°C and quiet under 30dBA. The Die Casted Aluminum-Magnesium Alloy Frame alongside the Metal Backplate with Thermal Pad ensures the structural integrity of the entire card for a strong, high quality, and icy cool product. The High TG Copper PCB establishes the power requirements of the GPU and memory, and guarantees the PCB’s mechanical stability.

The NITRO+ AMD Radeon™ RX 6950 XT Graphics Card is developed with two default clock settings at an 18 Gbps Effective Memory Clock; a Boost Clock of up to 2324 MHz and a Game Clock of up to 2116 MHz. The High TG Copper PCB works simultaneously with the V Shape Fin Design for GPU Cooling and Wave Fin Design to keep the PCB mechanically stable during operation and generate airflow to dissipate heat at a low noise level. The Hybrid Fan Blade Design combines the traditional axial fan and blower fan to generate a strong downward air pressure quietly to carry heat away from the GPU. These are ARGB Dual Ball Bearing Fans to ensure a longer and quieter lifespan, and can be illuminated using the SAPPHIRE TriXX Software or the ARGB Bypass Connector to suit every gamer’s personal battlestation style.