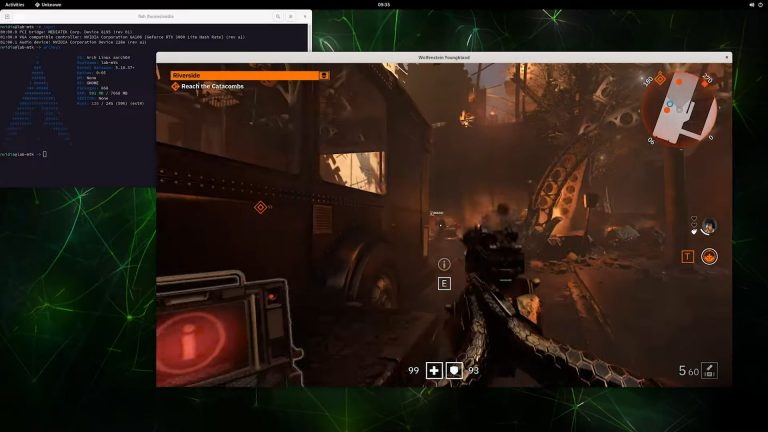 A pair of new demos running GeForce RTX technologies on the Arm platform unveiled by NVIDIA today show how advanced graphics can be extended to a broader, more power-efficient set of devices.

The two demos, shown at this week’s Game Developers Conference, included Wolfenstein: Youngblood from Bethesda Softworks and MachineGames, as well as The Bistro from the Open Research Content Archive running in real time on a MediaTek Arm platform with ray-traced graphics.

RTX has redefined the industry. We’re now investing in new platforms where we can deploy advanced graphics so gamers have more choice. The performance and energy efficiency of ARM CPUs with NVIDIA technologies can open an entirely new class of PCs.

“RTX is the most groundbreaking technology to come to PC gaming in the last two decades,” said PC Tseng, general manager of MediaTek’s Intelligent Multimedia Business Unit.“MediaTek and NVIDIA are laying the foundation for a new category of Arm-based high-performance PCs.”

RTX on Arm in Action

NVIDIA also showed how RTX can enhance the The Bistro demo, which portrays a detailed, ray-traced urban scene in France, while running on an Arm-based system.

Both were demonstrated on an NVIDIA GeForce RTX 3060 GPU paired with a MediaTek Kompanio 1200 Arm processor. Wolfenstein: Youngblood uses the idTech game engine made by id Software, while The Bistro uses NVIDIA’s sample framework.

The demos are made possible by NVIDIA extending support for its software development kits for implementing five key NVIDIA RTX technologies to Arm and Linux.

The Potential for RTX on ARM

GeForce RTX technologies — including GPU-accelerated ray tracing, NVIDIA DLSS and other AI-powered innovations — have made a significant impact on real-time graphics since their introduction in 2018.

The RTXDI, NRD and RTXMU SDKs for Arm with Linux and Chromium are available now. RTXGI and DLSS will be coming soon. For more information, contact NVIDIA’s developer relations team or visit www.https://developer.nvidia.com.