SANTA CLARA, Calif., May 26, 2021 — NVIDIA (NASDAQ: NVDA) today reported record revenue for the first quarter ended May 2, 2021, of $5.66 billion, up 84 percent from a year earlier and up 13 percent from the previous quarter, with record revenue from the company’s Gaming, Data Center and Professional Visualization platforms. 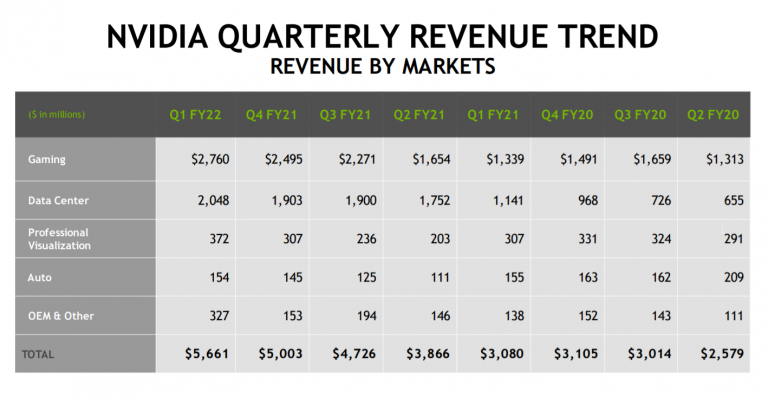 “We had a fantastic quarter, with strong demand for our products driving record revenue,” said Jensen Huang, founder and CEO of NVIDIA.

“Our Data Center business continues to expand, as the world’s industries take up NVIDIA AI to process computer vision, conversational AI, natural language understanding and recommender systems. NVIDIA RTX has reinvented computer graphics and is driving upgrades across the gaming and design markets. Our partners are launching the largest-ever wave of NVIDIA-powered laptops. Across industries, the adoption of NVIDIA computing platforms is accelerating.

“Mellanox, one year in, has exceeded our expectations and transformed NVIDIA into a data-center-scale computing company. We continue to make headway with our planned acquisition of Arm, which will accelerate innovation and growth for the Arm ecosystem. From gaming, cloud computing, AI, robotics, self-driving cars, to genomics and computational biology, NVIDIA continues to do impactful work to invent a better future,” he said.

On May 21, 2021, the company’s board of directors declared a four-for-one split of NVIDIA’s common stock payable in the form of a stock dividend, with the additional shares expected to be distributed on July 19, 2021. The stock dividend is conditioned on obtaining stockholder approval at the company’s 2021 Annual Meeting of Stockholders on June 3, 2021, to increase the number of authorized shares of common stock from 2 billion to 4 billion.

NVIDIA’s outlook for the second quarter of fiscal 2022 is as follows:

NVIDIA achieved progress since its previous earnings announcement in these areas: