NVIDIA announces A100 80GB accelerator and DGX Station A100 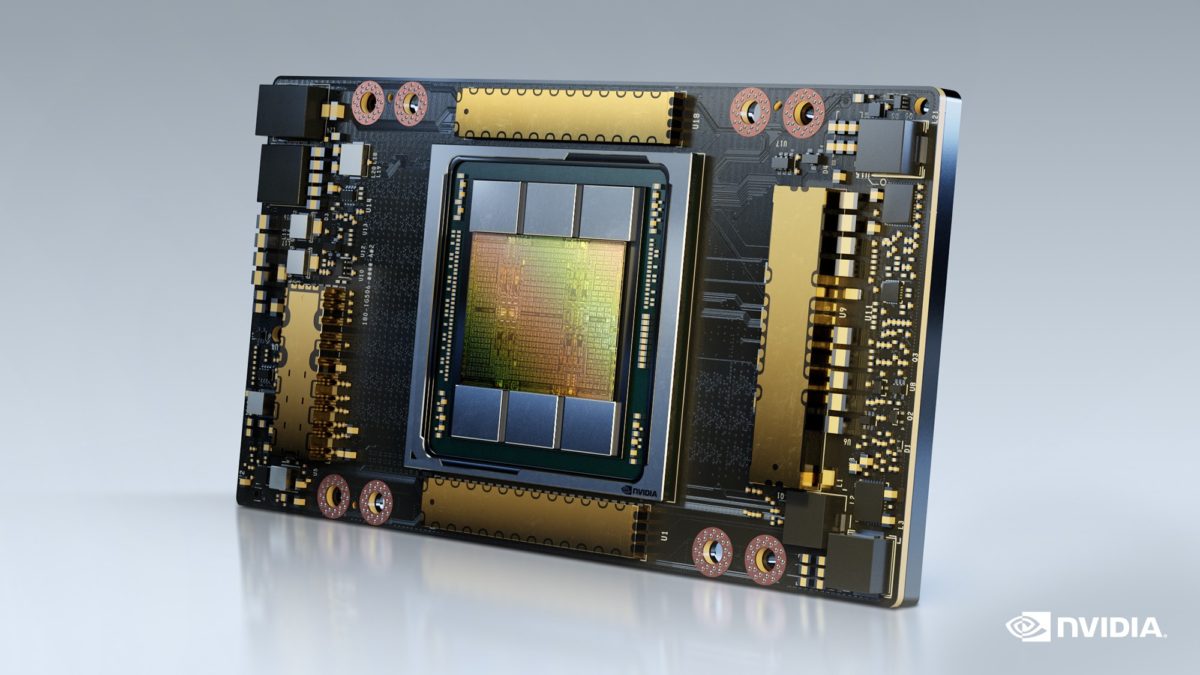 SC20—NVIDIA today unveiled the NVIDIA® A100 80GB GPU — the latest innovation powering the NVIDIA HGX™ AI supercomputing platform — with twice the memory of its predecessor, providing researchers and engineers unprecedented speed and performance to unlock the next wave of AI and scientific breakthroughs.

The new A100 with HBM2e technology doubles the A100 40GB GPU’s high-bandwidth memory to 80GB and delivers over 2 terabytes per second of memory bandwidth. This allows data to be fed quickly to A100, the world’s fastest data center GPU, enabling researchers to accelerate their applications even faster and take on even larger models and datasets.

“Achieving state-of-the-art results in HPC and AI research requires building the biggest models, but these demand more memory capacity and bandwidth than ever before,” said Bryan Catanzaro, vice president of applied deep learning research at NVIDIA. “The A100 80GB GPU provides double the memory of its predecessor, which was introduced just six months ago, and breaks the 2TB per second barrier, enabling researchers to tackle the world’s most important scientific and big data challenges.”

The NVIDIA A100 80GB GPU is available in NVIDIA DGX™ A100 and NVIDIA DGX Station™ A100 systems, also announced today and expected to ship this quarter.

Fueling Data-Hungry Workloads
Building on the diverse capabilities of the A100 40GB, the 80GB version is ideal for a wide range of applications with enormous data memory requirements.

For AI training, recommender system models like DLRM have massive tables representing billions of users and billions of products. A100 80GB delivers up to a 3x speedup, so businesses can quickly retrain these models to deliver highly accurate recommendations.

The A100 80GB also enables training of the largest models with more parameters fitting within a single HGX-powered server such as GPT-2, a natural language processing model with superhuman generative text capability. This eliminates the need for data or model parallel architectures that can be time consuming to implement and slow to run across multiple nodes.

With its multi-instance GPU (MIG) technology, A100 can be partitioned into up to seven GPU instances, each with 10GB of memory. This provides secure hardware isolation and maximizes GPU utilization for a variety of smaller workloads. For AI inferencing of automatic speech recognition models like RNN-T, a single A100 80GB MIG instance can service much larger batch sizes, delivering 1.25x higher inference throughput in production.

On a big data analytics benchmark for retail in the terabyte-size range, the A100 80GB boosts performance up to 2x, making it an ideal platform for delivering rapid insights on the largest of datasets. Businesses can make key decisions in real time as data is updated dynamically.

For scientific applications, such as weather forecasting and quantum chemistry, the A100 80GB can deliver massive acceleration. Quantum Espresso, a materials simulation, achieved throughput gains of nearly 2x with a single node of A100 80GB.

“Speedy and ample memory bandwidth and capacity are vital to realizing high performance in supercomputing applications,” said Satoshi Matsuoka, director at RIKEN Center for Computational Science. “The NVIDIA A100 with 80GB of HBM2e GPU memory, providing the world’s fastest 2TB per second of bandwidth, will help deliver a big boost in application performance.”

Key Features of A100 80GB
The A100 80GB includes the many groundbreaking features of the NVIDIA Ampere architecture:

World’s Only Petascale Integrated AI Workgroup Server, Second-Gen DGX Station Packs Four NVIDIA A100 GPUs, Debuts with up to 320GB of GPU Memory to Bring AI into Offices and Labs 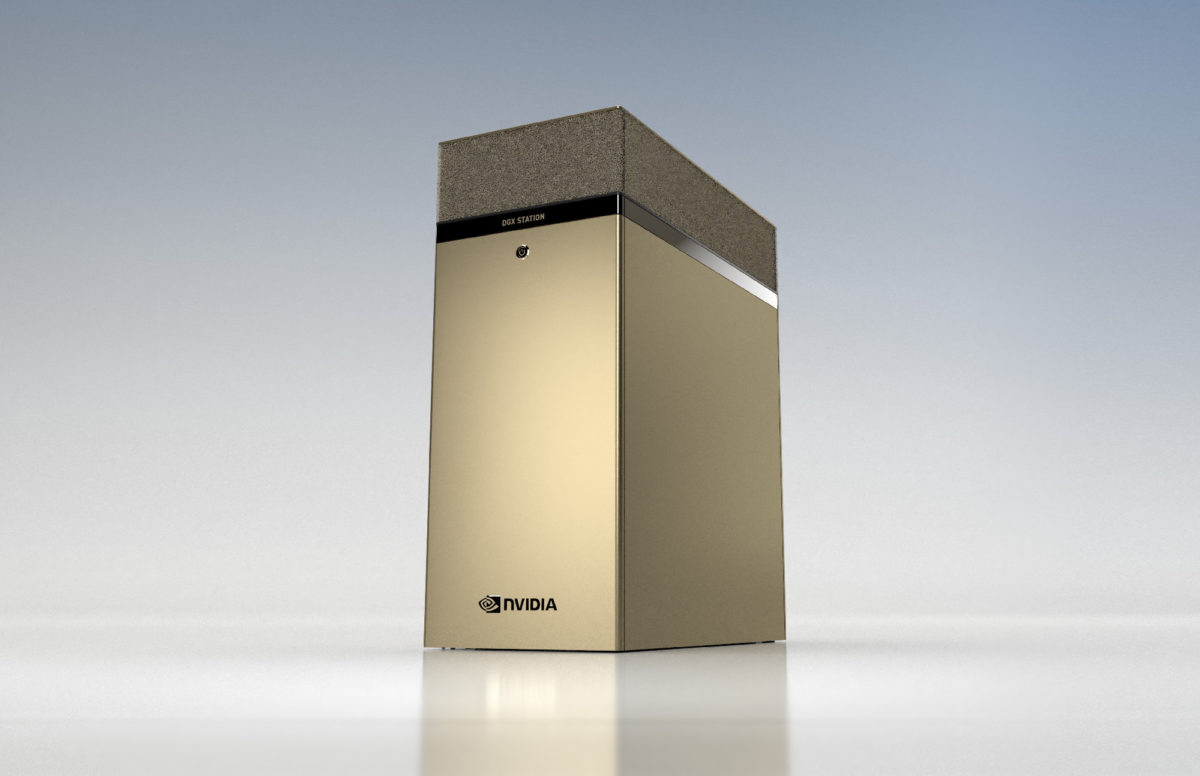 Delivering 2.5 petaflops of AI performance, DGX Station A100 is the only workgroup server with four of the latest NVIDIA® A100 Tensor Core GPUs fully interconnected with NVIDIA NVLink®, providing up to 320GB of GPU memory to speed breakthroughs in enterprise data science and AI.

DGX Station A100 is also the only workgroup server that supports NVIDIA’s multi-instance GPU (MIG) technology. With MIG, a single DGX Station A100 provides up to 28 separate GPU instances to run parallel jobs and support multiple users without impacting system performance.

“DGX Station A100 brings AI out of the data center with a server-class system that can plug in anywhere,” said Charlie Boyle, vice president and general manager of DGX systems at NVIDIA. “Teams of data science and AI researchers can accelerate their work using the same software stack as NVIDIA DGX A100 systems, enabling them to easily scale from development to deployment.”

DGX Station Powers AI Innovation
Organizations around the world have adopted DGX Station to power AI and data science across industries such as education, financial services, government, healthcare and retail. These AI leaders include:

An AI Supercomputer Anywhere
While DGX Station A100 does not require data-center-grade power or cooling, it is a server-class system that features the same remote management capabilities as NVIDIA DGX A100 data center systems. System administrators can easily perform any management tasks over a remote connection when data scientists and researchers are working at home or in labs.

DGX Station A100 is available with four 80GB or 40GB NVIDIA A100 Tensor Core GPUs, providing options for data science and AI research teams to select a system according to their unique workloads and budgets.

Doubling Down on GPU Memory for AI, HPC
For advanced data center workloads, DGX A100 systems will be available with the new NVIDIA A100 80GB GPUs, doubling GPU memory capacity to 640GB per system to enable AI teams to boost accuracy with larger datasets and models.

The new NVIDIA DGX A100 640GB systems can also be integrated into the NVIDIA DGX SuperPOD™ Solution for Enterprise, allowing organizations to build, train and deploy massive AI models on turnkey AI supercomputersll available in units of 20 DGX A100 systems.

The first installments of NVIDIA DGX SuperPOD systems with DGX A100 640GB will include the Cambridge-1 supercomputer being installed in the U.K. to supercharge healthcare research, as well as the new University of Florida HiPerGator AI supercomputer that will power AI-infused discovery across the Sunshine State.