As MSI official announcement mentioned, all of MSI 500 series motherboards with 11th Gen Intel Core processors support PCIe 4.0, and all of Z590 Wi-Fi motherboards have at least one 2.5G LAN and the latest Wi-Fi 6E solution which extends to 6GHz spectrum providing remarkble user experience when streaming, gaming and even working from home.

For the connectivity, the entire MSI Z590 motherboards adopts Lightning USB 20G, known as USB 3.2 Gen2x2, capable of providing transfer speeds up to 20Gbps via Type-C port. Onboard Thunderbolt 4 ports that the bandwidth speed is up to true 40Gbps are exclusive to MEG Series, supporting six daisy-chained devices. Maximum 8K display support and USB 4.0 specification are a great benefit to creators.

As the brand new appearances of MSI motherboards are revealed in public, most want to delve into specifications and performance. MSI 500 Series has been comprehensively upgraded compared to the last generation, and they are worth it. Before we can take a look at the actual motherboards, here are details for everyone who are interested in.

The Emperor in the Realm – MEG

Combining powerful specifications and aesthetic designs, MSI MEG Series is the fantastic fine art that all hardcore users would like to collect. Which comes on the stage first is MEG Z590 ACE, which has classic black appearances decorated with gentle gold. 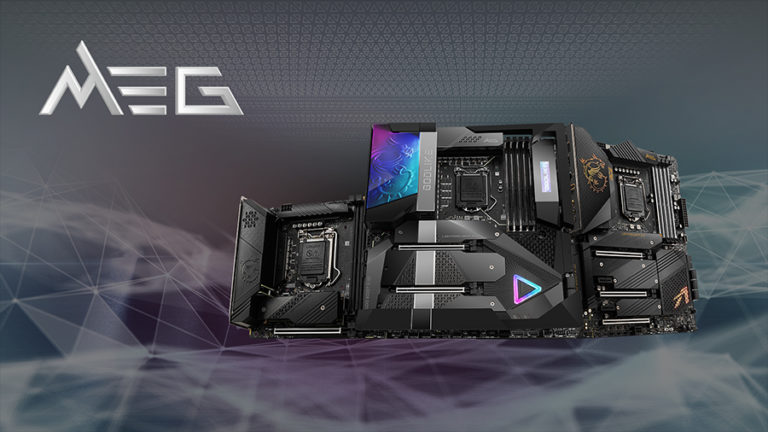 The following show the details of design. In addition to Aluminum Cover, MEG Z590 ACE has VRM heatsink, heat pipe and thermal pad to lower the temperature around CPU, and all of four M.2 slots are covered with M.2 Shield Frozr. On the top of PCB, Dedicated Choke Pad covers MOSFETs as well as chokes. More outstandingly, MSI upgrades Chest Plate of MEG Z490 ACE into Aluminum Backplate. The cover range is enlarged including most parts of back to effectively dissipate the heat. After running internal tests, the temperatures of front and back PCB of MEG Z590 ACE can drop 21% and 15.8% respectively, and MEG Z590 GODLIKE drops 27% on the front and 16% at the back, which proves that MSI heat dissipation solutions work well.*1 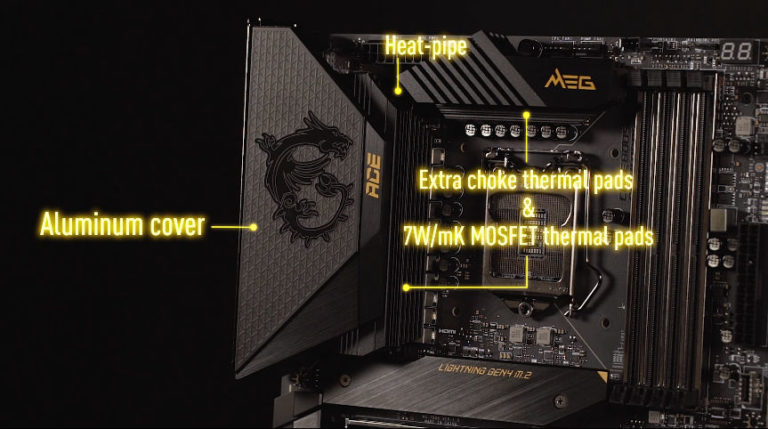 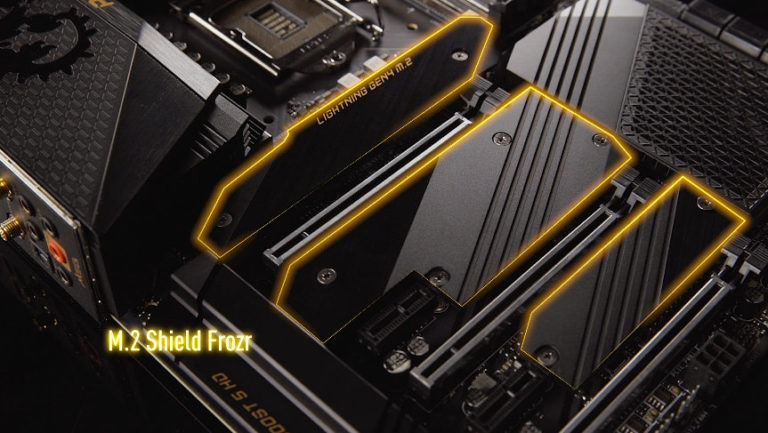 Refer to specifications, all of MEG series have the latest Wi-Fi 6E, and MEG ATX motherboards have four M.2 slots and dual 8 pins. Also, Thunderbolt 4 and Audio Boost 5 HD are exclusive to MEG Series.

As for MEG Z590 GODLIKE, MEG Z590 UNIFY and MEG Z590I UNIFY, they will be expected to hit the market in the coming days.

The Game Changer in the world – MPG

While MPG Series shows up, the trendy appearances catch gamers’ eye. MSI takes a long shot at MPG Series, such as wavelike VRM heatsink design and volume bar M.2 Shield Frozr design, which offer stylish impression. MPG Z590 GAMING FORCE is even the first violet black motherboard in the world. Especially, there are easter eggs hidden in the volume bar design. Can you find them? 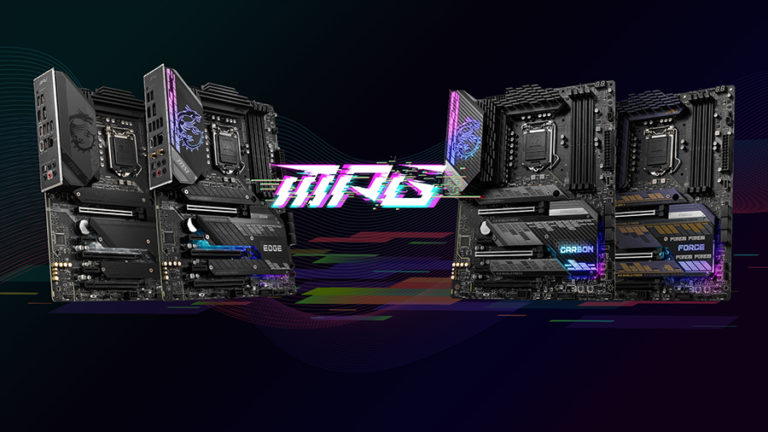 MPG Z590 GAMING CARBON WIFI and MPG Z590 GAMING FORCE are the first batch to show up on the market. Both have 16 Duet Rail Power System with 75A SPS that offers incredible gaming experience. Besides, MSI MPG ATX motherboards have three M.2 slots with M.2 Shield Frozr and Lightning USB 20G. Owning MSI MPG Series will definitely make you stand out.

The Sniper in this Fight – MAG 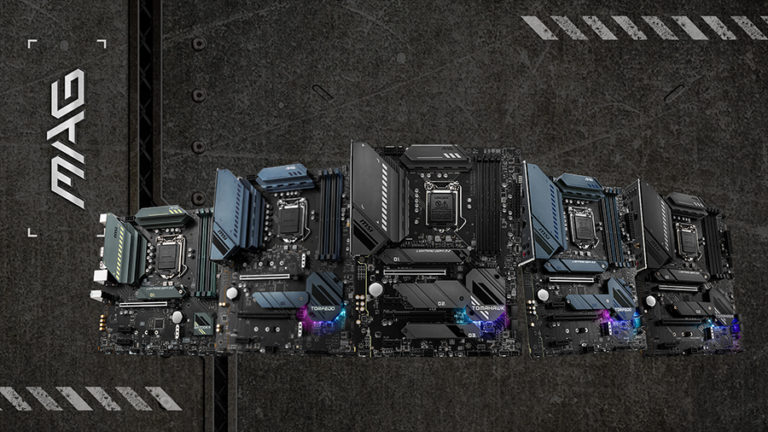 The Talent in Business – PRO

The matte black appearances with linear designs of MSI Z590 PRO motherboards are matches with your offices or rooms, and they are never out of fashion. MSI PRO Series motherboards are designed for everyone to use in business and daily use. Z590-A PRO and Z590 PRO WIFI have 12 Duet Rail Power System with DrMOS; to dissipate heat, both have Extended Heatsink Design as well as Frozr AI Cooling, a smart temperature control system. The temperatures of the front and back PCB are able to decrease by 18% and 26%.*1 Also, it is impressive that Z590 PRO WIFI is equipped with the latest Wi-Fi 6E solution in case users will need it in the near future. 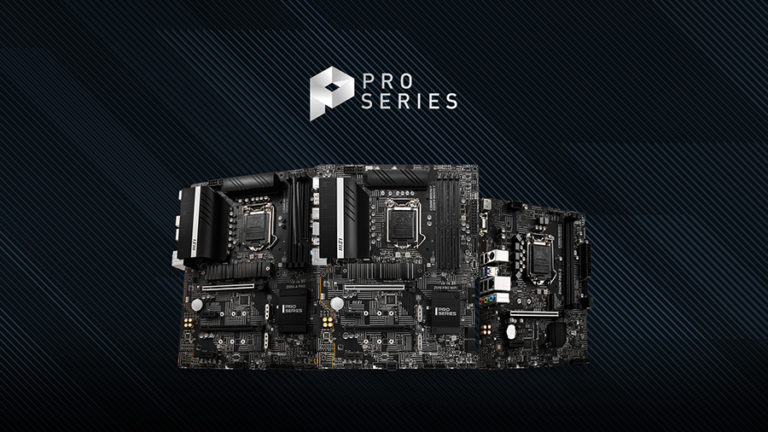