Both chips borrow the advanced technology from MediaTek’s powerful flagship Dimensity 9000 platform and package it into the new Dimensity 8000 series which is built on the ultra-efficient TSMC 5nm production process with an octa-core CPU.

The new Dimensity 8000 series also uses MediaTek’s Open Resource Architecture to give device makers the flexibility to customize and differentiate features so they can make 5G smartphones and 5G experiences that truly stand out.

Powered by a five gigapixel per second image signal processor (ISP), the Dimensity 8000 series produces the fastest, clearest HDR photos and video in its class. 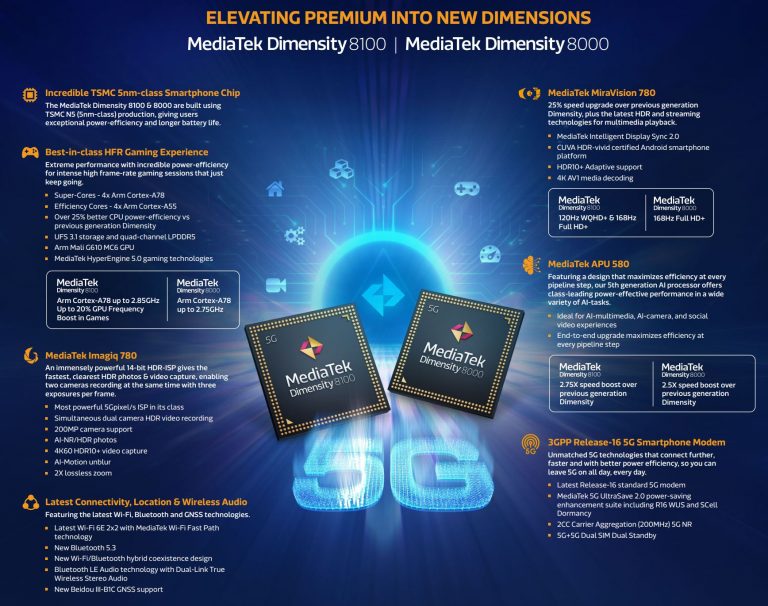 The features of the Dimensity 8000 series chips also include:

MediaTek also added the 6nm Dimensity 1300 to its 5G family. The Dimensity 1300’s HDR-ISP supports up to 200MP, and integrates MediaTek’s HyperEngine 5.0 to offer an optimal balance between performance and power for better efficiency in gaming and daily use scenarios. It comes with new AI enhancements, improving night shot photography and HDR capabilities for great image clarity. 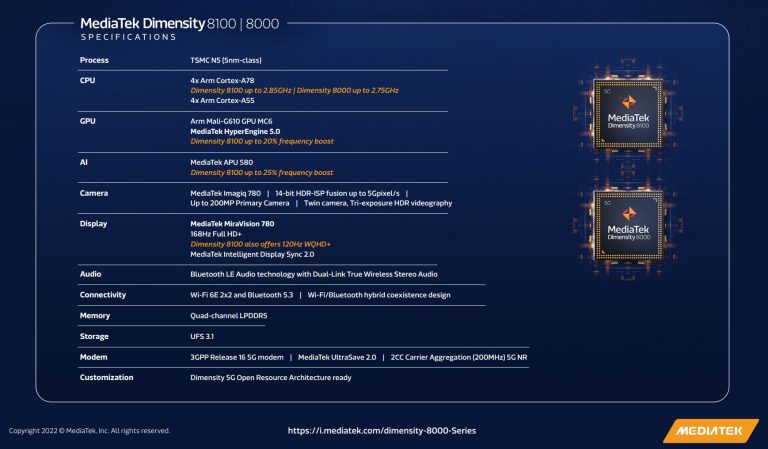 The Dimensity 1300 integrates an octa-core CPU with an ultra-core Arm Cortex-A78 clocked up to 3GHz, three Arm Cortex-A78 super cores and four Arm Cortex-A55 efficiency cores, along with an Arm Mali-G77 GPU and MediaTek APU 3.0 to support the latest AI capabilities.

Smartphones powered by the Dimensity 8100, Dimensity 8000 and Dimensity 1300 will be available in the market in the first quarter of 2022, powering a new era of incredible 5G devices by some of the world’s biggest smartphone brands.