Jon Peddie Research reports the growth of the global PC-based Graphics Processor Units (GPU) market reached 101 million units in Q4’21 and PC CPUs shipments decreased by -21% year over year. Overall GPUs will have a compound annual growth rate of 4.5% during 2020–2025 and reach an installed base of 3,331 million units at the end of the forecast period. Over the next five years, the penetration of discrete GPUs (dGPU) in the PC will grow to reach a level of 42%. 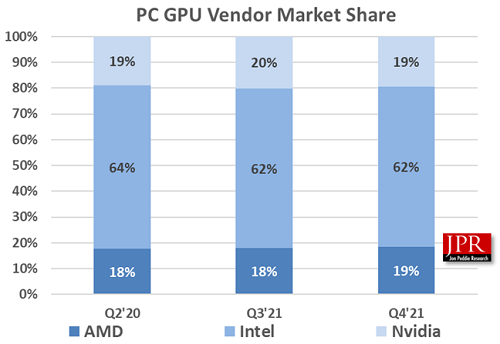 The fourth quarter is typically flat to up, compared to the previous quarter. This quarter was up 0.8% from last quarter, which is below the 10-year average of 1.6%.

GPUs are traditionally a leading indicator of the market because a GPU goes into a system before the suppliers ship the PC. AMD and Nvidia are guiding up for the next quarter, and Intel is down for an average of -0.38%. Last quarter, they guided down -1.53%, which was too low.

In a year like no other, suppliers reported shortages of component parts, capacitors, substrates, and other items. Even companies with a diverse portfolio were forced to allocate to the various segments they served. No one was happy about it, and, unfortunately, the upcoming inventory build-out for the holiday season that usually takes place in the third quarter will be constrained until the supply chain catches up with demand.

Jon Peddie, President of JPR, noted, “The disruptions in the supply chain caused by COVID and aggravated by Intel’s manufacturing difficulties have made forecasting unusually challenging. In this reporting period of late February, the world is facing turmoil in Ukraine, and continuing mutations of the virus, compounded by a disturbed workforce and new norms of work location. The forecast for the rest of the year is confusion and surprise.”