According to a new research report from the analyst firm Jon Peddie Research, unit shipments of add-in boards increased in Q2’21 from last year, while Nvidia increased market share to 80% from last quarter a 0.3% increase as well as 2% year-over-year. Over $11.8 billion AIBs shipped in the quarter—an increase of 179% year-over-year. 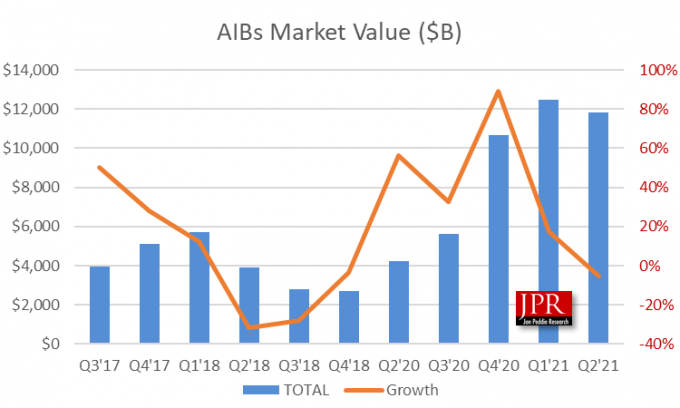 Add-in boards (AIBs) use discrete GPUs (dGPU) with dedicated memory. Desktop PCs, workstations, servers, rendering and mining farms, and scientific instruments use AIBs. Consumers and enterprises buy AIBs from resellers or OEMs. They can be part of a new system or installed as an upgrade to an existing system. Systems with AIBs represent the higher end of the graphics industry. Entry-level systems use integrated GPUs (iGPU) in CPUs that share slower system memory.

The trend of quarterly AIB sales had been steady to trending slightly down since the crypto madness of the last few years has waned. However, due to the pandemic and the rise in popularity of esports, AMD and Nvidia have been reporting record game segment revenues.

Considering these trends and the addition of Intel into the AIB market we see positive signs overall for the industry.

Both AMD and Nvidia enjoyed an increase in Desktop dGPU shipments year-over-year, and slight decreases from Q1, which could be seen as normal seasonality.

The relative changes from quarter-to-quarter are illustrated in the following chart. 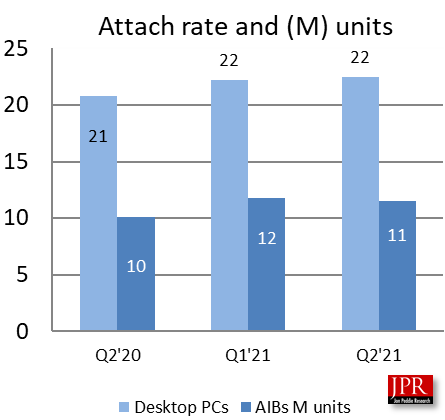 On a year-to-year basis, we found total AIB shipments during the quarter rose 13.4%, that is greater than desktop CPUs, which rose 8.0% from the same quarter a year ago.

The AIB market reached $29 billion last year. We forecast it to be $44.1 billion by 2023. Intel’s entry into the market could, due to the strength of their brand and position with OEMs, create an increase the unit shipments and TAM Since 1981, 2,094 million AIBs have been shipped.

Jon Peddie Research’s AIB Report is available now available and sells for $2,750. The annual subscription price for JPR’s AIB Report is $5,500 and includes four quarterly issues, and four hours of consulting. Subscribers to JPR’s TechWatch are eligible for a 10% discount. Bundle packages are also available. For information about purchasing the AIB Report, please call 415/435-9368 or visit the Jon Peddie Research website at www.jonpeddie.com.