JPR: GPU market is slowing down, shipments decreased by -19% year-to-year

Jon Peddie Research reports that the global PC-based graphics processor units (GPU) market reached 96 million units in Q1’22 and PC GPUs shipments decreased 6.2% due to disturbances in China, Ukraine, and the pullback from the lockdown elsewhere. However, the fundamentals of the GPU and PC market are solid over the long term, JPR predicts GPUs will have a compound annual growth rate of 6.3% during 2022–2026 and reach an installed base of 3.3 million units at the end of the forecast period. Over the next five years, the penetration of discrete GPUs (dGPU) in the PC market will grow to reach a level of 46%. 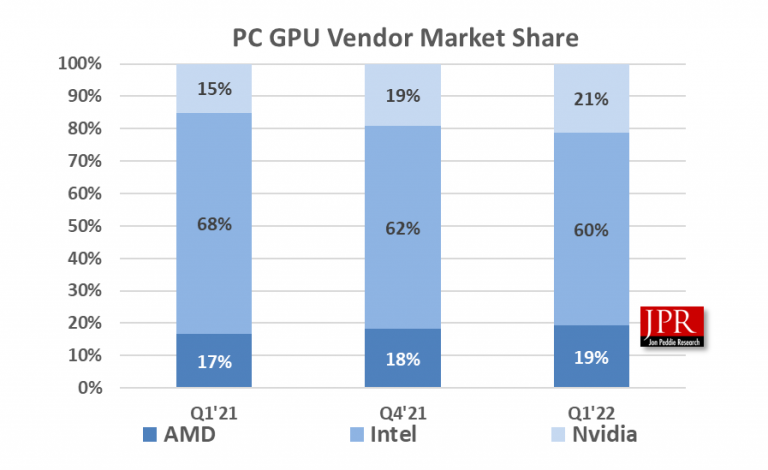 The first quarter is typically flat to down compared to the previous quarter. This quarter was down -6.2% from last quarter, which is above the 10-year average of -10.2%. GPUs are traditionally a leading indicator of the market because a GPU goes into a system before the suppliers ship the PC. Most of the semiconductor vendors are guiding up for the next quarter, an average of 1.99%. Last quarter they guided -0.4%, which was too high.

The swirl of influences at play includes macro disruptions in Europe and North America as COVID comes and goes along with shifting lockdown strategies. The return to work from COVID and return to offices is also a bit of a rolling disruption, and every country negotiates a shift that seems to be pleasing nobody. China has taken its own path to dealing with COVID, which continues to affect the availability of goods and components. And now, there is war. Russia’s attack on Ukraine is multiplying the effects of COVID, especially inflation and food insecurity.

Jon Peddie, president of JPR, noted, “Consumers are cautious despite new product introductions from AMD, Intel, and Nvidia (AIN) in the second half. Therefore, our forecast for the year is a modest 2% to 3% for GPUs.