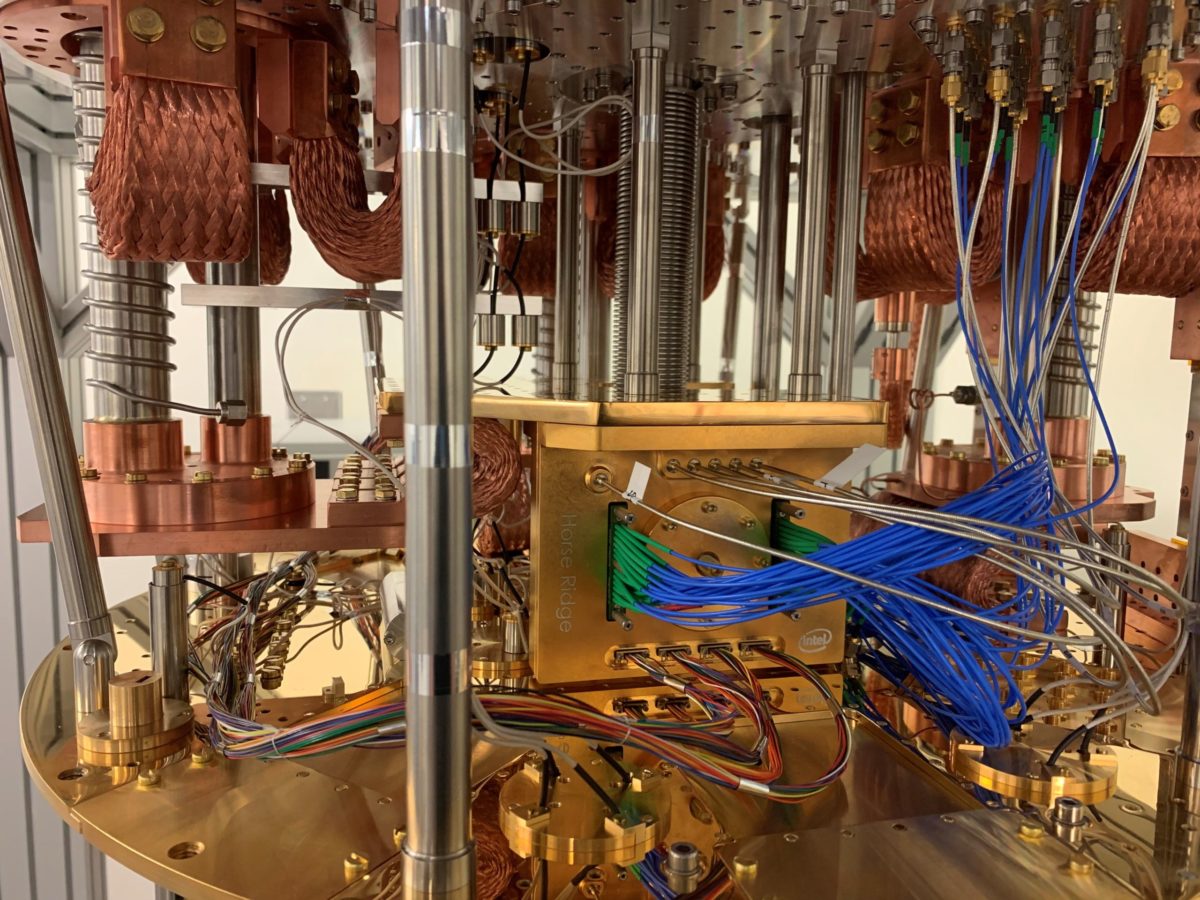 Building on innovations in the first-generation Horse Ridge controller introduced in 2019, Horse Ridge II supports enhanced capabilities and higher levels of integration for elegant control of the quantum system. New features include the ability to manipulate and read qubit states and control the potential of several gates required to entangle multiple qubits.

“With Horse Ridge II, Intel continues to lead innovation in the field of quantum cryogenic controls, drawing from our deep interdisciplinary expertise bench across the Integrated Circuit design, Labs and Technology Development teams. We believe that increasing the number of qubits without addressing the resulting wiring complexities is akin to owning a sports car, but constantly being stuck in traffic. Horse Ridge II further streamlines quantum circuit controls, and we expect this progress to deliver increased fidelity and decreased power output, bringing us one step closer toward the development of a ‘traffic-free’ integrated quantum circuit.”
–Jim Clarke, Intel director of Quantum Hardware, Components Research Group, Intel

Why It Matters: Today’s early quantum systems use room-temperature electronics with many coaxial cables that are routed to the qubit chip inside a dilution refrigerator. This approach does not scale to a large number of qubits due to form factor, cost, power consumption and thermal load to the fridge. With the original Horse Ridge, Intel took the first step toward addressing this challenge by radically simplifying the need for multiple racks of equipment and thousands of wires running into and out of the refrigerator in order to operate the quantum machine. Intel replaced these bulky instruments with a highly integrated system-on-chip (SoC) that simplifies system design and uses sophisticated signal processing techniques to accelerate setup time, improve qubit performance and enable the engineering team to efficiently scale the quantum system to larger qubit counts.

About the New Features: Horse Ridge II builds on the first-generation SoC’s ability to generate radio frequency pulses to manipulate the state of the qubit, known as qubit drive. It introduces two additional control features, paving the way for further integration of external electronic controls into the SoC operating inside the cryogenic refrigerator. 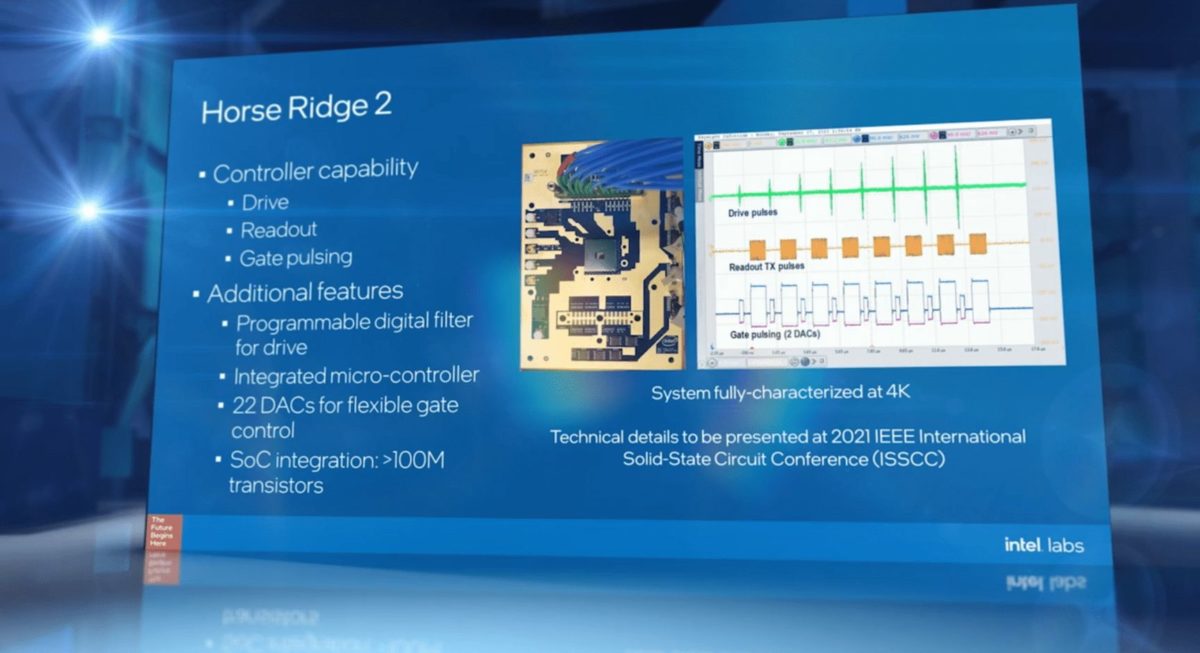 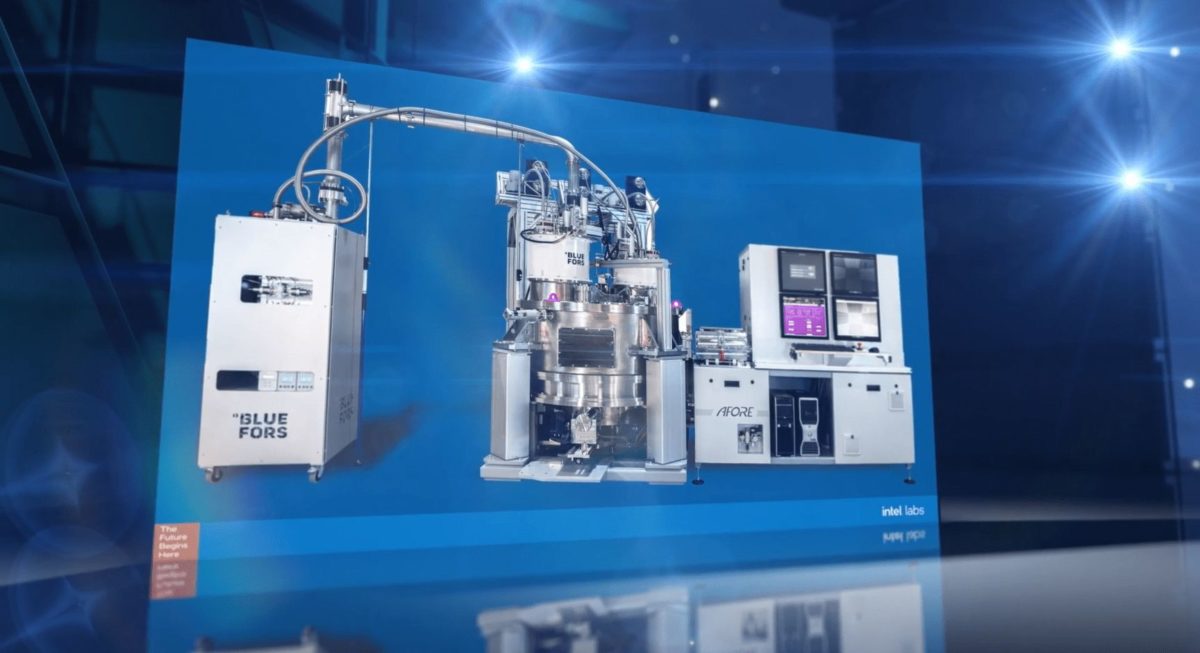 Qubit readout: The function grants the ability to read the current qubit state. The readout is significant, as it allows for on-chip, low-latency qubit state detection without storing large amounts of data, thus saving memory and power.
Multigate pulsing: The ability to simultaneously control the potential of many qubit gates is fundamental for effective qubit readouts and the entanglement and operation of multiple qubits, paving the path toward a more scalable system.
The addition of a programmable microcontroller operating within the integrated circuit enables Horse Ridge II to deliver higher levels of flexibility and sophisticated controls in how the three control functions are executed. The microcontroller uses digital signal processing techniques to perform additional filtering on pulses, helping to reduce crosstalk between qubits.

Horse Ridge II is implemented using Intel® 22nm low-power FinFET technology (22FFL) and its functionality has been verified at 4 kelvins. Today, a quantum computer operates in the millikelvin range – just a fraction of a degree above absolute zero. But silicon spin qubits – the underpinning of Intel’s quantum efforts – have properties that could allow them to operate at temperatures of 1 kelvin or higher, which would significantly reduce the challenges of refrigerating the quantum system.

Intel’s cryogenic control research focuses on achieving the same operational temperature level for both the controls and silicon spin qubits. Ongoing advances in this area, as demonstrated in Horse Ridge II, represent progress over today’s brute force approaches to scaling quantum interconnects and are a critical element of the company’s longer-term quantum practicality vision.