SANTA CLARA, Calif., March 15, 2022 – Intel today announced the first phase of its plans to invest as much as 80 billion euros in the European Union over the next decade along the entire semiconductor value chain – from research and development (R&D) to manufacturing to state-of-the art packaging technologies. Today’s announcement includes plans to invest an initial 17 billion euros into a leading-edge semiconductor fab mega-site in Germany, to create a new R&D and design hub in France, and to invest in R&D, manufacturing and foundry services in Ireland, Italy, Poland and Spain. With this landmark investment, Intel plans to bring its most advanced technology to Europe, creating a next-generation European chip ecosystem and addressing the need for a more balanced and resilient supply chain. 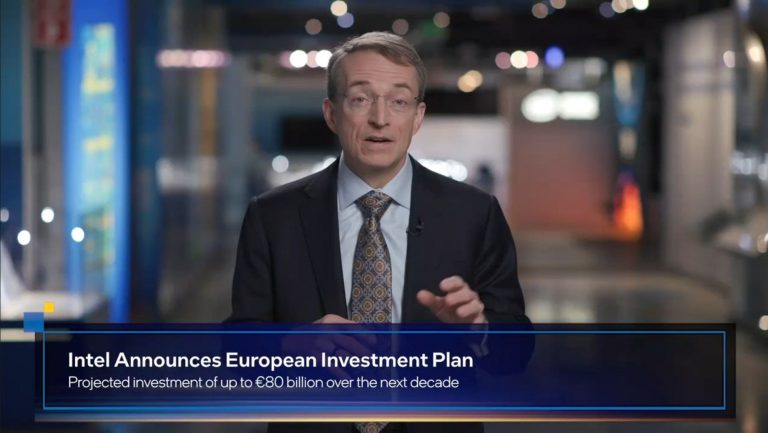 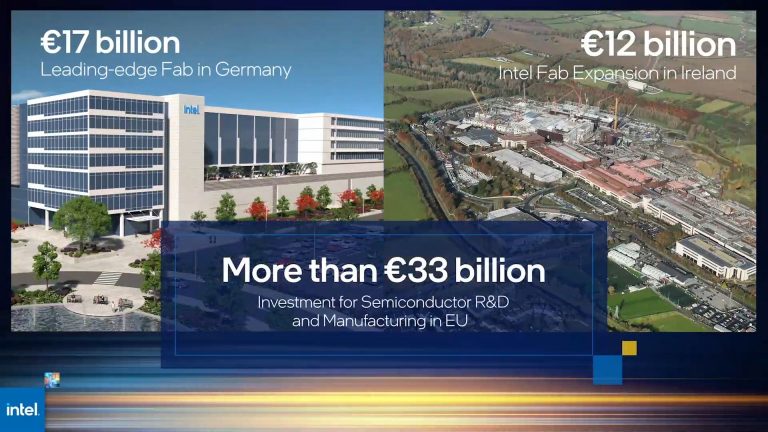 Pat Gelsinger, CEO of Intel, said: “Our planned investments are a major step both for Intel and for Europe. The EU Chips Act will empower private companies and governments to work together to drastically advance Europe’s position in the semiconductor sector. This broad initiative will boost Europe’s R&D innovation and bring leading-edge manufacturing to the region for the benefit of our customers and partners around the world. We are committed to playing an essential role in shaping Europe’s digital future for decades to come.”

Expanding Leading-Edge Manufacturing Capacities for ‘Made in Europe’ Chips

The investment program is centered around balancing the global semiconductor supply chain with a major expansion of Intel’s production capacities in Europe. In the initial phase, Intel plans to develop two first-of-their-kind semiconductor fabs in Magdeburg, Germany, the capital of Saxony-Anhalt. Planning will start immediately, with construction expected to begin in the first half of 2023 and production planned to come online in 2027, pending European Commission approval. The new fabs are expected to deliver chips using Intel’s most advanced, Angstrom-era transistor technologies, serving the needs of both foundry customers and Intel for Europe and globally as part of the company’s IDM (integrated device manufacturer) 2.0 strategy.

At the center of Europe and with top talent, superb infrastructure and an existing ecosystem of suppliers and customers, Germany is an ideal place to establish a new hub – a “Silicon Junction” – for advanced chipmaking. Intel plans to initially invest 17 billion euros, creating 7,000 construction jobs over the course of the build, 3,000 permanent high-tech jobs at Intel, and tens of thousands of additional jobs across suppliers and partners. Intel plans to refer to the new site as the Silicon Junction, connecting technology. This Silicon Junction will serve as the connection point for other centers of innovation and manufacturing across the country and region.

Intel is also continuing to invest in its Leixlip, Ireland, expansion project, spending an additional 12 billion euros and doubling the manufacturing space to bring Intel 4 process technology to Europe and expand foundry services. Once complete, this expansion will bring Intel’s total investment in Ireland to more than 30 billion euros. 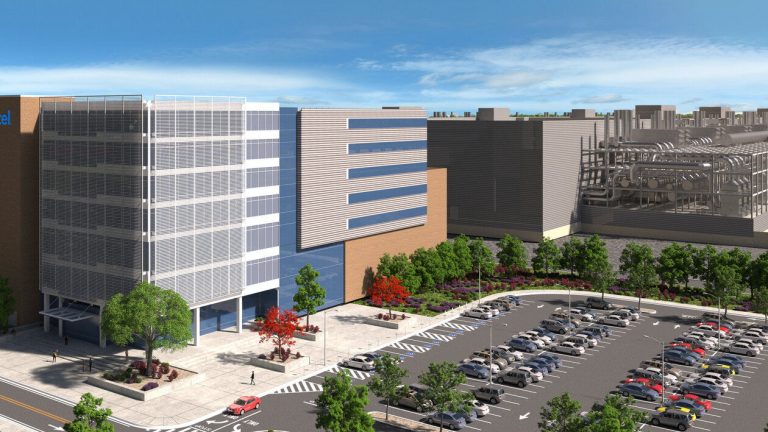 In addition, Intel and Italy have entered into negotiations to enable a state-of-the-art back-end manufacturing facility. With a potential investment of up to 4.5 billion euros, this factory would create approximately 1,500 Intel jobs plus an additional 3,500 jobs across suppliers and partners, with operations to start between 2025 and 2027. Intel and Italy aim to make this facility a first of its kind in the EU with new and innovative technologies. This would be in addition to the foundry innovation and growth opportunities Intel expects to pursue in Italy based on its planned acquisition of Tower Semiconductor. Tower has a significant partnership with STMicroelectronics, which has a fab in Agrate Brianza, Italy.

In total, Intel plans to spend more than 33 billion euros on these manufacturing investments. By significantly increasing its manufacturing capacities across the EU, Intel would lay the groundwork to bring various parts of the semiconductor value chain closer together and increase supply chain resiliency in Europe. 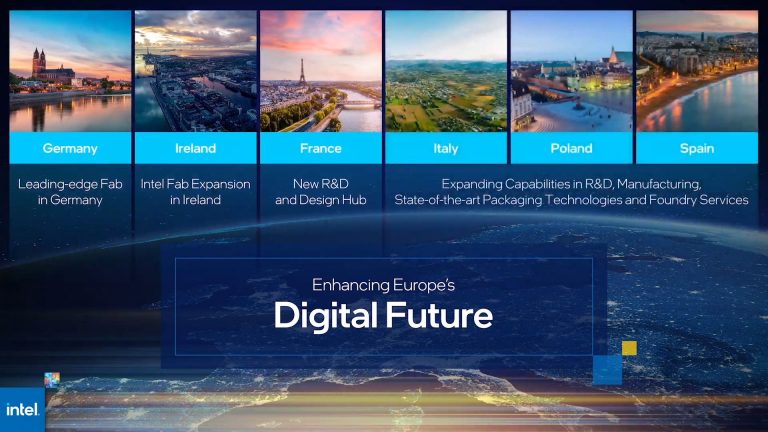 R&D and design are critical to advance leading-edge semiconductor manufacturing. Europe is home to world-class universities, research institutes, and leading chip designers and suppliers. Supporting this innovation cluster with additional investments in R&D and linking them to Intel’s leading-edge manufacturing plans will boost the circle of innovation in Europe, including providing small and medium enterprises (SMEs) better access to cutting-edge technologies.

In Gdansk, Poland, Intel is increasing its lab space by 50% with a focus on developing solutions in the fields of deep neural networks, audio, graphics, data center and cloud computing. The expansion is expected to be completed in 2023.

These investments will further strengthen Intel’s long-standing relationships with European research institutes across the continent, including IMEC in Belgium, Technical University Delft in the Netherlands, CEA-Leti in France and the Fraunhofer Institutes in Germany. Intel is also developing exciting partnerships in Italy with Leonardo, INFN and CINECA to explore advanced new solutions in HPC, memory, software programming models, security and cloud. 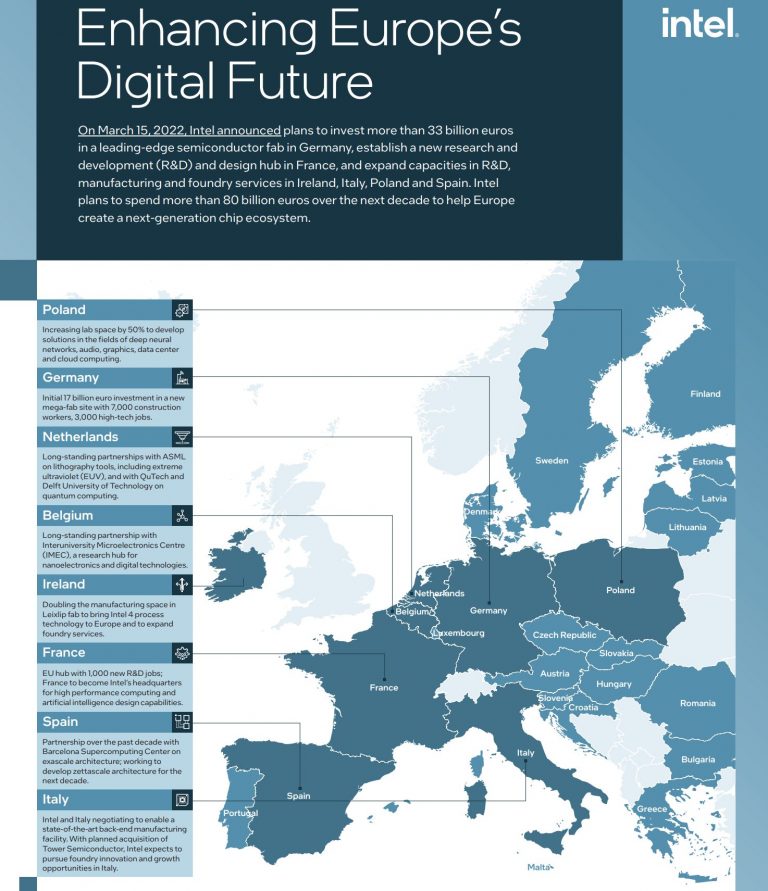 Positive Spillover Effects across the EU

Intel’s ambitious European investment plans will have positive effects across industries and member states. Building up manufacturing capacities and R&D capabilities at this scale will create a virtuous cycle of innovation

Intel has been present in Europe for more than 30 years and currently employs around 10,000 people throughout the EU. In the past two years, Intel has spent more than 10 billion euros with European suppliers. As Intel works to rebalance silicon supply globally, that spend is expected to nearly double by 2026.

Intel’s investment plans will accelerate leading-edge chip design capabilities, boost the European material and equipment supplier industry, and serve the strong customer base across industries in Europe. Additionally, the investments would be a magnet for thousands of additional engineers and technical workers, growing the pool of innovators, entrepreneurs and visionaries that will advance Europe’s digital and green future.

A state-of-the-art European semiconductor ecosystem will support the green transition and help deliver the European Green Deal. More efficient chips can reduce the power consumption of the next wave of digital hardware while driving HPC and AI solutions. In 2020, Intel outlined its 2030 RISE strategy and corporate responsibility goals to accelerate the integration of responsible, inclusive and sustainable practices over this decade. In line with the EU’s climate targets, Intel is on track to achieve its 2030 sustainability goals, including achieving net positive water use by conserving, recycling and reclaiming water, and funding local water projects that restore more fresh water than it consumes. In addition, Intel will power its global manufacturing operations with 100% renewable energy and achieve zero total waste to landfills.