Newest Processors Deliver Premium Performance, with a Boost in Frame Rate of up to 25% Gen over Gen

SANTA CLARA, Calif., Sept. 24, 2017 – Intel today announced that its new family of 8th Gen Intel Core desktop processors will be available for purchase beginning Oct. 5, 2017. The new desktop processor family is built for gamers, content creators and overclockers who require premium performance. Ranging from Intel Core i3 to Intel Core i7, these processors deliver premium performance for what comes next, opening the door for a new level of faster, easier and more immersive experiences.

This new family introduces the first-ever 6-core Intel Core i5 desktop processor and first-ever 4-core Intel Core i3 desktop processor. The family offers a wide range of performance options for consumers with unlocked1 “K” processors that deliver maximum tuning flexibility at each brand level and up to 40 platform PCIe 3.0 lanes for system expandability on graphics, storage and I/O. These processors are supported with new Intel Z370 chipset-based motherboards.

The top of the product stack – the Intel Core i7-8700K – is Intel’s best gaming desktop processor ever.2 It is capable of 4.7 GHz maximum single-core turbo frequency, the highest frequency ever from Intel thanks to Intel® Turbo Boost Technology 2.0, making it a performance powerhouse for both single and multi-threaded applications.

“We are laser-focused on giving the enthusiast community the ultimate desktop experience, from chart-topping performance to a platform that can flex with their needs,” said Anand Srivatsa, general manager of the Desktop Platform Group at Intel. “Our 8th Gen Intel Core desktop processors deliver tremendous improvements across the board and – for gamers, in particular– offer an unbeatable experience.”

Gamers will revel in the powerful and fluid experience of gaming. Compared with 7th Gen Intel Core, gamers gain up to 25 percent more frames per second3 on popular and demanding games like Gears of War* 4. As gaming continues to expand to include a social audience while playing, performance while mega-tasking is critical so game + stream + record is now up to 2 times faster5 compared with a 3-year-old machine.

Save time and create more. The 8th Gen Intel Core desktop processor family positions Intel as the choice for speed, accuracy, power, format compatibility and high-quality graphics creation and consumption. Edit 4K 360-degree videos with ease – up to 32 percent faster6compared with the previous generation – plus, edit content up to 65 percent faster4compared with a 3-year-old PC.

For the platform, the new Intel Z370 chipset provides improved power delivery needed for the new 6-core processors to reach their maximum performance as well as enhanced package power delivery for overclocking and memory routing support. More than 50 new motherboard and system designs will be available from a variety of leading providers. 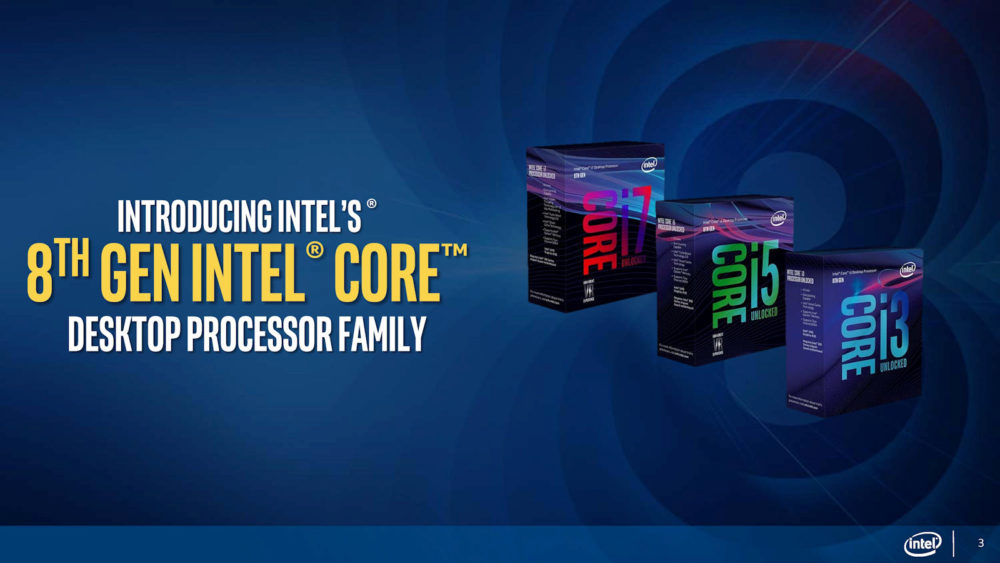 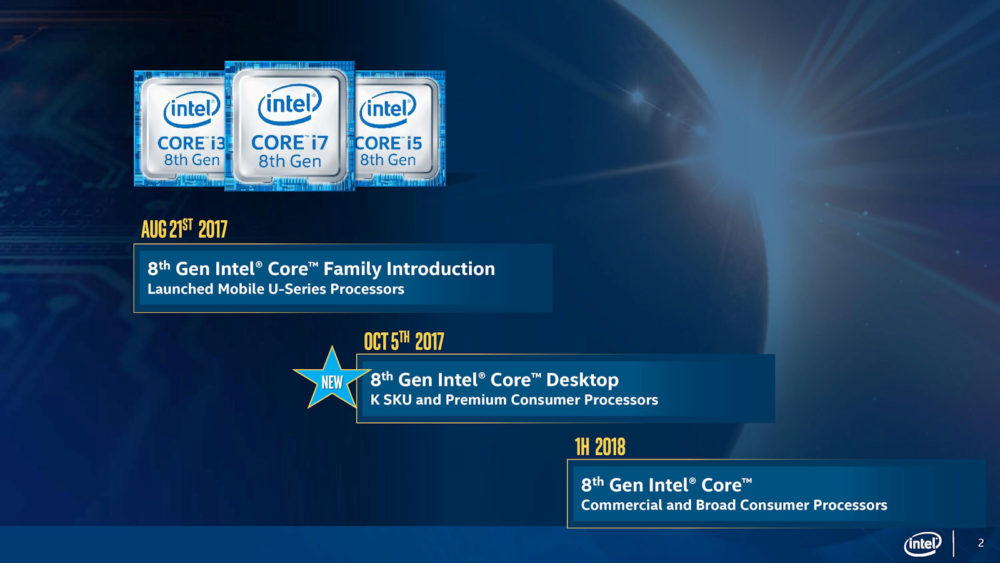 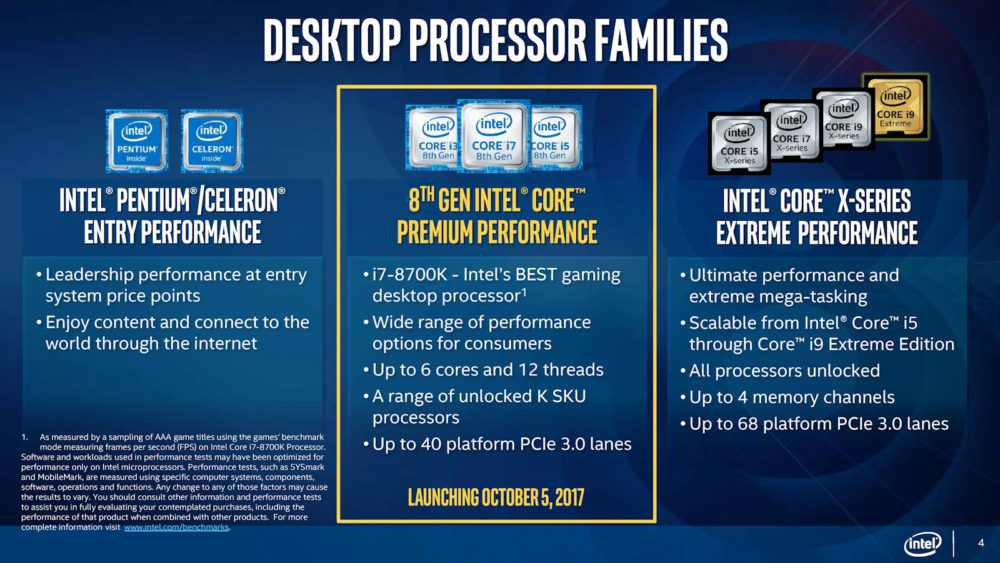 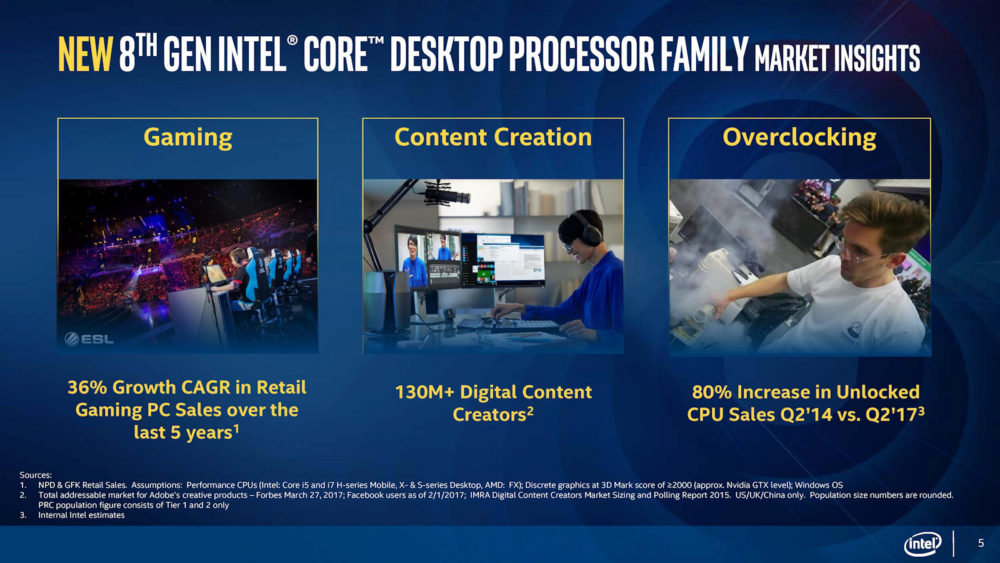 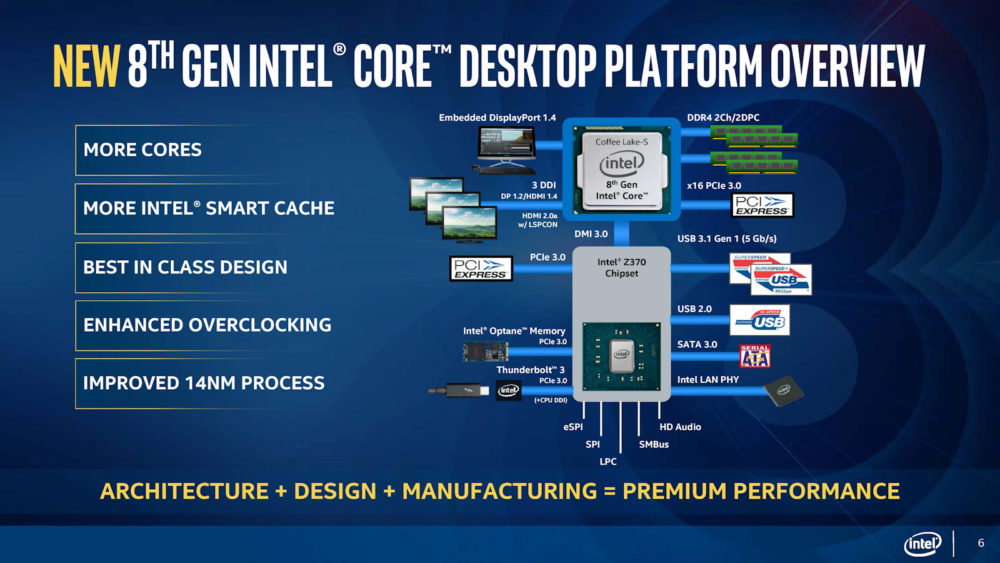 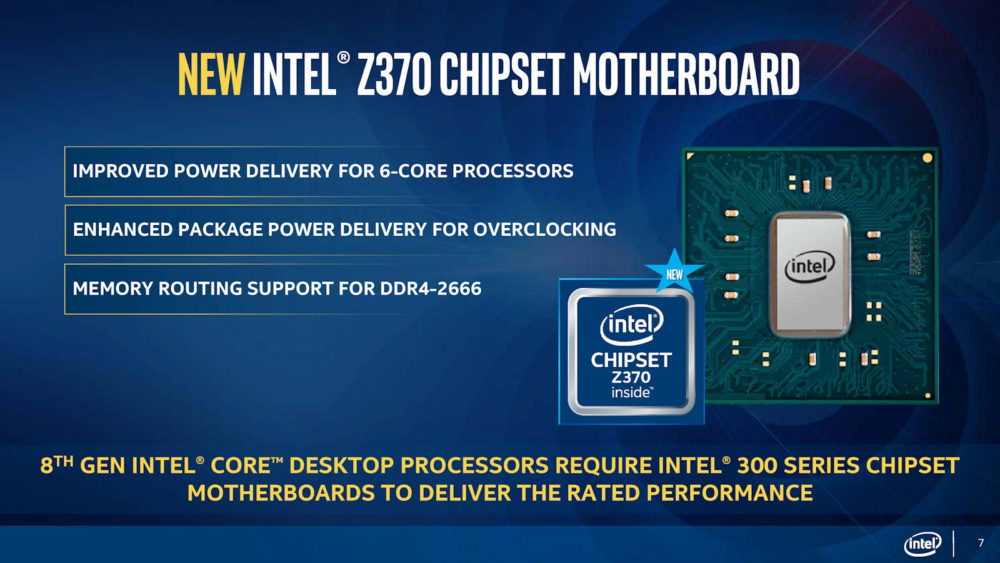 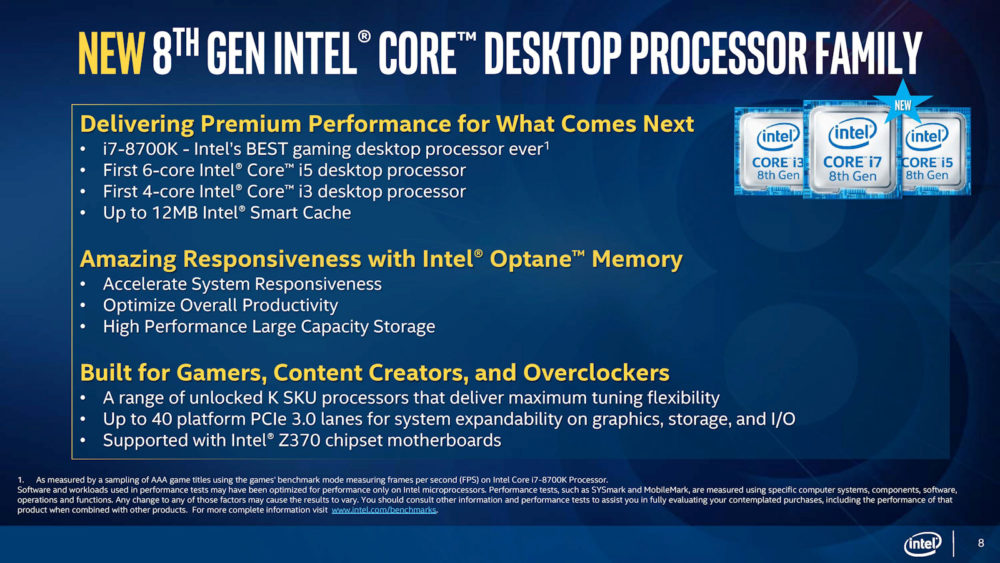 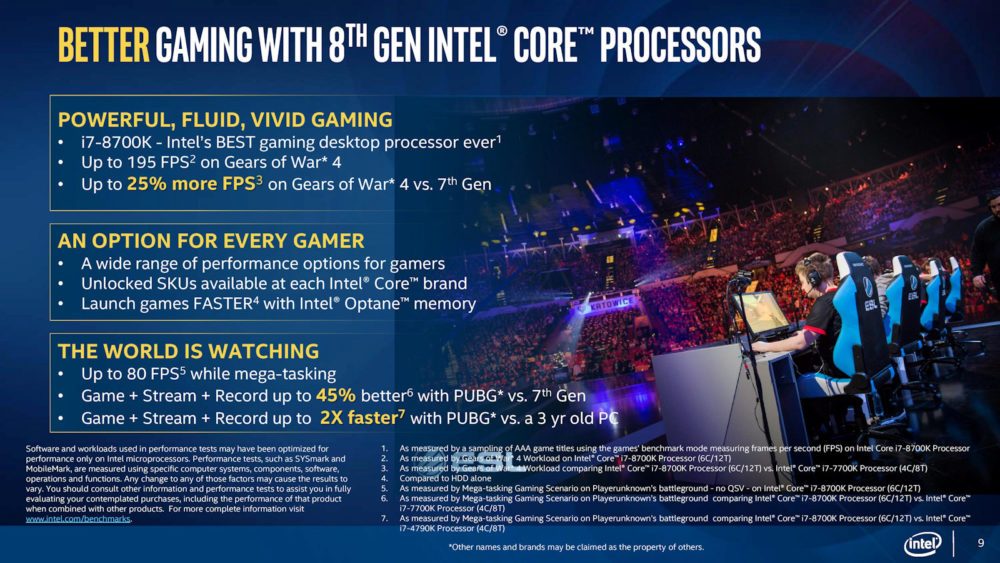 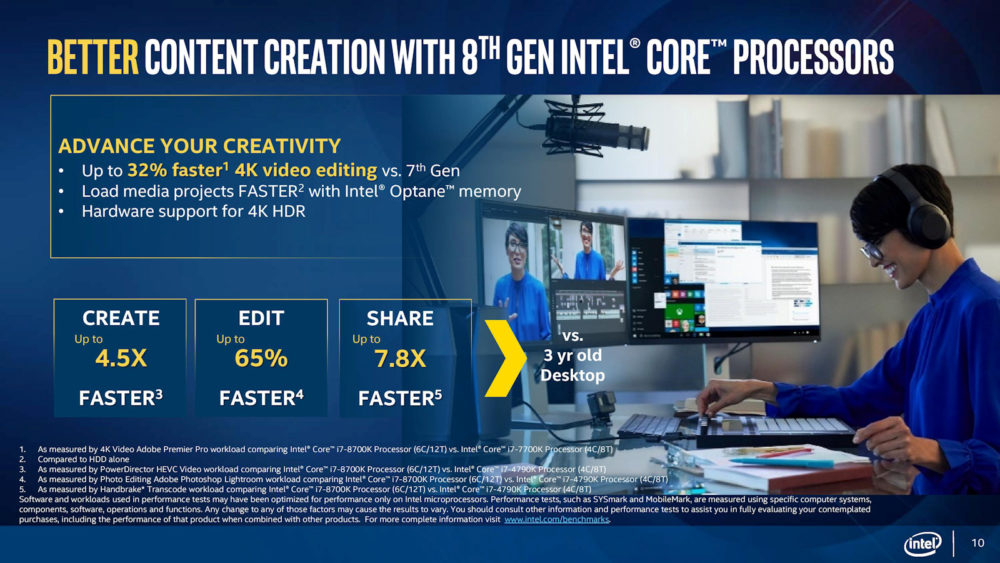 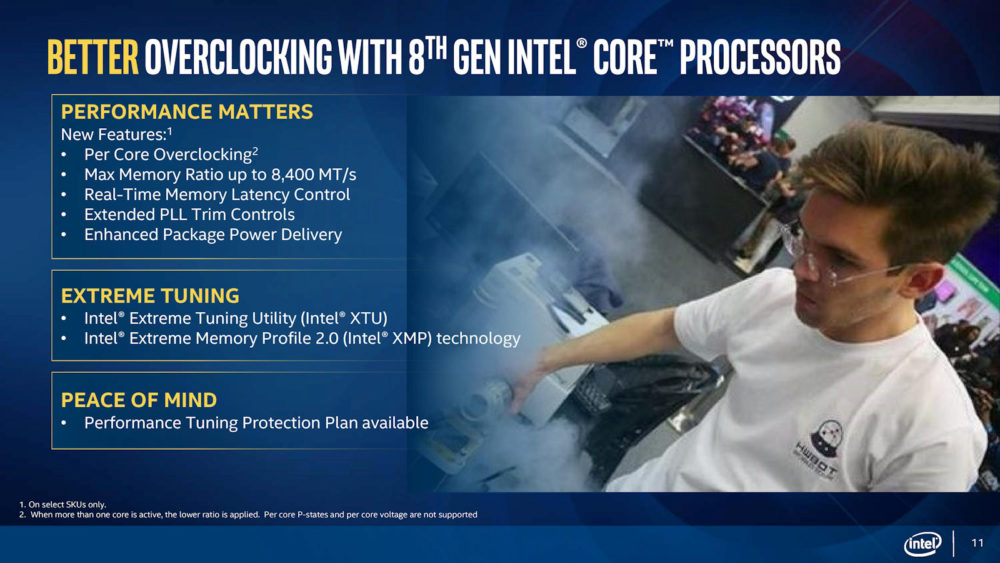 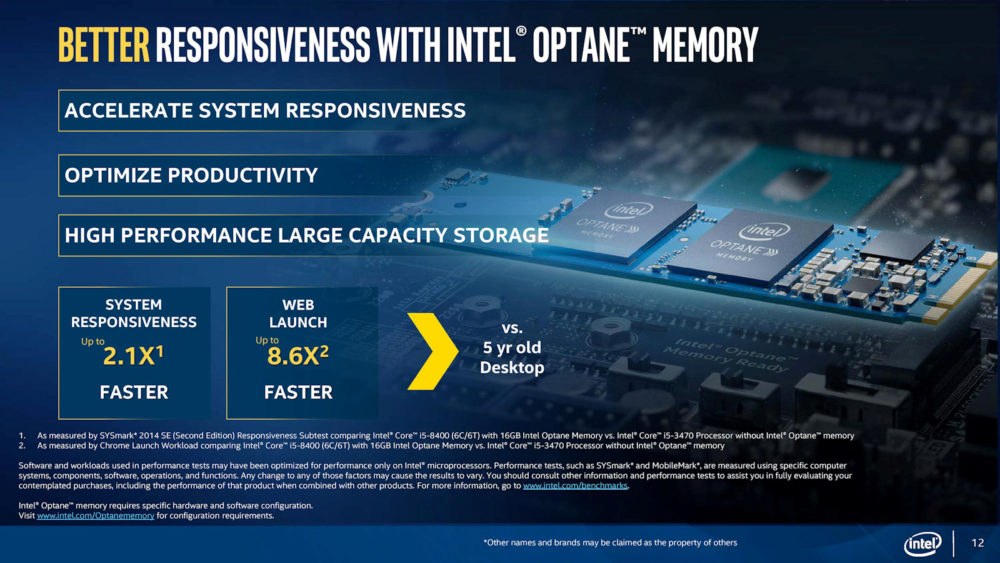 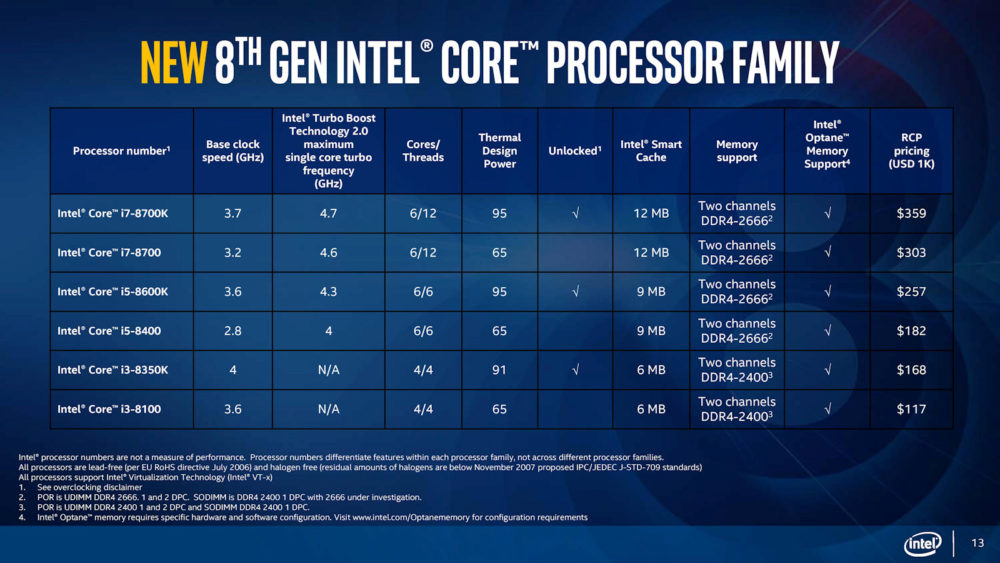 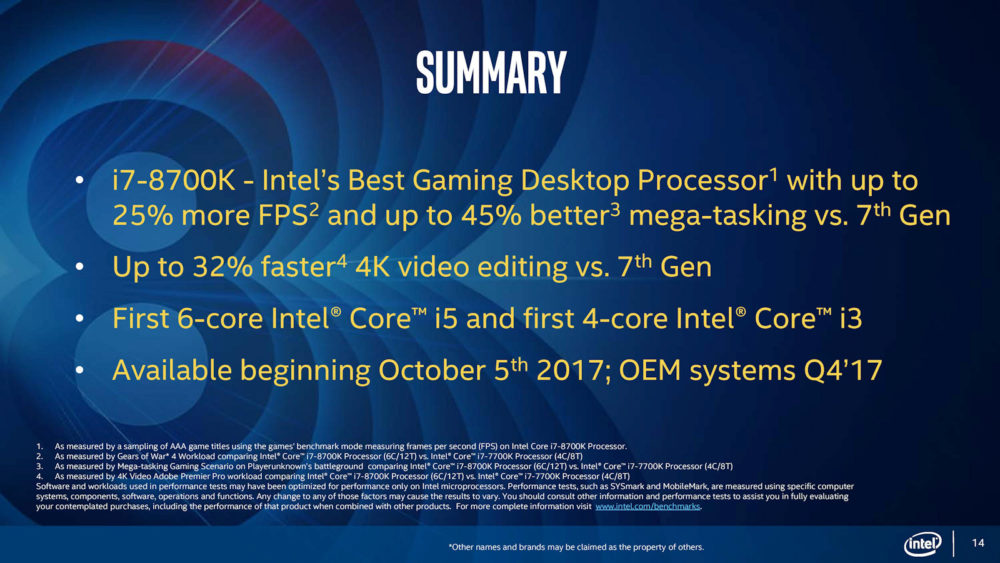