Year over year, total AIB shipments increased by 25.7% this quarter compared to last year at 12.7 million units, and up quarter-to-quarter from 11.47 million units in Q2’21. 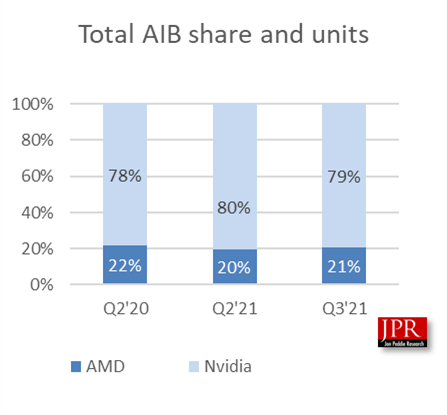 Add-in boards (AIBs) use discrete GPUs (dGPU) with dedicated memory. Desktop PCs, workstations, servers, rendering and mining farms, and scientific instruments use AIBs. Consumers and enterprises buy AIBs from resellers or OEMs. They can be part of a new system or installed as an upgrade to an existing system. Systems with AIBs represent the higher end of the graphics industry. Entry-level systems use integrated GPUs (iGPU) in CPUs that share slower system memory.

With the help of the rise of esports and the growing popularity of PC gaming, AMD and Nvidia have been reporting record game segment revenues over the past quarters.

The workstation segment surged to another volume record in Q3’21, OEMs and VARs are having a major impact by stocking up on inventory, the pandemic showed us what a disruption in the supply chain can do to availability, so we are seeing system integrators plan ahead.

Considering these trends and the addition of Intel into the AIB market we see positive signs overall for the industry. 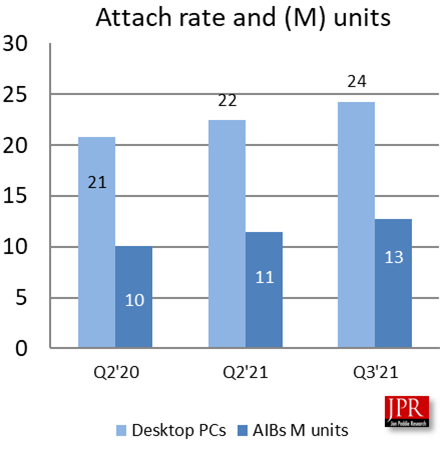 Shipments of Desktop PCs compared to desktop AIBs over time

On a year-to-year basis, we found total AIB shipments during the quarter rose 25.7%, which is greater than desktop CPUs, which rose 16.6% from the same quarter a year ago.

Dr. Jon Peddie, President of JPR, noted, “Intel is poised to enter the AIB market in 2022. It is unknown if the company will sell add-in-boards as AMD and Nvidia do, or just offer chips. The company is entering the market at a high point and may be surprised when the hangover of Covid and Cybermining falls off. The big question most people are asking is how much market share will the company take?”