EK®, the premium liquid cooling gear manufacturer, is introducing new water blocks for NVIDIA® GeForce® RTX™ 4080 Founders Edition graphics cards. The EK-Quantum Vector² FE RTX 4080 D-RGB comes in the form of a water block with a passive backplate and offers two options for the top material. It cools all the critical GPU components, ensuring peak performance and a prolonged lifespan of the card.

EK-Quantum Vector² FE RTX 4080 D-RGB GPU Water Block
The EK-Quantum Vector² FE RTX 4080 is a liquid cooling solution that is actually a set of a Vector² series water block, a black-anodized aluminum backplate, and a custom-made single-slot PCIe bracket – all in a single package. As with the previous 30-series Vector² water blocks, the look is dominated by minimalistic straight lines and the backplate coming around the side of the GPU to cover the PCB in its entirety.

The Vector² cooling engine combines the jet plate with a 3D-machined Plexi insert to improve flow distribution and thermal performance. This cooling engine is based on an Open Split-Flow cooling engine design, which proved to be a superior solution for GPU water blocks. It is characterized by low hydraulic flow restriction, meaning it can be used with weaker water pumps or pumps running on low-speed settings and still achieve top performance. EK took great care to achieve a symmetrical flow domain by utilizing an internal bridge to secondary components. This was done to ensure the cooling of secondary components without sacrificing the flow distribution over the GPU core.

All Vector² GPU water blocks use an 11-mm thick copper coldplate with a directly attached acetal terminal and a robust single O-ring top design. This simple construction provides confidence during customization and maintenance. Two distinctive and unique D-RGB lighting options are now available to complement the material choice of the product: Nickel + Plexi and Nickel + Acetal. Both versions include a black-anodized aluminum backplate and a base that is CNC-machined out of nickel-plated electrolytic copper. 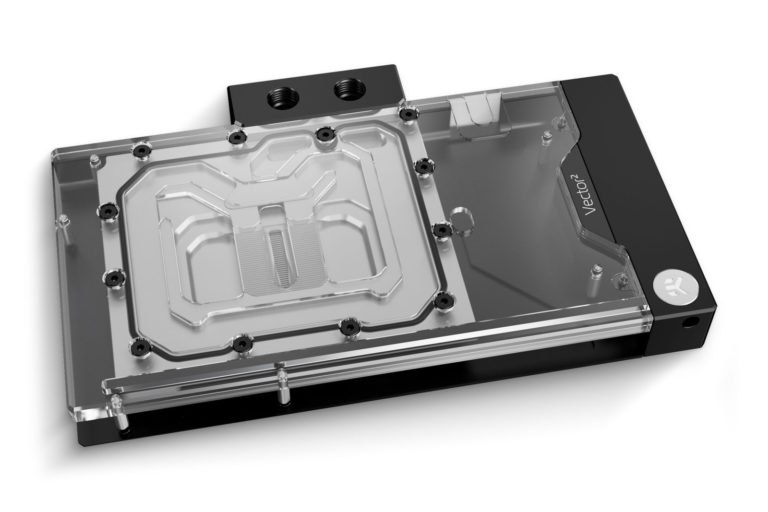 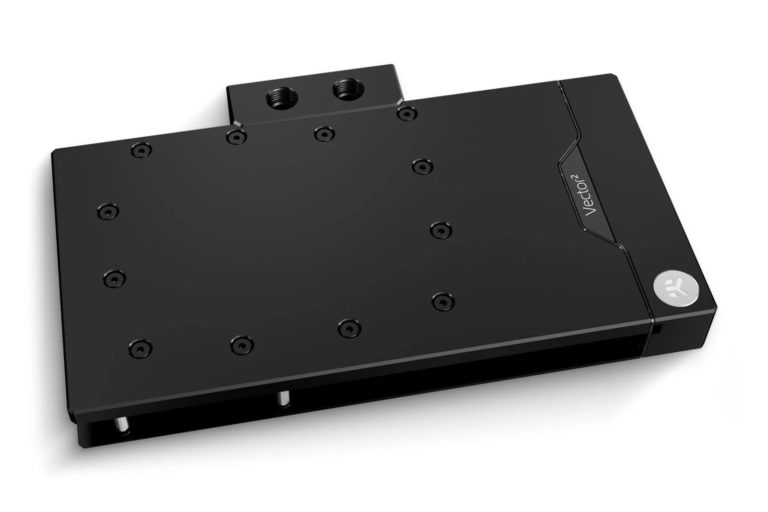 Tactile magnetic covers are used to conceal the terminal screws, allowing the branding to rotate when the GPU is inverted inside the case.

The GPU water blocks have a specific cutout that enables you to utilize the included multi-use tool to decouple the PCIe safety on the motherboard and easily unplug their GPU. The same tool is also used to detach the power cable more easily and tighten the standoffs.

EK-Quantum Vector² Backplate
Each Vector² water block comes with a CNC-machined black-anodized backplate. The backplates also include captive nickel-plated mounting screws to replace the original black ones. The backplate has a new L-shaped profile that comes in contact with the water block’s base and encloses the entire GPU. This increases the cooling surface, leading to even better performance. This connection with the water block, which is far more efficient at heat transfer, enables a further increase in performance. 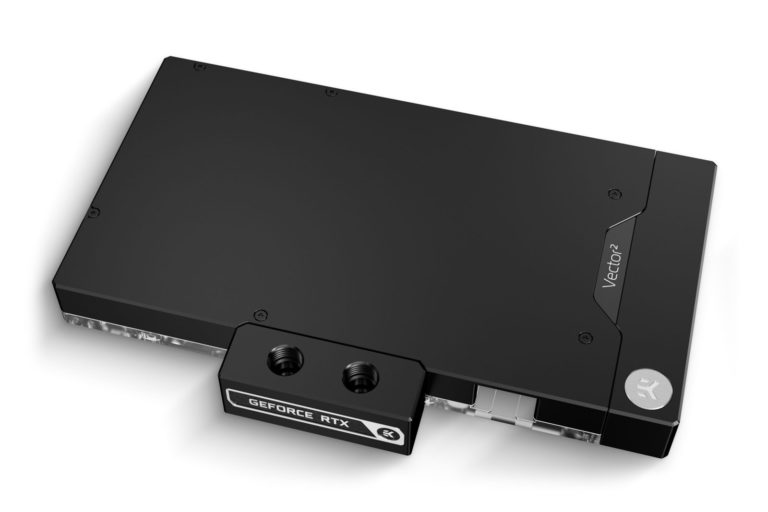 EK-Quantum Vector² FE RTX 4080 water blocks, backplates, and active backplates are compatible with NVIDIA GeForce RTX 4080 Founders Edition GPU. The EK Cooling Configurator will be updated regularly with AIB partner PCBs and models as new info comes in. EK plans to provide all popular AIB models with their own water blocks to ensure customers have a wide range of choices depending on their preferred brand or GPU size requirements.

The EK-Quantum Vector² FE RTX 4080 water blocks with included backplates and single slot PCIe brackets are available for pre-order through the EK Webshop and Partner resellers. This product is expected to ship out in late November 2022. The table below shows the manufacturer-suggested retail price (MSRP), VAT included.