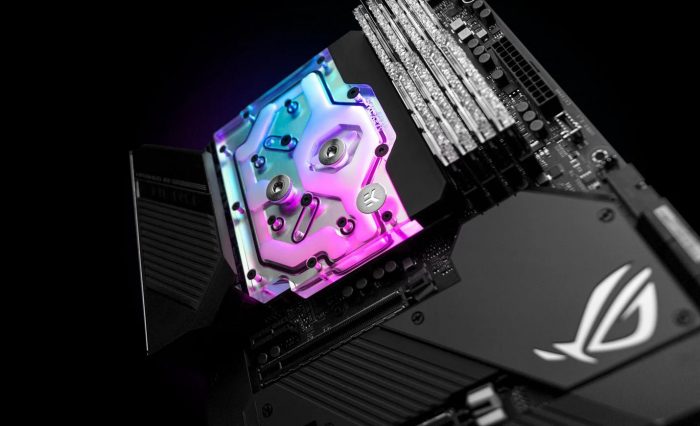 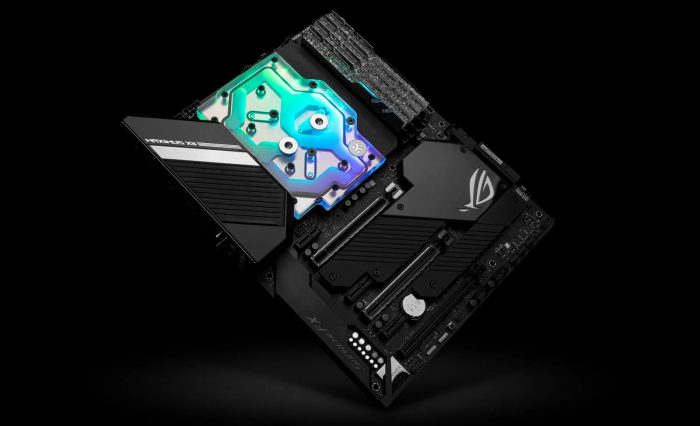 This is a complete all-in-one (CPU and motherboard) liquid cooling solution for Intel Socket 1200 Series Processors. The monoblock covers the entire VRM section of the ROG Maximus XIII Hero motherboard.

This monoblock boasts the latest generation Velocity cooling engine, used in the EK Quantum Lineup to ensure the best possible CPU and MOSFET cooling without reducing flow to other components. Liquid flows directly over all critical areas providing enthusiasts with an excellent solution for high and stable overclocks. Like every EK monoblock, the EK-Quantum Momentum ROG Maximus XIII Hero features a high flow design easily used in systems with weaker water pumps or lower pump speed settings. The Plexi version of this monoblock comes with sophisticated addressable D-RGB lightning, which connects to a standard 3-pin 5V D-RGB addressable header on the ROG Maximus XIII Hero.

This monoblock also features a special I/O shield to replace the stock one that is connected to the factory-mounted heatsink. It is all black with no marking on it and can reuse the original LED strip found in the stock I/O shield in case the user wants additional LED illumination.

The monoblock is made in two variants, with both sporting nickel-plated electrolytic copper base, while the top is CNC-machined out of either high-quality cast-acrylic or durable black POM acetal. The nickel-plated brass screw-in standoffs are all pre-installed and allow for easy and fast installation of the monoblock. The acetal version offers NO RGB support whatsoever and it comes in an all-new matte black finish.

A Digital (addressable) 3-pin 5V D-RGB LED strip is installed in the Plexi version of the monoblock. It connects to the motherboard’s ADD_GEN2 header, or it can be connected to any other supported 5V 3-pin LED controller. This product is compatible with ASUS AURA Sync software. The arrow marking on the 3-pin D-RGB connector is to be aligned with the +5V marking on the ADD_GEN2 header. EK makes sure that there are no LED hotspots by employing an acetal cover for the LEDs as proper LED implementation is one of the key principles in EK design.

EK-Quantum Momentum ROG Maximus XIII Hero monoblock is made in Slovenia, Europe. It is available for pre-order through the EK Webshop and Partner Reseller Network. This product is expected to ship out in late July 2021. In the table below, you can see the manufacturer suggested retail price (MSRP), VAT included.