BATTLEFIELD™ PORTAL – YOUR BATTLEFIELD. YOUR RULES.

Battlefield™ is a rich series that has taken you to many eras of warfare over the past 19 years. And now we’re including an exciting way for you to experience and celebrate that lineage. 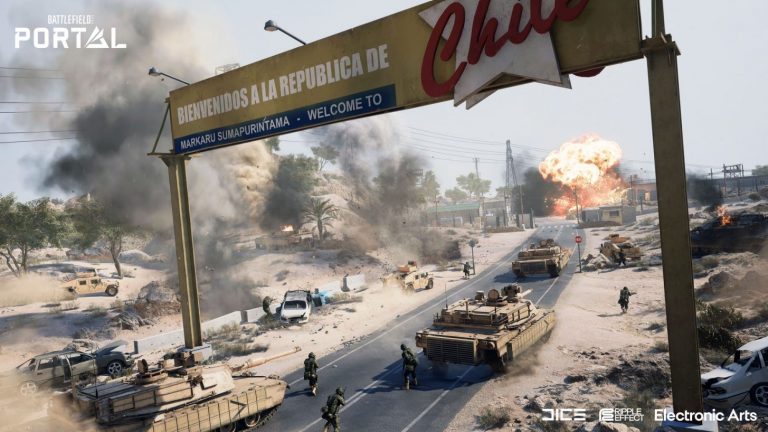 Battlefield™ Portal is a community-driven platform within Battlefield™ 2042 that will let you create and find fantastic experiences made by the series’ creative and passionate community. The creation suite includes Settings, custom modes, and a Logic Editor so you can build your own signature spin on Battlefield’s sandbox; you’ll be able to change team ratios, tweak victory conditions, restrict weapons, and even put different factions from different eras in Battlefield’s history against one another. Those who want to focus on discovering what others have created will have easy access to an entire world of unexpected battles featuring some of the series’ most famous eras mashed together in distinct, exciting experiences.

“Battlefield Portal is a love letter to fans and creators,” says Senior Design Director Justin Wiebe of Ripple Effect Studios™ (formerly known as DICE LA) “This creative suite will give the community more opportunity than ever before to create their own spin on the Battlefield experience.” 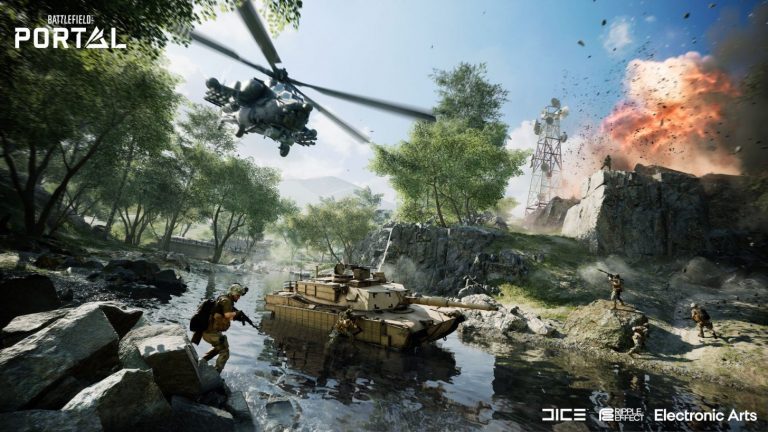 As an example of what you can do with the Settings, here’s a small selection you can use in Battlefield Portal at launch.

And this is just only a tiny portion of the options you’ll be able to adjust with these Settings. There will be some limitations such as not being able to build a Battle Royale mode (yes, we knew you would ask). But we mainly look forward to seeing you discover what’s possible with all these options at your fingertips.

From more tactical, realistic simulations to off-the-wall battles, the power is yours to shape Battlefield’s playground. There are many more Settings that will be available at launch and we can’t wait for you to discover them and to see the kind of experiences you can create.

In Battlefield Portal, you will be able to create Experiences for other players to join where you can run custom games or preset modes, such as Conquest, Team Deathmatch, Rush, and other fan-favorites available at launch. When creating Experiences, you can also add AI Soldiers as a team or select to use them as backfill, meaning when you launch the experience, AI will fill out that match (though you can opt out of using AI Soldiers entirely in Battlefield Portal). 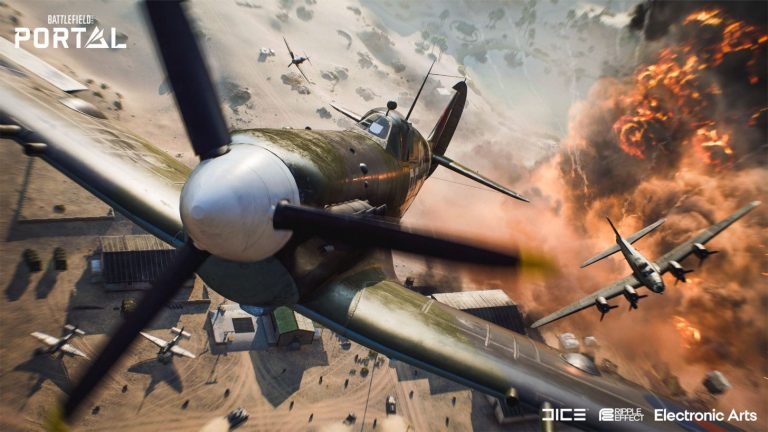 Community Experiences are created when you make a match, and will remain online while the Experience has players active. At launch you can also expect basic Admin Tools usable by creators of Experiences, such as the ability to ban usernames which continue across Experiences you create.

If you end up liking another player’s Experience, you can Follow that player to keep track of when they’re running matches. As a creator, you’ll be able to share your own creations and give others permission to build upon them with their Settings and logic edits (more on that below). Some of the most creative and popular player-created Experiences will be featured in official curated playlists, making it convenient for you to find fun and inventive new matches the moment you load into Battlefield Portal.

One of our biggest goals with Battlefield Portal is to give you the freedom to explore Battlefield your way by letting you create your own Experiences . For those who wish to go beyond the multitude of Settings, Battlefield Portal will also have a Logic Editor that lets players use streamlined visual scripting logic to have even more control when it comes to creating your experiences. While anyone can use the Logic Editor, it’s aimed at those who have prior knowledge of visual scripting logic.

While the Settings will allow you to change many specific conditions with the flick of a switch, the Logic Editor will let you define rules, victory conditions, consequences of specific in-game events (like setting a reward or punishment for a player scoring a kill), and even more to create custom game modes that aren’t possible to create with the Settings alone.

Battlefield Portal’s Logic Editor will give you more options than ever when it comes to creating your own Battlefield experience, letting you set victory conditions, team scale, and more.

You’ll also have the ability to share your Experiences with the community through an Experience Link (a URL), giving fellow players the power to share that Experience or even remix it with their own additions.

“Seeing the flexibility and wide variety of things players can do when they know how to use Battlefield Portal’s builder…it’s just kind of astonishing,” says Senior Game Designer Rob Donovan.

Battlefield 2042’s progression is synchronized and will allow you to contribute to your experience gains by playing throughout the various available game modes
We’ll be talking lots more on progression later this year, so stay tuned! 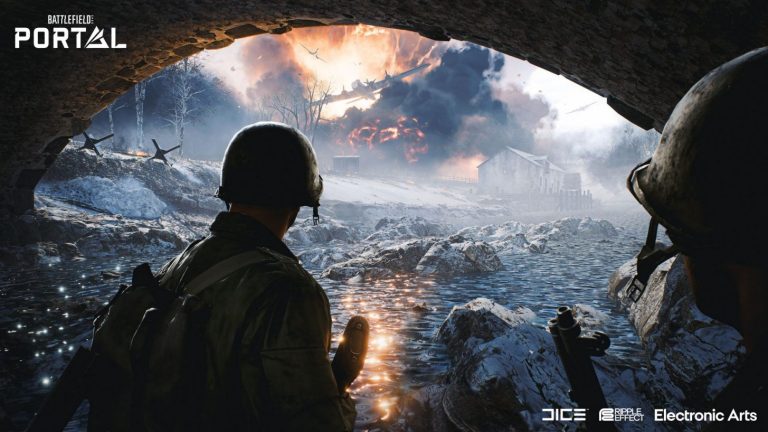 Alongside the creative suite, Battlefield Portal will also launch with reimagined content from 3 of Battlefield’s most popular entries. This content includes more than just the maps themselves but also brings over weapons, gadgets, vehicles, factions, and classes from each respective game — all reimagined at the visual standards of Battlefield 2042. Long-time Battlefield fans will once again be able to take up their M1 in a fully reimagined Battle of the Bulge or shoot across the sky in a F/A-18 Hornet at the Caspian Border.

Battlefield Portal will allow you to relive some of the series’ best moments in stunning new visual detail or use weapons, gear, factions, and maps from those games to build your own experiences.

You will also be able to use Battlefield 2042’s full arsenal of Specialists, vehicles, gadgets and weapons in Battlefield Portal to help you build unique experiences.

Here’s the full roster of reimagined maps that will be available at launch:

In addition to the classic maps, Battlefield Portal’s eras will also feature fan favorite weaponry such as the M1 Garand (Semi-Automatic Rifle) and the M416 (Assault Rifle) weapons. Classic vehicles such as the Spitfire and B17 Bomber will also make their return to the Battlefield franchise. We’ll be including a wide array of gear and soldiers that will be reimagined at Battlefield 2042’s visual fidelity too.

Battlefield Portal will allow you to mix eras against one another, letting you create new and wild Battlefield experiences. Ever wanted to see a dogfight between some Spitfires and a helicopter? Making it happen is as easy as tweaking some options in Battlefield Portal’s Settings. It’s your playground: Go wild.

Below is a top-level look at what you can expect to use when Battlefield 2042 launches later this year. Within Battlefield Portal, you will be able to use everything listed as tools to craft new modes and experiences using Battlefield Portal’s Settings and Logic Editor.

Alongside all of this reimagined content, Battlefield 2042’s weapons, vehicles, gadgets, and Specialists will be usable in the creative suite, giving you even more content to build or discover as you explore the many possibilities within Battlefield Portal.

We wanted to modernize these experiences but remain true to the original intent that the level designers had,” says Senior Producer Kristoffer Bergqvist. “What did people love back then? What do they love today? We spent so much time looking at forum posts to see what maps people remembered fondly. We talked to the original designers about what we should bring back. We pretty quickly landed on El Alamein and Battle of the Bulge as something we wanted to not only play, but also experience again.”

Bergqvist says the enhancements afforded by the Frostbite engine have made these versions of Battlefield 1942’s maps even more intense and faithful to DICE’s initial ambitions over 20 years ago. “Destruction in Battle of the Bulge is so cool. We are being true to what the original designers had in mind. We’re just able to go further now, and seeing that is awesome.”

We envision Battlefield Portal to be a powerful platform driven by the community’s sense of creativity and wonder. Through our live service we intend to continue delivering updates for you to use as tools to build and share your experiences or to discover as you peruse Battlefield Portal. We’re looking forward to seeing the thrilling experiences you’ll be creating! Once it’s in your hands, stay in touch and let us know what’s fun for you and what other features you’d love to see in the future.

With continued updates delivered through Battlefield 2042’s live service, such as new Specialists, maps and weapons, we have the intent to make them available in Battlefield Portal. “As we add new updates to Battlefield 2042, they will be available for Battlefield Portal players and creators, giving them even more options to create the kind of the experiences they desire as the game grows,” Bergqvist says.