BIOS UPDATES FOR THE 500 SERIES MOTHERBOARDS 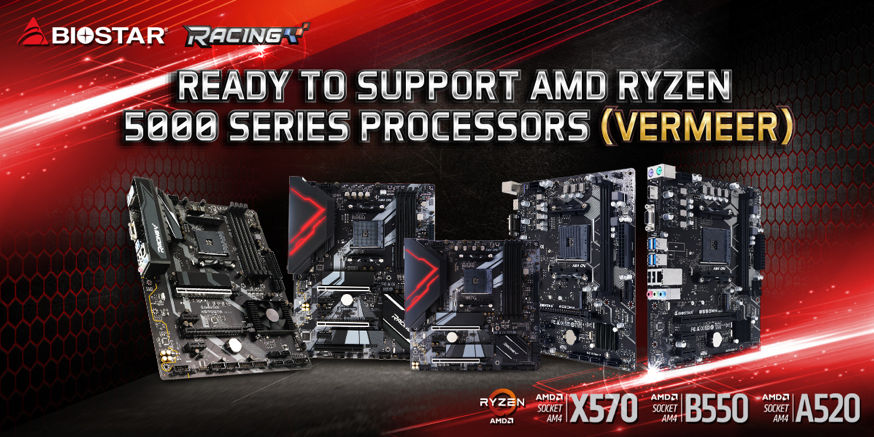 AMD’s next generation Ryzen™ 5000 series desktop processors, based on Zen 3 architecture, are set to take the mainstage with Ryzen™ 9 5950X, Ryzen™ 9 5900X, Ryzen™ 7 5800X and Ryzen™ 5 5600X more powerful than anything the market has seen so far. AMD promises absolute dominance in the processor game with chips reaching up to 16 cores / 32 threads on the AM4 socket with information suggesting that their IPC gain and the iterative performance far outperforms Intel’s 14nm chips on both compute power and gaming.

With the whole tech industry abuzz with anticipation for the latest AMD processors, BIOSTAR proudly announces that their AM4 500 series motherboards are ready to run the latest and greatest processors. AMD has to throw at them with a wide list of supporting models to cater all user needs.

BIOSTAR consumers can rest assured that their dreams of upgrading to the latest AMD Vermeer series processors are fully achievable. With a few easy steps to update the BIOS version, users can enjoy the full benefits of the new Zen 3 processor range using their existing BIOSTAR 500 series AM4 based motherboards.

Gaming and content creation will gain huge benefits with the combination of AMD Ryzen™ 5000 series processors running on BIOSTAR AM4 500 series motherboards, with some of BIOSTAR’s proprietary power management functionality kicking in to deliver stable power across all hardware further enhancing the performance and longevity of the system.

The performance tests done by BIOSTAR shows how good the Vermeer series processors from AMD are and how well they respond on BIOSTAR AM4 motherboards. With test scores from 3DMark 11, Cinebench R20 as well as PassMark showcasing jawbreaking performance numbers especially from the AMD Ryzen™ 7 5800X as well as Ryzen™ 5 5600X, BIOSTAR has yet again proven how good their hardware is with exceptional performance and consistency.

For more information related to the BIOSTAR AM4 500 series motherboards to support the new AMD Ryzen™ 5000 series processors, please go to the download page of your motherboard’s product page and download the corresponding BIOS version as listed below.