When NVIDIA’s Ampere GPUs first stormed onto the scene, the GeForce RTX 3090 created an entirely new category of performance for the highest-resolution, highest-refresh-rate graphics and most demanding GPU compute tasks on the market. Now, the GeForce RTX 3080 Ti brings much of the power of that revolutionary graphics card to a wider audience. The RTX 3080 Ti’s massive complement of CUDA, RT, and Tensor cores teams up with 12GB of GDDR6X memory to create a potent package that’s tailored for gamers first. And in the hotly contested midrange of the market, the RTX 3070 Ti brings more CUDA, RT, and Tensor cores to bear for mainstream systems. 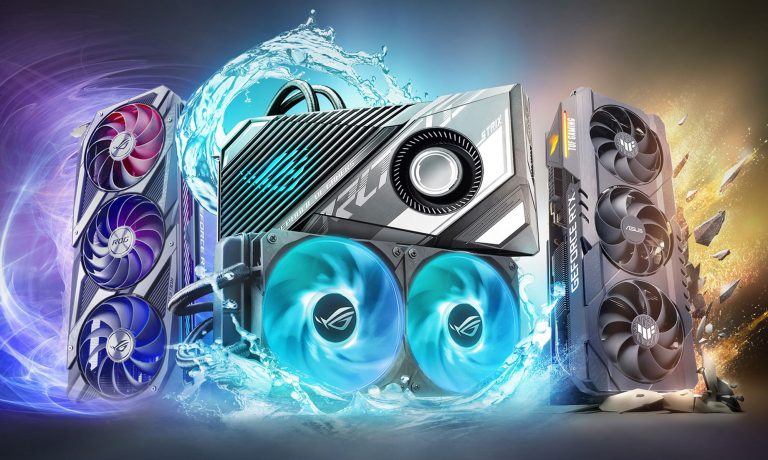 ASUS has taken advantage of these new, more powerful GPUs to create custom designs that serve up high clock speeds, low temperatures, and whisper-quiet noise levels. The ROG Strix LC GeForce RTX 3080 Ti is our first Ampere card to use a hybrid liquid-cooled design for incredible performance potential, while ROG Strix and TUF Gaming versions of both the RTX 3080 Ti and RTX 3070 Ti deliver distinctly different takes on air cooling.

The ROG Strix LC GeForce RTX 3080 Ti chills out under water
To unleash the potential of the GeForce RTX 3080 Ti, we turned to a solution that PC builders the world over already know and love: we put it under water. This card’s fusion of speed and style starts with an angular shroud and addressable RGB LED accents that shine through bold striations on its surface. This time around, we designed a stealthier metallic accent for the cooling shroud. It largely omits our trademark cyber-text accents for a clean look that’s ready to integrate with the colorful lighting, monochrome tones, and diverse textures of other ROG hardware. We enshrouded the fan and lighting cables in the anti-abrasive webbing on each coolant hose for an especially refined presentation. 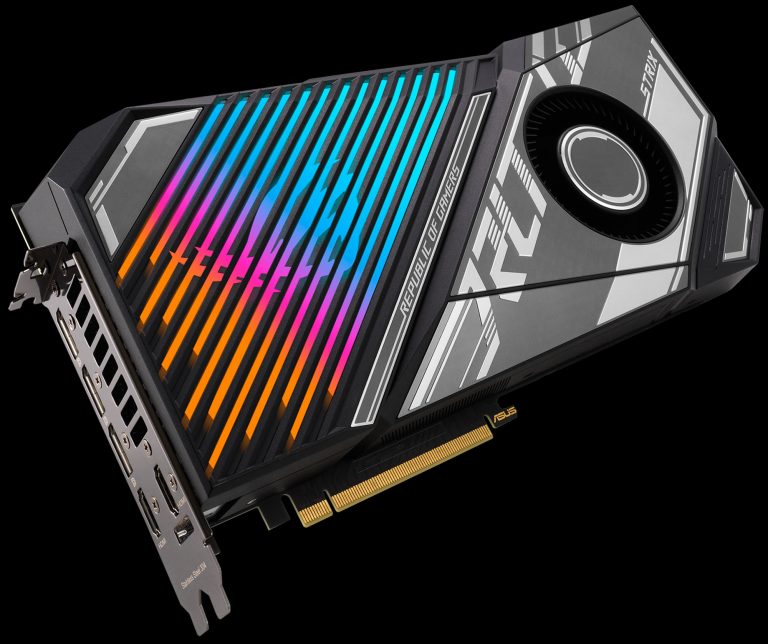 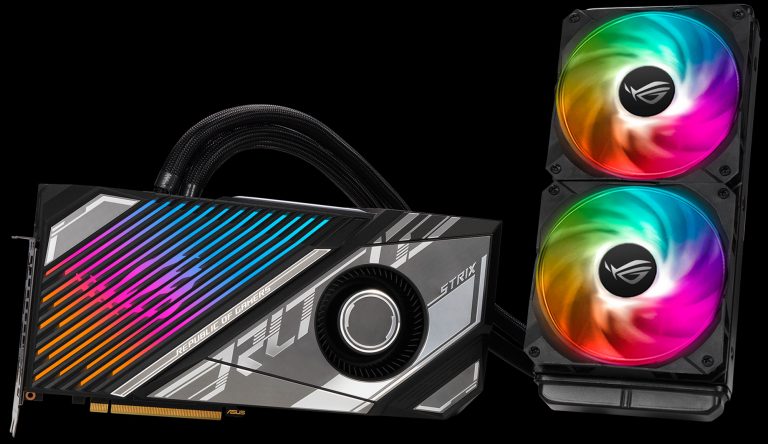 Underneath the shroud, a custom full-coverage water block transfers heat from the GPU and GDDR6X memory directly into a liquid-cooling loop rather than the inside of your case. Coolant passes through extra-long 600mm hoses to a 240mm radiator. The generous length of these hoses, combined with the broad case compatibility of the 240mm radiator, means that enthusiasts can confidently install the ROG Strix LC GeForce RTX 3080 Ti in even the most cavernous enclosures. This versatility lets system builders experiment with the best airflow path for their graphics card’s needs, too. Mount the radiator at the top of the case to let exhaust heat bypass your case’s interior entirely, or mount it on the front with the fans configured as intakes to chill the card with the coolest possible airflow. The choice is yours.

The liquid cooling loop is the star of the show for the ROG Strix LC RTX 3080 Ti, but this card would be nothing without its fans. A pair of custom-designed 120mm units, optimized for both high CFMs and high static pressure, keep plenty of air moving through the dense fins of the remote radiator. A low-noise blower fan under the card’s shroud cools a low-profile heatsink to ensure those crucial components stay cool under stock or overclocked loads. 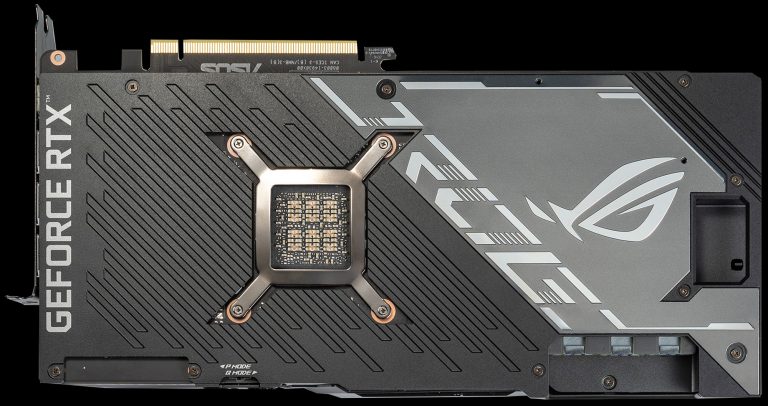 The ROG Strix LC GeForce RTX 3080 Ti also allows you to extend the card’s fan-control intelligence to two case fans using a pair of our trademark FanConnect II headers. Rather than using a rising CPU or motherboard temperature as an imperfect proxy for increases in GPU temps, the FanConnect II headers can monitor the temperature of the graphics processor itself to increase airflow right when it’s needed for optimal temperatures over long gaming sessions.

The ROG Strix GeForce RTX 3080 Ti and ROG Strix GeForce RTX 3070 Ti boast all of our latest refinements and innovations in air cooling. A massive 2.9-slot heatsink comes wrapped in an aggressively angular shroud with a full-length addressable RGB LED array on the left edge for a look that’s undeniably fresh yet unmistakably ROG. The new look extends to the full-length metallic backplate, where contrasting textures and subtle monochrome shades surround an eminently functional cooling cut-out that allows heated exhaust airflow to rise into your case’s natural airflow path. 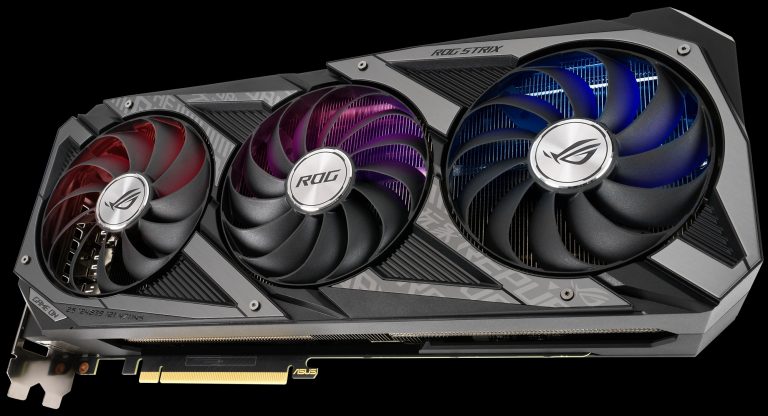 Three fans built using our latest Axial-tech design spin in a counter-rotating pattern to deliver a smooth, directed stream of air through the high-surface-area fin stack. Higher blade counts on each fan increase both static pressure and the cubic feet per minute of airflow available, all without undesirable increases in noise levels. Notched barrier rings on the outer two fans and a solid barrier ring on the central fan further manage turbulence and ensure that cooling air consistently reaches the hottest parts of the heatsink for the lowest temperatures and highest performance. At idle, the fans drop into a 0dB mode that helps to minimize your system’s noise levels. And FanConnect II headers let your case fans deliver a blast of cool air right when it’s needed.

Ampere graphics cards deliver a large performance-per-watt improvement compared to their predecessors. To fully exploit these improvements, they can draw more power overall. The massive ROG Strix heatsink and a carefully designed PCB allow us to support that improved performance with large amounts of raw electrical power.

Up to three eight-pin PCI Express power connectors draw current directly from your PSU for less stress on your motherboard, and a high-resolution transient-sensing circuit monitors that flow of power for dips that can negatively impact system stability. This sensitive circuit can save you hours of troubleshooting frustration in the event that your power supply can’t keep up.

If your DIY PC is built to fly under the radar, the TUF Gaming GeForce RTX 3080 Ti and RTX 3070 Ti are for you. Both cards embrace an ultra-stealthy new aesthetic. A blacked-out, brushed-aluminum cooling shroud wraps around a 2.7-slot heatsink cooled by a trio of fans built with our proven Axial-tech design. 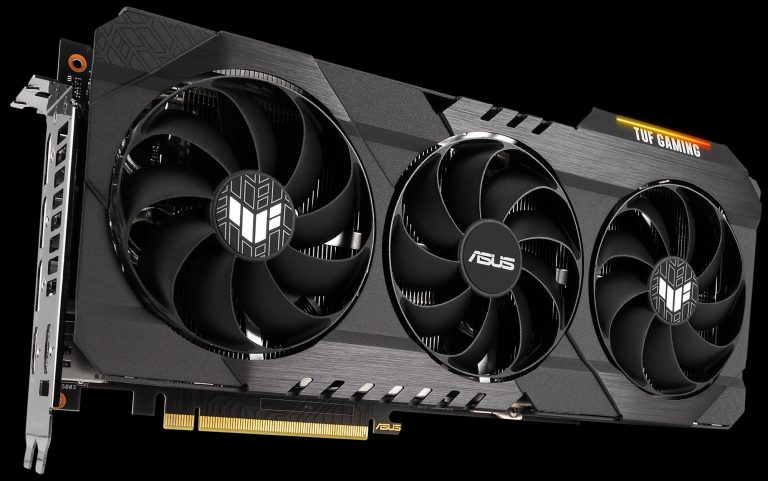 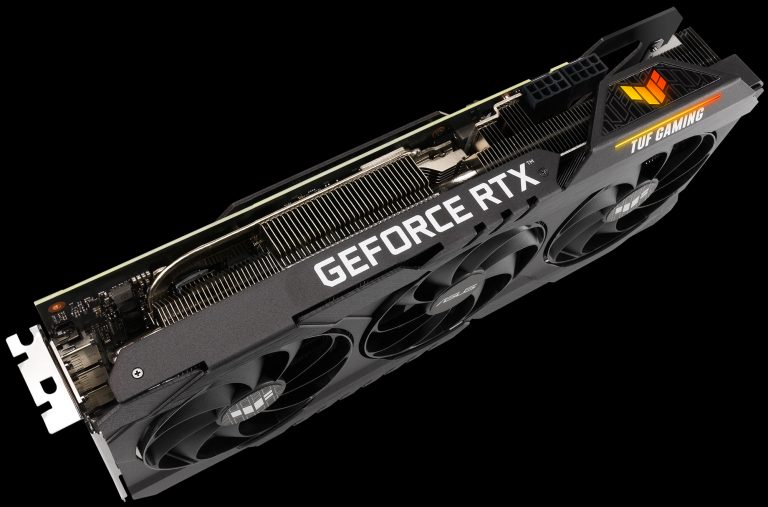 Like their Strix brethren, these TUF Gaming cards can stop their fans entirely at idle for silent running. A full-length aluminum backplate boasts a cooling cutout at the front of the card to help heat flow into your case’s natural airflow path. And a single Aura RGB LED accent at the front of the card integrates with Aura Sync lighting schemes without drawing undue attention.

TUF Gaming graphics cards aren’t just tough on the outside. Auto-Extreme assembly technology, used across our lineup, precisely places and solders components without human intervention to boost reliability and build quality. Extra-sturdy capacitors in the power-delivery subsystem are selected for long life spans under grueling conditions, and a 144-hour testing regime at the factory ensures that each card is ready to perform from the moment you install it in your system. 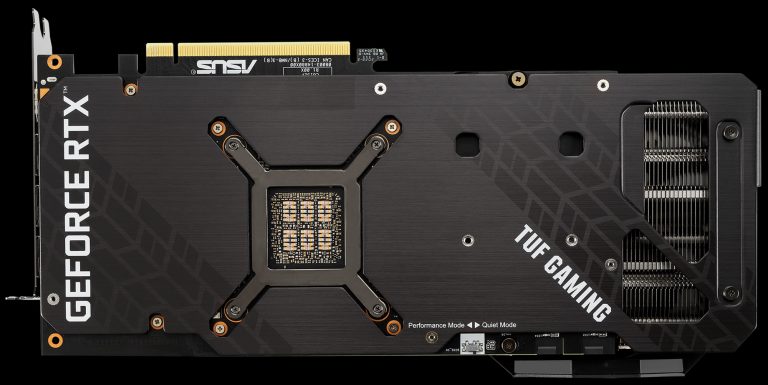