Each year at Arm, we announce brand-new premium GPUs for the mobile market. However, this year we decided to go one step further, to ensure the best experiences live forever by launching a brand-new flagship GPU called ‘Immortalis.’ This extends our GPU range beyond Mali, the world’s most shipped GPU at 8 billion units to date. 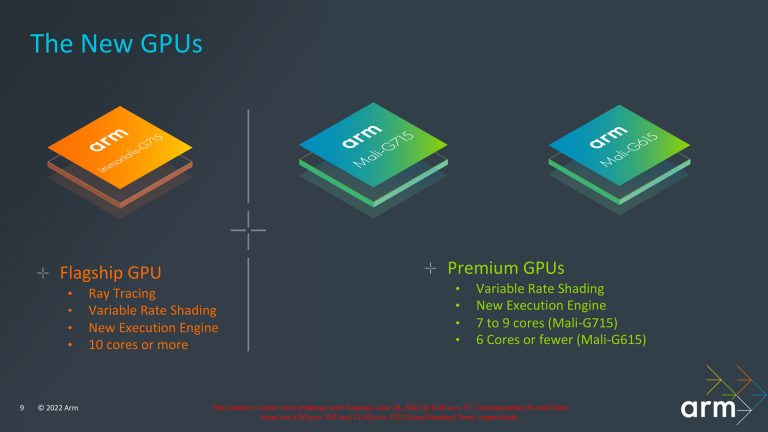 Immortalis is designed for the very best flagship smartphones coming to the market, with gaming excellence at the heart of the design. Immortalis-G715 delivers ultimate gaming experiences with the highest performance and very best graphics features. One of these features is ray tracing, with Immortalis-G715 being the first Arm GPU to offer hardware-based Ray Tracing support on mobile.

Alongside a new flagship GPU, we are also launching the new premium Arm Mali-G715 GPU that brings new and updated graphics and GPU features to mobile. These include Variable Rate Shading for significant energy savings and a further gaming performance boost, and an improved Execution Engine. The second GPU in the premium range – Arm Mali-G615 GPU – offers the same features, but at a lower core count of 6 or below compared to Mali-G715’s 7-9 cores.

Pushing the boundaries of mobile graphics

As mentioned previously, we have now unleashed more features, with Ray Tracing capabilities on Immortalis-G715 and Variable Rate Shading across all the new GPUs. 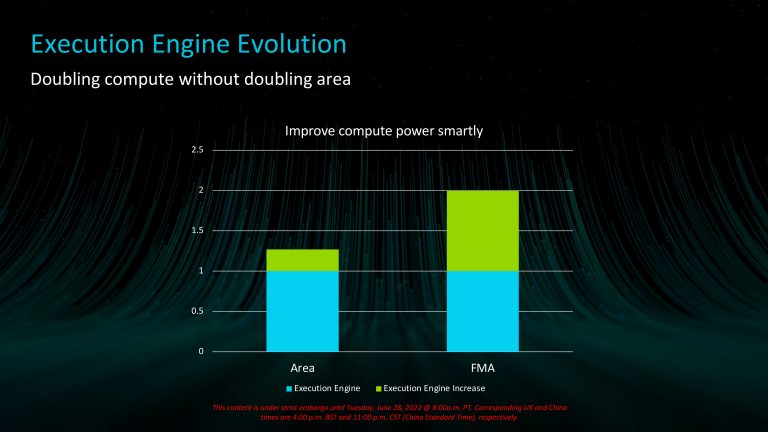 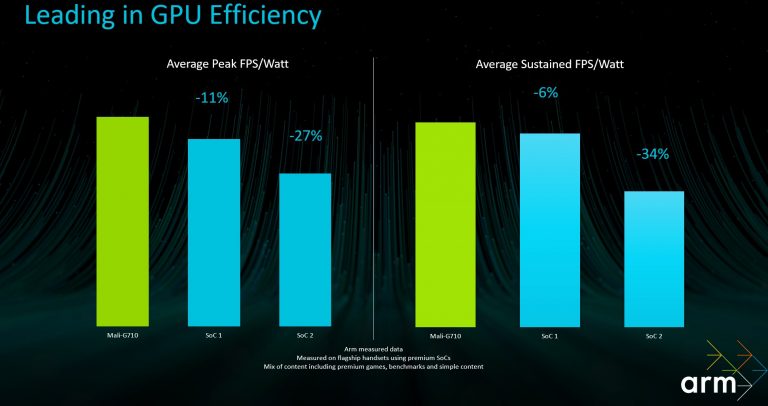 Alongside performance, our GPUs deliver the highest ever energy efficiency, so the end user can enjoy more game time while ‘on-the-go.’ This builds on the Arm Mali-G710 GPU, which is delivering outstanding GPU efficiency on flagship and premium Android smartphones. Across a mix of content, including premium AAA games, benchmarks, and light workloads, Mali-G710 beats the competition in FPS/W for both peak and sustained workloads.

Supporting performance and efficiency is our drive for more machine learning (ML) and intelligence on mobile devices, with our new GPUs delivering 2x architectural ML improvements. GPUs can be better suited to a range of ML workloads, such as image processing and precision flexibility, on mobile devices for more advanced user experiences.

And, last but by no means least, Arm is delivering more for developers. Our new GPUs are supported by a wide and comprehensive set of developer resources and tools to optimize performance and efficiency across all mobile gaming applications.

The new suite of Arm GPUs is focused on improving gaming experiences across flagship and premium mobile devices. Mobile gaming is set to pass the $100bn mark for the first time in 2022, according to the latest update from Newzoo’s 2022 Global Games Market Report. This makes up 51 percent of the overall gaming market.

As the market continues to grow, more complex and immersive AAA gaming experiences are now common on mobile. Leading AAA PC and console games all have mobile versions, including Genshin Impact, PUBG, Fortnite, Call of Duty and Honor of Kings, to name a few. Moreover, a new generation of users are increasingly choosing mobile as their gaming platform of choice. This is largely due to the convenience and capabilities of the gameplay on mobile devices. Arm’s role is to ensure that the latest flagship and premium smartphones deliver the AAA gaming experiences that end users are demanding.

The push for ultimate mobile gaming experiences is reflected in the features that we have added to our new GPUs. 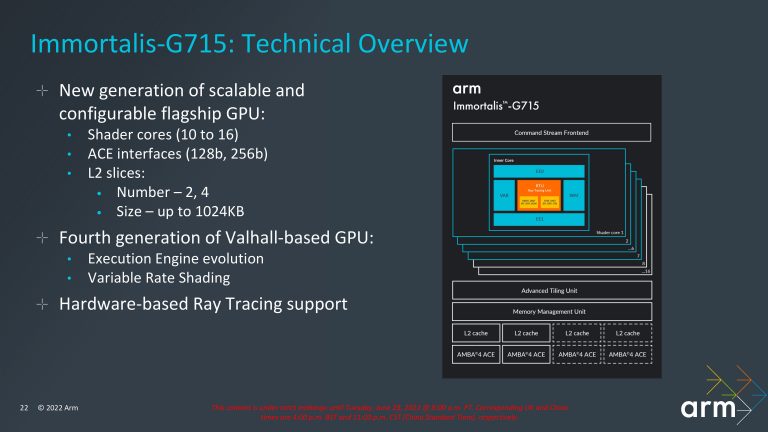 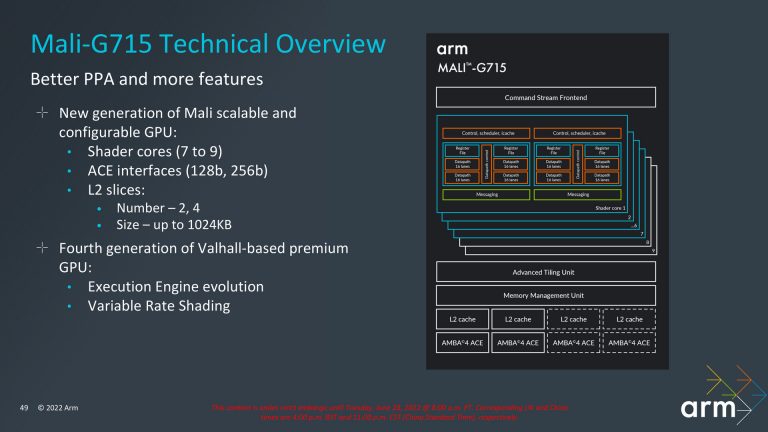 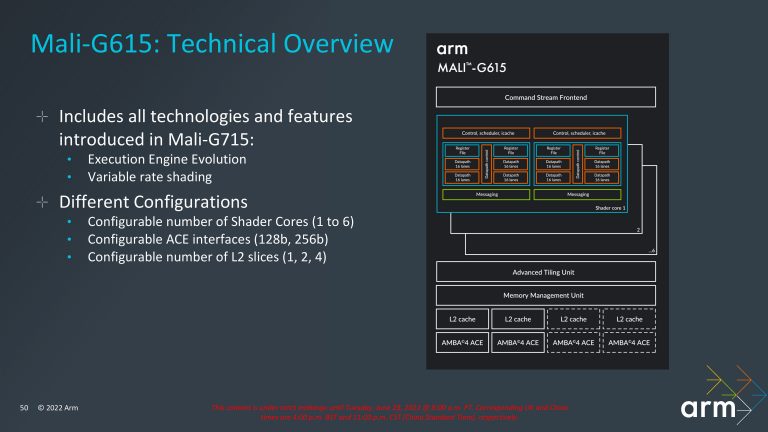 Immortalis-G715 is the first Arm GPU to offer hardware-based Ray Tracing support designed specifically for mobile. Ray Tracing is a computer graphics technique that generates realistic lighting and shadows by modeling the paths that individual light rays take around a scene. Essentially, this delivers more realistic gaming experiences. The results are impressive, as you can see in the following videos. 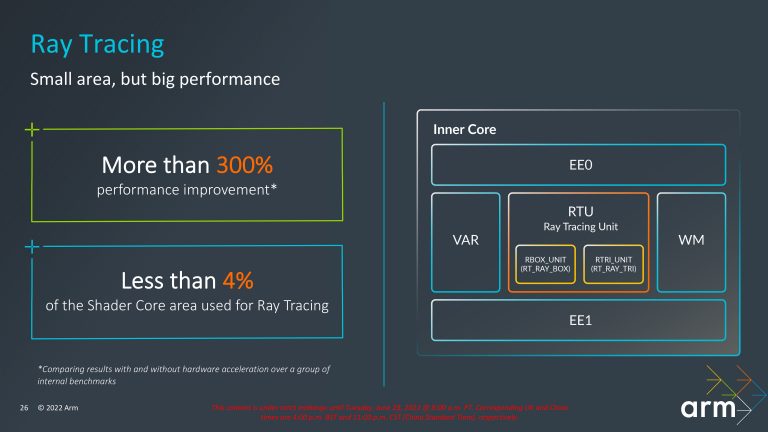 The challenge is that Ray Tracing techniques can use significant power, energy, and area across the mobile SoC. However, Ray Tracing on Immortalis-G715 only uses 4 percent of the shader core area, while delivering more than 300 percent performance improvements through the hardware acceleration.

Arm believes that Ray Tracing represents a paradigm shift in mobile gaming content. We decided to introduce hardware-based Ray Tracing support now on Immortalis-G715 because our partners are ready, the hardware is ready, and the developer ecosystem is (about to get) ready.

When Immortalis-G715 is featured in flagship smartphones at the start of 2023, we see this as the foundation for the ecosystem to start exploring Ray Tracing techniques for their gaming content. This will help to prepare for a fully fledged transition to Ray Tracing on mobile as the technology continues to evolve in the next several years.

Variable Rate Shading is a new graphics feature that is present across all the newly launched GPUs. It provides significant energy savings and a performance boost through optimized rendering where it matters on graphics and visuals. Essentially, it takes a scene and focuses the rendering on the parts that need it at a fine pixel granularity. Typically, this would be where the game action takes place. Areas that require less focus, such as background scenery, are rendered with a more coarse pixel granularity. The gaming scene would still maintain its perceived visual quality, as seen in the following images, but with energy savings. When enabling Variable Rate Shading on gaming content, we have seen improvements of up to 40 percent on frames per second (FPS). 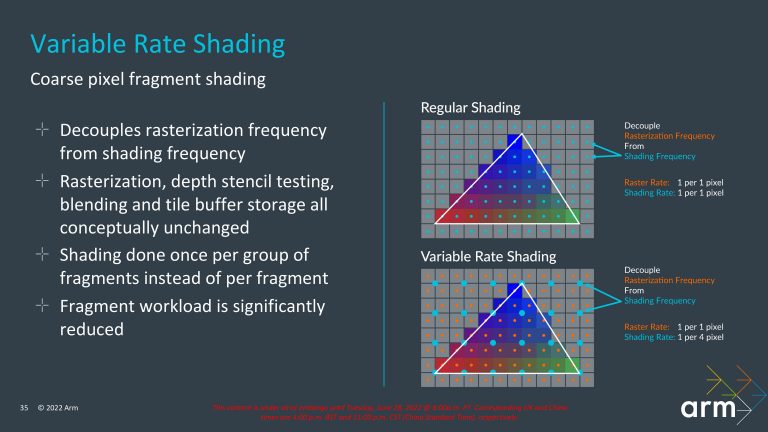 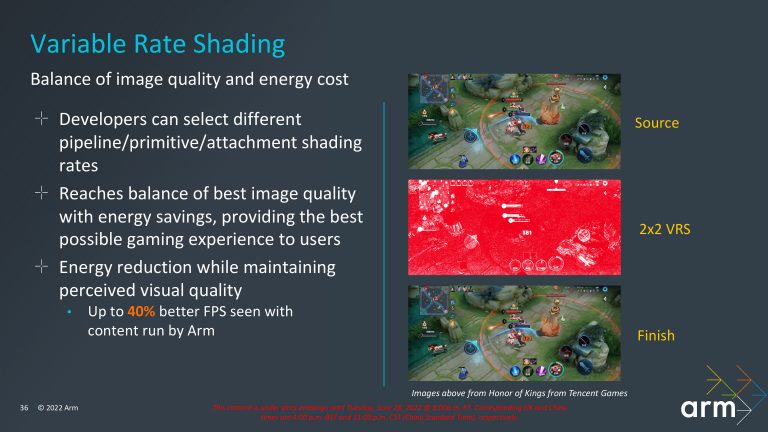 The evolution of the Execution Engine

Throughout all the new Arm GPUs, we have redesigned key elements of the Execution Engine to deliver improvements in compute power and energy efficiency.

Compared to the previous generation of Mali GPUs, we have redesigned the conversion block to deliver a significant area reduction. We have also revisited the fused multiply-add (FMA) – which we rejigged in the Mali-G710 – to further improve power efficiency. Furthermore, we have doubled the FMA block for yet more power improvements to deliver the compute required for more advanced visual effects. Finally, we have added support for Matrix Multiply instruction, which is vital for mobile use cases like computational photography and image enhancements, to help deliver the big 2x architectural ML improvements.

Through all these changes, we can improve power smartly, delivering 2x improvements in FMA power but with only a 27 percent area increase. Essentially, we are doubling the compute power for only a modest silicon area increase.

PPA improvements across the GPUs

In addition to the Execution Engine, we have made PPA (performance, power, and area) improvements in other areas throughout the new GPUs.

Command Stream Frontend – a feature introduced last year with the Mali-G710 – has been made faster. This is through adding hardware-based cross stream sync, adding more native commands, and increasing the number of scoreboards. The peak triangle throughput has been tripled. We have optimized explicit LOD (Level of Detail) lookups in the Texture Mapper to double throughput, and added a coordinate pre-processor unit to improve the efficiency of cubemap lookup. Finally, we have added Arm Fixed Rate Compression (AFRC) technology – first introduced in last year’s mainstream Arm Mali-G510 GPU – into our new GPUs to save bandwidth.

GPUs for the future of gaming

The new Arm GPUs have been designed with the future of gaming in mind. New complex and immersive AAA mobile gaming experiences will place increasing demands on mobile devices, with Immortalis-G715 designed to ensure that the best visual experiences live forever across future flagship smartphones.

Moreover, a new range of graphics features across all the new Arm GPUs enable a paradigm shift in gaming content. In particular, the adoption of hardware-based Ray Tracing support in Immortalis-G715 promises to transform the landscape of mobile gaming. Alongside all this, there are improvements in PPA to enable better mobile gaming experiences and longer play time.

The power of our IP combined with our range of graphics tools, training, resources, and optimizations provide the perfect conditions for game developers to deliver the very best gaming experiences. This allows them to create, optimize and then play on the flagship and premium smartphones of tomorrow.

The world of gaming is moving at a rapid pace and so is Arm. We are delivering a range of GPUs to empower future gaming innovation built on Arm. It is very much game on, as the mobile gaming tidal wave continues to gather pace.