iPhone 13 Pro: A15 Bionic with 5-core GPU for Best-in-Class Performance

A15 Bionic in the iPhone 13 Pro lineup is even more advanced, offering impressive power and efficiency, and driving the incredible new display, camera, and video features never before possible on iPhone. 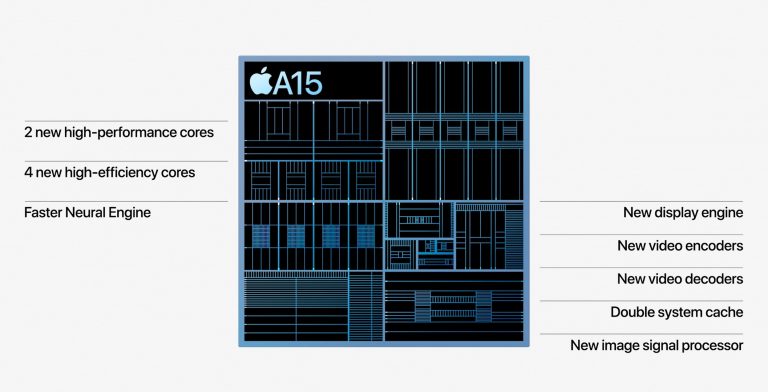 With 5-nanometer technology, A15 Bionic — the fastest chip in a smartphone — features a new 5-core GPU in the Pro lineup that brings the fastest graphics performance in any smartphone, up to 50 percent faster than the leading competition, ideal for video apps, high-performance gaming, and the slate of new camera features. The new 6-core CPU with two new high-performance cores and four new high-efficiency cores, is up to 50 percent faster than the competition and handles demanding tasks smoothly and efficiently. A new 16-core Neural Engine capable of 15.8 trillion operations per second enables even faster machine learning computations for third-party app experiences, as well as features like Live Text in Camera with iOS 15. And major advancements to the next-generation ISP provide improved noise reduction and tone mapping.

A15 Bionic is much faster than the competition, delivering more performance and better power efficiency, making everything even more fluid in the iPhone 13 lineup. It uses 5-nanometer technology and has nearly 15 billion transistors to tackle the most demanding tasks, including the latest computational photography features. A new 6-core CPU with two high-performance cores and four high-efficiency cores is up to 50 percent faster than the competition, the fastest in any smartphone, and handles demanding tasks smoothly and efficiently, while the new 4-core GPU is up to 30 percent faster than the competition and enables more lifelike visuals and lighting effects in graphics-intensive games. The new 16-core Neural Engine is capable of 15.8 trillion operations per second, enabling even faster machine learning computations for third-party app experiences, as well as features like Live Text in Camera with iOS 15. Major advancements to the next-generation ISP, paired with computational photography and powerful camera hardware, combine to create the new dual-camera system. 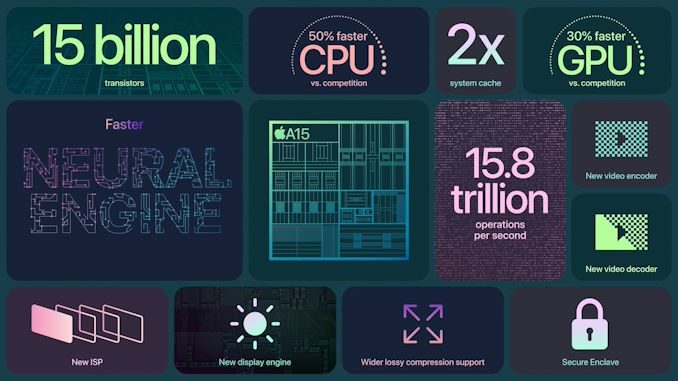 iPad mini gets a huge performance boost from the new A15 Bionic chip, with its incredibly efficient design that delivers all-day battery life.1 The 6-core CPU delivers a 40 percent jump in performance, and the 5-core GPU delivers an 80 percent leap in graphics performance compared to the previous generation of iPad mini. A15 Bionic on iPad mini handles even the most demanding tasks — from graphically rich games to pro apps used by designers, pilots, doctors, and more. With its powerful performance and compact design, iPad mini is the ultimate tool users can take anywhere.

Advanced machine learning (ML) functions are powered by a 16-core Neural Engine and new ML accelerators in the CPU, delivering 2x faster ML tasks than its predecessor. Combined with the CPU and GPU, the Neural Engine enables apps to deliver next-level experiences, such as image recognition and natural language learning. With iPadOS 15, powerful new ML features include Live Text, which uses on-device intelligence to recognize text in photos that users can take action on, and even translates text from photos into seven different languages. 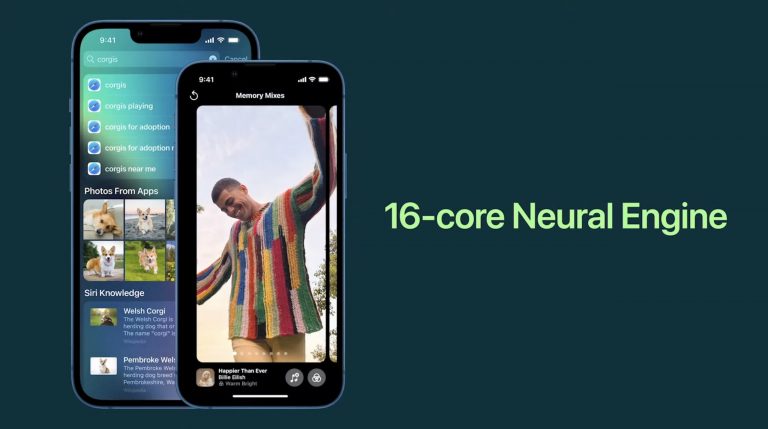