TAIPEI, July 12, 2021 — In the recent 4K gaming monitor race, GIGABYTE was off to a great start with the AORUS FV43U, the world’s first 4K tactical gaming monitor that supports HDMI 2.1. With its perfect mix of 4K image quality, esports-grade refresh rate, HDMI 2.1 standard, and many other top-notch specs, the coveted displays immediately attracted massive attention since the announcement and sold out on the first day of the launch on Newegg. The FV43U was also praised by Tom’s Hardware, the world-renowned tech media, and received Editor’s Choice Award for its class-leading performance in the gaming department, calling it the King of the 43-Inch Class. 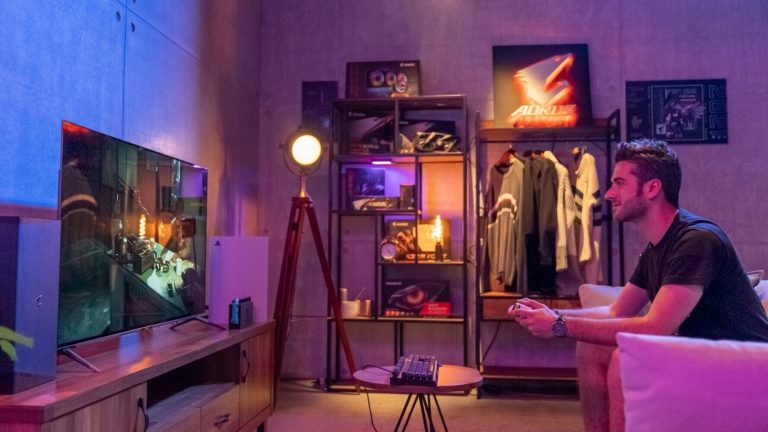 Riding the FV43U’s popularity and hot sales record, GIGABYTE continues its triumphant run, launching two other 4K gaming monitors with the HDMI 2.1 support as well. The 32-inch AORUS FI32U and the 48-inch AORUS FO48U are arriving shortly. In addition to the advanced hardware specs, these two 4K displays offer the perfect mix of resolution and size that PC and new-gen console gamers have long been waiting for when seeking a 4K gaming monitor.

Being one of the fastest, most responsive 4K gaming monitors, the FI32U focuses on PC gamers who are rocking top-shelf graphics cards, like an RTX 3080 to make smooth 4K gaming a reality. This 32-inch monitor is currently the only 4K gaming monitor hitting the market now that packs in HDMI 2.1 and SuperSpeed IPS up to 144Hz/1ms GTG, guaranteeing buttery smooth 4K gaming in beautiful colors and contrast at the same time.

Targeting the new-gen console players, the big-sized FO48U is the world’s first 48-inch gaming monitor featuring a premium OLED panel. Devices like PlayStation 5 and Xbox Series X can take full advantage of its HDMI 2.1 bandwidth to unleash the latest 4K/120Hz gaming performance. The FO48U is also equipped with the soundbar-caliber Space Audio to further immerse gamers in their favorite gaming worlds.