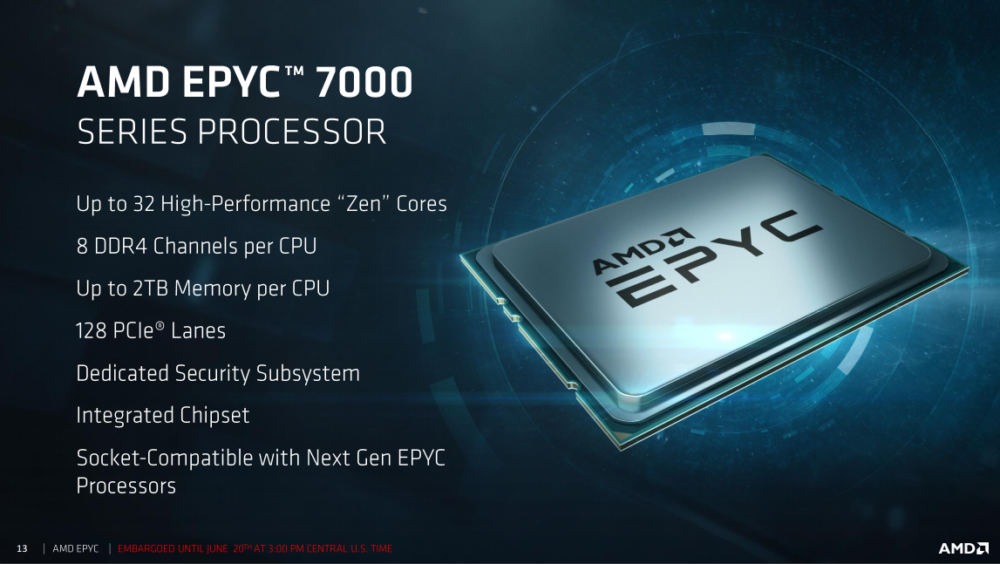 AUSTIN, Texas, June 20, 2017 (GLOBE NEWSWIRE) — AMD (NASDAQ:AMD), and a global ecosystem of server partners, today marked a new era in the datacenter with the launch of AMD EPYC™ 7000 series high-performance datacenter processors. AMD was joined by multiple customers and partners at the global launch event in presenting a wide array of systems, performance demonstrations, and customer testimonials. The innovative, record-setting AMD EPYC design, with up to 32 high-performance “Zen” cores and an unparalleled feature set, delivers greater performance than the competition across a full range of integer, floating point, memory bandwidth, and I/O benchmarks and workloads.

“With our EPYC family of processors, AMD is delivering industry-leading performance on critical enterprise, cloud, and machine intelligence workloads,” said Lisa Su, president and CEO, AMD. “EPYC processors offer uncompromising performance for single-socket systems while scaling dual-socket server performance to new heights, outperforming the competition at every price point. We are proud to bring choice and innovation back to the datacenter with the strong support of our global ecosystem partners.”

“The EPYC processor represents a paradigm shift in computing and will usher in a new era for the IT ecosystem,” said Antonio Neri, EVP and general manager Enterprise Group, HPE. “Starting with the Cloudline CL3150 and expanding into other product lines later this year, the arrival of EPYC in HPE systems will be welcomed by customers who are eager to deploy the performance and innovation EPYC delivers.”

“As an industry leader, we are committed to driving IT transformation for our customers,” said Ashley Gorakhpurwalla, president, server solutions division at Dell EMC, “Our next generation of PowerEdge servers are the bedrock of the modern data center that are designed to maximize business scalability and intelligent automation with integrated security. The combination of PowerEdge and the AMD EPYC performance and security capabilities will create unique compute solutions for our customers to accelerate workloads and protect their business.” 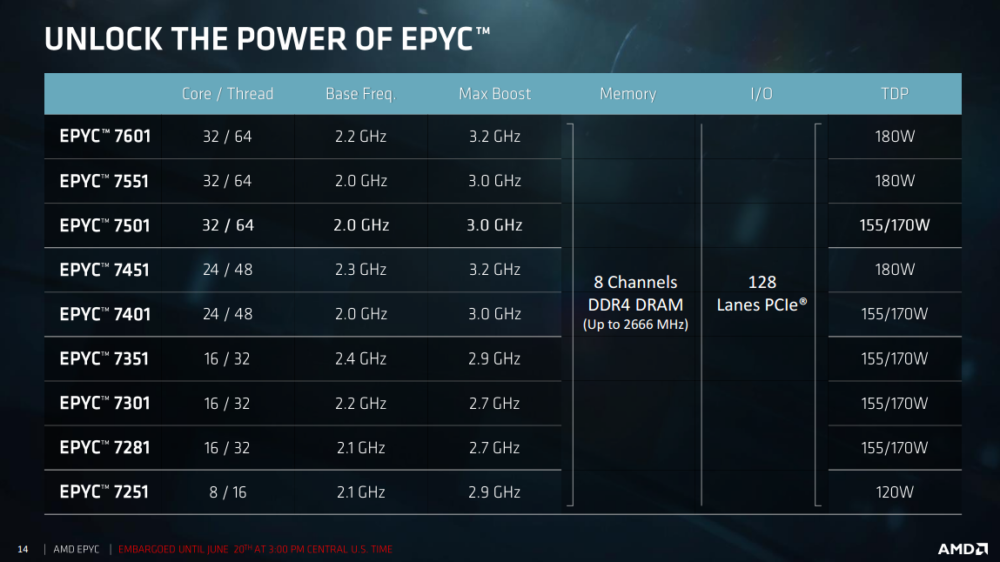 Datacenter and cloud service providers also welcomed EPYC to the market today. Members of the “Super 7” datacenter services providers, including Baidu and Microsoft Azure, as well as 1&1, Bloomberg, Dropbox and LexisNexis, all voiced their support at launch.

“As the world’s largest Chinese language search engine and leading AI-Tech company, Baidu prides itself on simplifying a complex world through technology,” said By Dr. Zhang Ya Qin, president of Baidu. “The AMD EPYC processor powered one-socket server can significantly increase our datacenter computing efficiency, reduce TCO and lower energy consumption. We will start deploying with the launch of AMD EPYC and I look forward to our cooperation leading to scaled EPYC adoption this year, and ongoing innovations.”

“We’ve worked to make Microsoft Azure a powerful enterprise grade cloud platform, that helps guide the success of our customers, no matter their size or geography,” said Girish Bablani, corporate vice president, Azure Compute, Microsoft Corp. “To power Azure, we require the most cutting-edge infrastructure and the latest advances in silicon which is why we intend to be the first global cloud provider to deliver AMD EPYC, and its combination of high performance and value, to customers.

The excitement around EPYC is driven by multiple record-setting server benchmarks achieved by EPYC-powered one-socket and two-socket systems.

All EPYC processors combine innovative security features, enterprise class reliability, and support a full feature-set. An AMD EPYC™ 7601 CPU-based one-socket system shifts expectations for single socket server performance, helping lower total-cost-of-ownership (TCO), providing up to 20% CapEx savings compared to the Intel Xeon E5-2660 v4-based two-socket system4. At every targeted price point for two-socket processors, EPYC outperforms the competition, with up to 70% more performance in the eight hundred dollar price band and up to 47% more performance at the high-end of the market of four thousand dollars or more5. 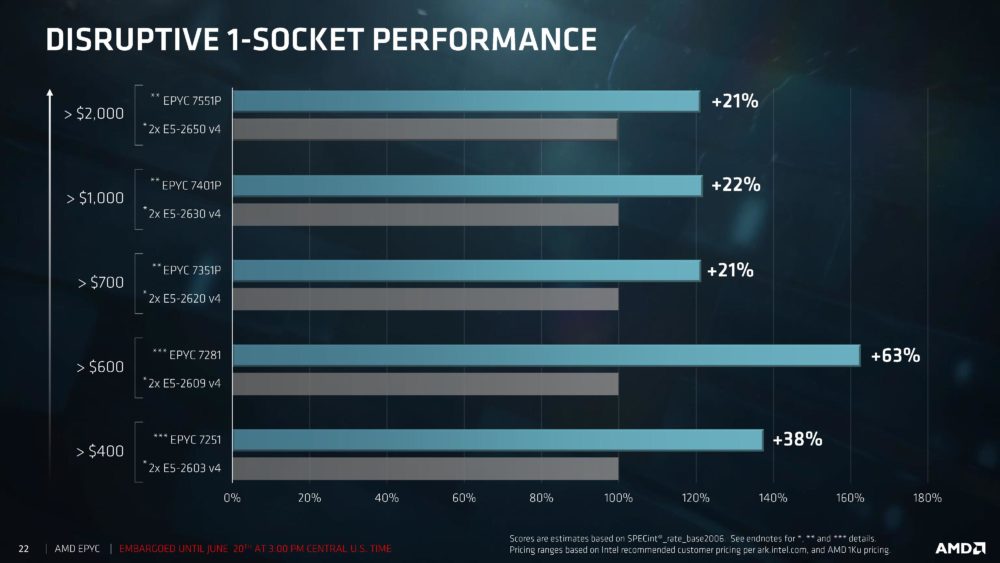 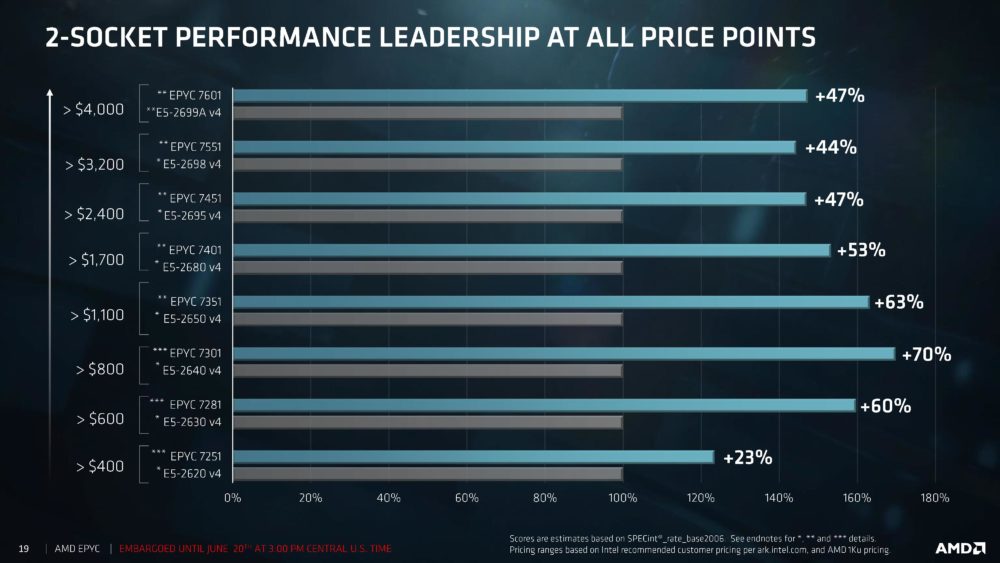 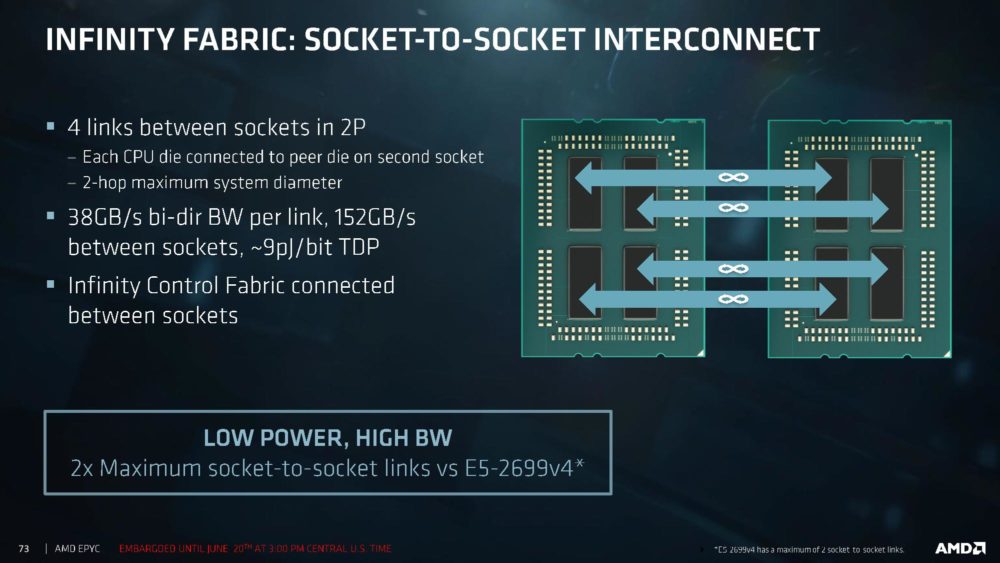 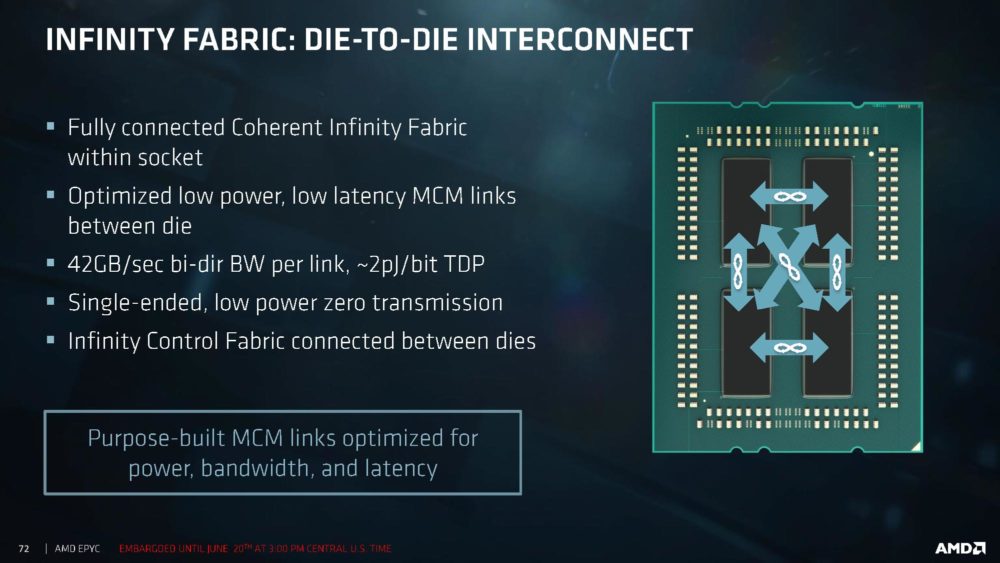 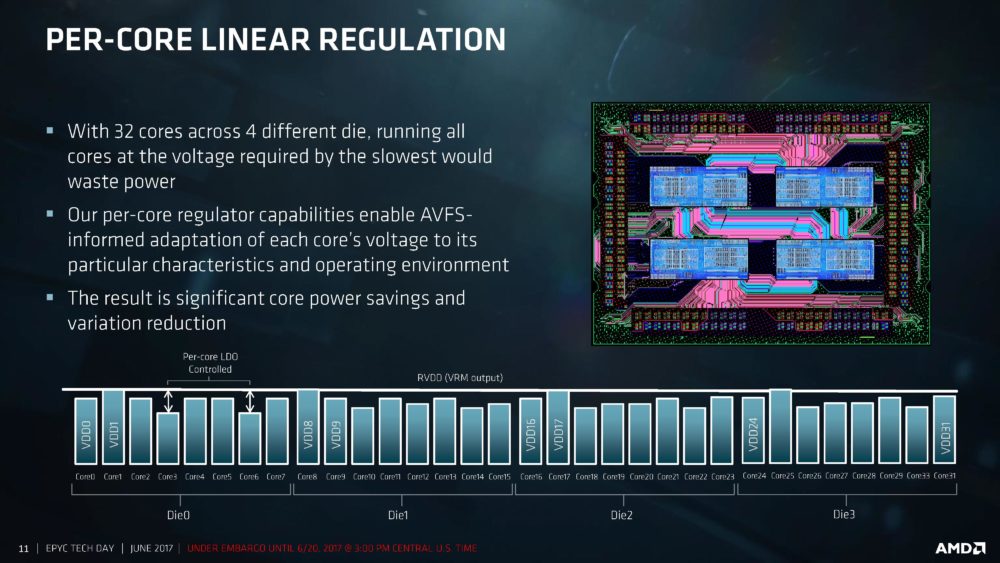