The company has just confirmed it will launch a new AMD-powered gaming laptop in the third quarter this year, most likely in August. The initial information on NEO 15 and NEO 17 laptops is already available, but the official press release will be released in about two weeks, the company representative claims.

Same as the Alder Lake-based E22 chassis, these laptop series will also be compatible with the OASIS liquid-cooled system. This means that the series will also feature Cherry MAX Ultra Low Profile active mechanical keyboards. What’s new compared to Intel based systems though, NEO 15/17 with AMD CPU will support Virtual Reality headsets.

THE ALL NEW XMG NEO 17 COMING IN AUGUST

The completely newly developed XMG NEO 17 (M22) is the most powerful XMG laptop ever! Fully exploiting the maximum power limits of its high-end hardware, a first-class cooling system, a 240 Hz fast, high-resolution display (2,560 x 1,600 pixels) in 16:10 format and a 99 Wh battery result in a high-performance package that has been implemented to perfection – expandable with the innovative XMG OASIS liquid cooling system.

The updated XMG roadmap shows XMG NEO and XMG CORE laptops launching in the third quarter. Laptop manufacturer is also listing Intel Arc based laptops somewhere between Q3 and Q4, but no details are available at this moment. 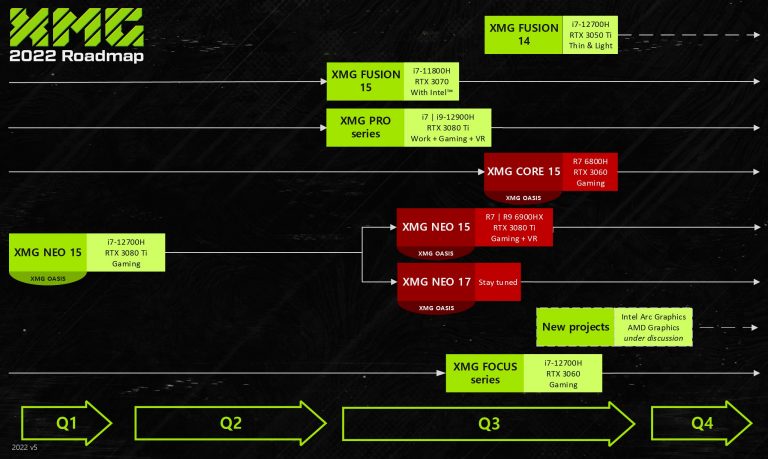