We may finally have a possible launch date for Tiger Lake H(45).

In a lengthy post on Reddit, an XMG representative provided an update on the current stock situation of NVIDIA GeForce RTX 30 GPUs and AMD Ryzen 5000 CPUs codenamed Cezanne. The company can obviously only speak for itself, so the situation may not necessarily be the same for other brands.

Intel has only just released its Tiger Lake-H35 processors at CES 2021. The H35 is 4-core CPU series for ultra-thin and portable gaming designs. However, the company already showcased its 8-core CPUs during the same event but provided no date on when to expect these chips.

According to the message posted by XMG, the Tiger Lake-H series is now scheduled to launch at the end of Q2, which implies May or June. While it is unclear how the global situation around the pandemic will pan out, it is possible that Intel might want their partners to show next-gen laptops at Computex, which starts in early June.

The currently known XMG laptops (except CORE 14) will only be available with Tiger Lake once there is Tiger Lake H45 with 6 to 8 cores. The launch of H45 is currently not announced but rumored to be at the end of Q2 this year. We have plans to transition various XMG product families from Comet Lake to TGL H45 when the time comes. On some families, AMD Cezanne and Intel Tiger Lake might be offered in parallel. But the exact plan (which SKU gets what and when) is not set in stone yet and currently too early to discuss.

An earlier report from AnandTech does appear to confirm that the Q2 market launch is indeed a possibility:

Intel says that these processors will start production and ship in Q1, which likely means that the actual products will come to market in Q2.
— Dr. Ian Cutress, AnandTech

Intel already confirmed that the Tiger Lake-H series will boost up to 5.0 GHz on multiple cores. This likely means that the flagship SKU with TDP adjustable beyond 45W (possibly Intel Core i9-11980HK) will be able to boost to 5.0 GHz on at least 2 cores.

The series will also offer up to 20 PCI Gen 4.0 lanes directly attached to the CPU. This means that it will now be possible to take the full benefit of the PCIe Gen 4.0 x16 GPU interface as well as NVMe PCIe Gen 4.0 x4 at the same time. 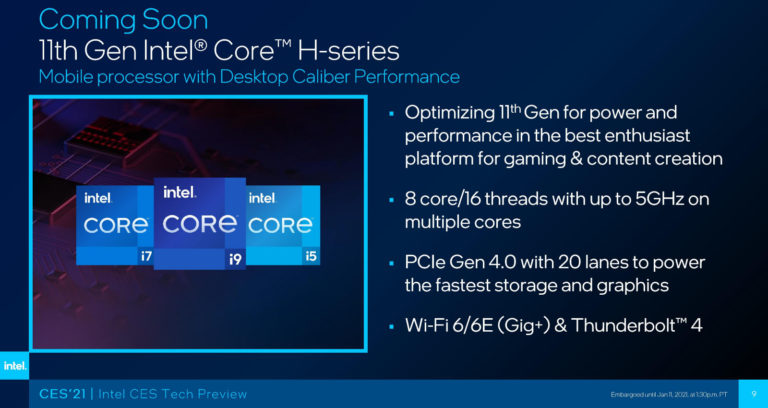 Below you will find a list of released Tiger Lake-H35 SKUs and rumored specs of the Tiger Lake-H chips. The list is likely missing some 6-core CPUs, but it is too early to confirm.