According to the official roadmap, the company is set to launch its 12th Gen-based XMG Fusion laptops starting this quarter. Initially, those laptops are to be outfitted with NVIDIA RTX GPUs, however, there are plans for an ‘unspecified’ Intel ARC-based model (XMG Fusion) around late Q2/beginning of Q3 2022.

It is no secret that XMG follows the launch schedule of its OEM supplier, such as TongFang. Laptops carrying identical designs are available under different names, such as Eluctronics, MechoRevo, and others. This means that all these brands might also consider Arc laptops, should they find the OEM design suitable.

At the same time, XMG will be launching its Ryzen 6000 based designs, which are clearly delayed compared to Intel Alder Lake designs. XMG does not specify the discrete GPUs those laptops will be using, but one would guess that those should still be GeForce RTX 30 based, instead of the recently announced Radeon 6X50XT/6000S series.

Update: XMG released a new roadmap that no longer mentions Intel ARC GPU. The company requested the following short statement to be published:

We will have some opportunities to feature Intel Arc Graphics in some future models, but those are still in the planning stage and cannot be confirmed at this time. The previous version of the roadmap was misleading and for that we apologize. 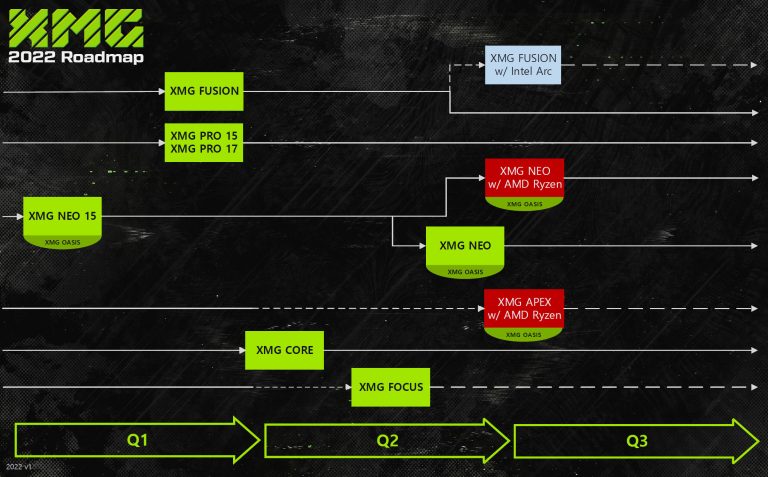 In contrast to the XMG NEO which is designed for maximum mobile performance, the update of the XMG PRO model series offers a somewhat more balanced concept. The laptops will feature a fundamentally redesigned chassis, which is slightly thicker compared to the very slim predecessor, in return for more performance. The top model will feature an RTX 3080 Ti operating at a TGP of 155 watts (2021 model: max. 105 watts). Compared to the NEO, the new PRO offers a slightly more versatile connectivity, including a dedicated Mini DisplayPort directly connected to the dGPU. Due to the expected shortage of DDR5 RAM, XMG is planning the PRO with DDR4 despite the update to 12th gen Intel Core. The laptops are expected from the end of the first quarter.

Another highlight is coming with the follow-up to the long-running XMG FUSION 15 from 2019: The upcoming XMG FUSION 16 is even more trimmed for thinness and lightness and will feature a 16:10 display, among other things.

In the upper performance mid-range, represented by the XMG CORE with RTX 3060, XMG wants to stick to the dualism of an Intel- and AMD-based model, just like with the NEO, but further details on this plan are not expected until the second quarter. The series could also be upgraded with a new magnesium casing to reduce weight.

An update of the APEX model series with Ryzen 6000 CPUs is scheduled for the end of the second and beginning of the third quarter at the earliest. Alongside the NEO, the APEX is planned as the second laptop series with compatibility for the OASIS liquid cooling system. In addition, an as yet unspecified XMG FUSION with Intel’s dedicated Arc graphics unit is also casting its shadow.