Xbox Series to get a refresh

According to the video, Microsoft is to refresh both of its consoles starting late next year. The first console to see a refresh is Xbox Series S, which would receive a higher spec AMD Zen APU based on 6nm process technology. The transition to TSMC 6N, which is a refined 7nm process would result in higher manufacturing yields, and as a result, Microsoft could be enabling full 24 Compute Units from its Xbox Series S APU.

The current version of the XSS console features 20 Compute Units, but as many as 4 are disabled to preserve good yields and a continuous supply of the console. With more Compute Units and possibly higher clock speeds, the console could even be 50% faster, the YouTuber claims.

A higher performance console would supposedly cost more. A refined XSS console would cost close to 350 USD, a 50 USD premium over the current model, but at the same time, Microsoft would be introducing a price cut on the 2020 model by lowering the price to 189-249 USD, the rumor alleges. This means that Microsoft would be selling both models simultaneously.

It is not mentioned if the console would still use Zen2 or rather a Zen3 architecture. Next year AMD will be releasing its Rembrandt APU with RDNA2 and Zen3 microarchitecture, a second-generation Zen3 mobile product. Based on the changes in Cezanne (Zen3) silicon, an architectural swap might still be on a table.

Furthermore, MLID also claims that there is a refresh of the Series X console coming in 2023 or later, however, no details on this console have been shared. 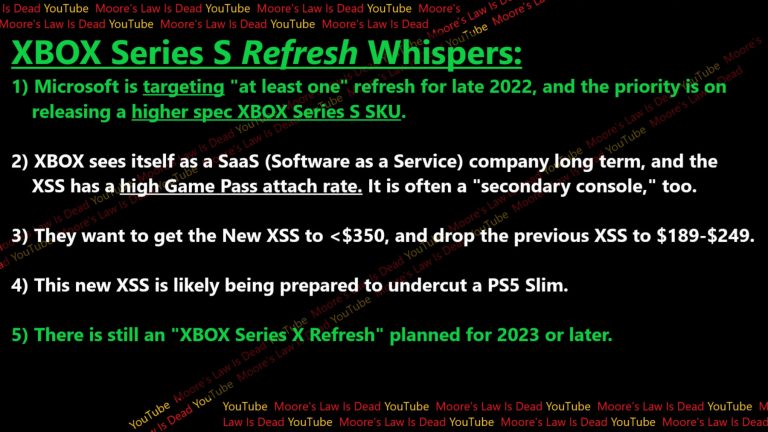