An interesting scoop from Moore’s Law is Dead on AMD next-gen motherboard series.

According to the YouTuber, the chipset cost alone will not be the biggest factor for final motherboard pricing. Although the new flagship X670(E) series featuring AMD AM5 socket will feature not one but two chipsets, their total cost will still be lower than a single X570 chipset, MLID claims.

This means that the B650 series which are basically using a single X670 chipset might easily cost less than the current-gen B550 motherboard. And that’s despite being ready for DDR5 memory and PCIe Gen5 storage.

PSA: I can now confirm two Prom21 chipsets cost less than one X570 chipset. AM5 platforms were designed to be cost-effective.

The same leaker previously reported expected retail prices from AMD 600-series motherboards. The pricing of next-gen AMD series will heavily depend on whether the motherboard supports PCIe Express 5.0 interface on graphics and storage simultaneously. The Extreme motherboards (X670E and rumored X650E) might easily 500 and 350 USD pricing respectively, which is an expected price for the most high-end variants. 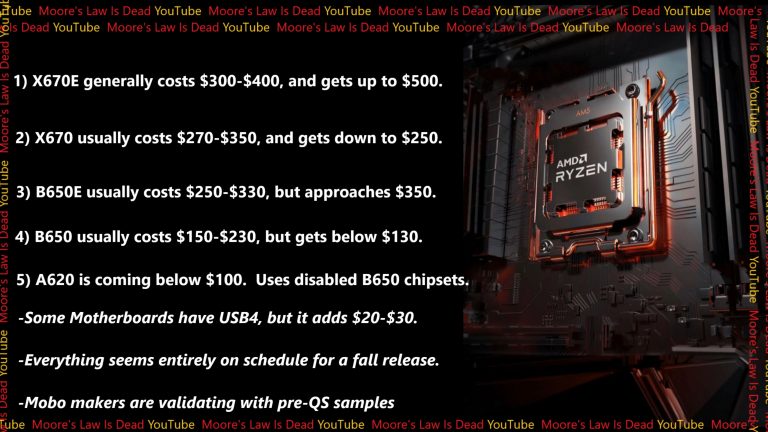 The AM5 platform will support up to 24 PCIe Gen5 lanes (plus additional 4 as a bridge between chipsets and CPU). AMD promises native support for HDMI 2.1 and DisplayPort 2.0 standards as well as USB 4, the latter also being an important cost factor for new motherboard series.

AMD Ryzen 7000 desktop series based on Zen4 architecture are now officially expected to launch in fall this year. The AMD 600-series motherboards should launch around the same time if not sooner.