The world record and new clock milestone have been broken.

The TecLab team: Ronaldo “rbuass” and Jacson Schenckel broke a new record in the highest GPU frequency ever to be achieved on RTX 2080 Ti graphics card. This milestone took days to achieve.

The graphics card used by Ronaldo and Jackson is a GALAX GeForce RTX 2080 Ti HOF OCLab Edition. This NVIDIA SKU’s reference clock speed is 1350 MHz (base) and 1680 MHz (boost) but thanks to some liquid nitrogen, the custom card was overclocked to 2243 MHz and 2573 MHz respectively (+893 MHz). The graphics memory on this sample was actually downclocked to 1653 MHz (-100MHz).

The system features a Core i9-10900K processor clocked at 5.3 GHz, Samsung B-Die DDR4 4.2 GHz memory and ASUS ROG Apex XII motherboard. Only some lapping (sanding) was applied to the GPU core, no further tweaks were necessary (bar the cherry-picking the GPU and a lot of experience).

The achieved GPUPI score is not the highest, in fact, it was even worse than with a lower clock speed (2.646s vs new 2.647s). At some frequency and thermal point, the GPU does not provide the efficiency linear to the clock increase. 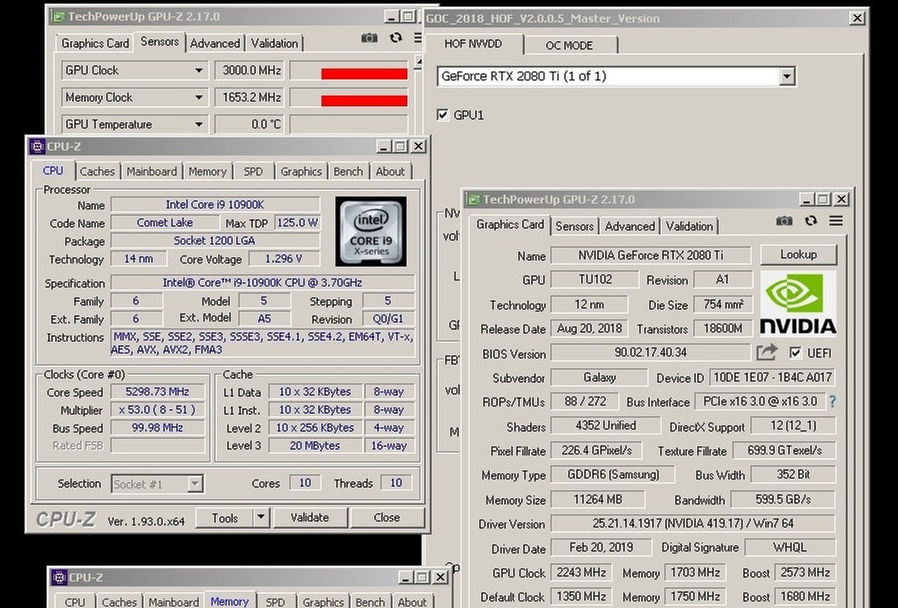 This is not the first time we are seeing a 3 GHz clock speed on a graphics card though. Four years ago at the GALAX GOC event, a sample of GTX 1060 has achieved a clock speed of 3012 MHz (story at Wccftech). The main difference here is the size of the GPU, which obviously took much more effort to cool down and overclock to such a frequency.