Expreview gathered all the available details and rumors on the upcoming AMD Ryzen APUs.

The future of AMD Ryzen APUs

The details shared by Expreview are mostly based on Komachi’s latest roadmap. However their article covering the roadmap has many more details. The original roadmap covers AMD CPU and APU codenames that were leaked through various sources such as AGESA updates, all meticulously gathered by Komachi.

Ever since Gigabyte’s leak happened, AMD Matisse Refresh has all the attention. This is the update to the Ryzen 3000 series which is expected to be the focus for AMD in the coming quarter. So right before AMD unveils Vermeer CPUs. The Matisse Refresh CPUs will be named Ryzen 3000 XT (9 3900XT, 7 3800XT and 5 3600XT).

AMD Vermeer will be offered alongside Renoir APUs (Ryzen 4000G series). The APUs and CPUs in the same series will not share the same core design. Expreview’s roadmap is not showing full picture, but the general idea is that AMD APUs are lagging behind the Ryzen CPU series.

There are other codenames that are floating around the web but have not been directly connected to any Ryzen series. It is now rumored that Cezanne APUs will be a successor to Renoir. This is for both high-end notebook series (FP6) and mid-range desktop APUs (AM4 socket). The CPU core would feature Zen3 architecture, but the graphics would still rely on Vega architecture.

A much bigger update is expected with Rembrandt. This design will not only feature Zen3+ design but also RDNA graphics. Furthermore, Rembrandt is also expected to support DDR5 and LPDDR5 memory. Expreview data even mentions that the APU will support USB4 and (if translations are correct) two PCIe 4.0 devices at the same time.

It is very likely that Rembrandt will be the first APU for the next-generation socket (rumored to be AM5). So the changes in memory support are not really that surprising. 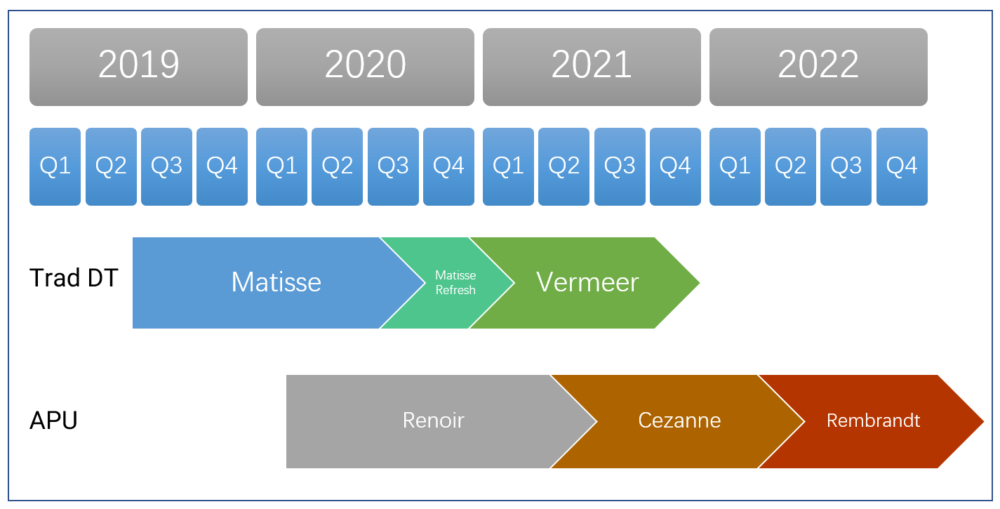 The chart posted by Komachi has missing spots for the Vermeer successor. Currently it is rumored that the first AM5 design will be Raphael. One would speculate that since we are getting Matisse Refresh, there is a good reason to expect Vermeer Refresh as well.