According to a post by 我用第三人称 on Zhihu forums, the specifications of three K-series processors from the upcoming Inte Alder Lake-S series have been leaked.

The specifications are supposedly based on qualifications samples, which from what we have learned had been distributed to Intel partners in the past few weeks. Those specs are expected to be final, as Intel does not tend to change QS specs before they go into mass production as retail units.

The post reveals the specs of three processors: Core i9-12900K, Core i7-12700K, and Core i5-12600K. The specs are divided into P-Core and E-Core. This is because Intel Alder Lake CPUs feature Intel Hybrid Technology, which is a marketing term for heterogeneous architecture that will be used by the 12th Gen Core series. The P-Core stands for high-performance core (or in short big core) while E-Core means high-efficiency core (small core). From other leaks, we have already learned that Big Core is based on Golden Cove microarchitecture while Small Core is supposedly using Gracemont.

The i7-12700K is to offer 8 big cores and 4 small cores, which will see 100 MHz lower frequencies, while big cores will see a 300 MHz decrease in comparison to the flagship SKU. A 25MB L3 Cache is to be used by this processor. The only Core i5 part revealed in this leak is the i5-12600K supposedly featuring a 6C+4c configuration with a small-core boost up to 3.6 GHz and a big core boost up to 4.9 GHz. 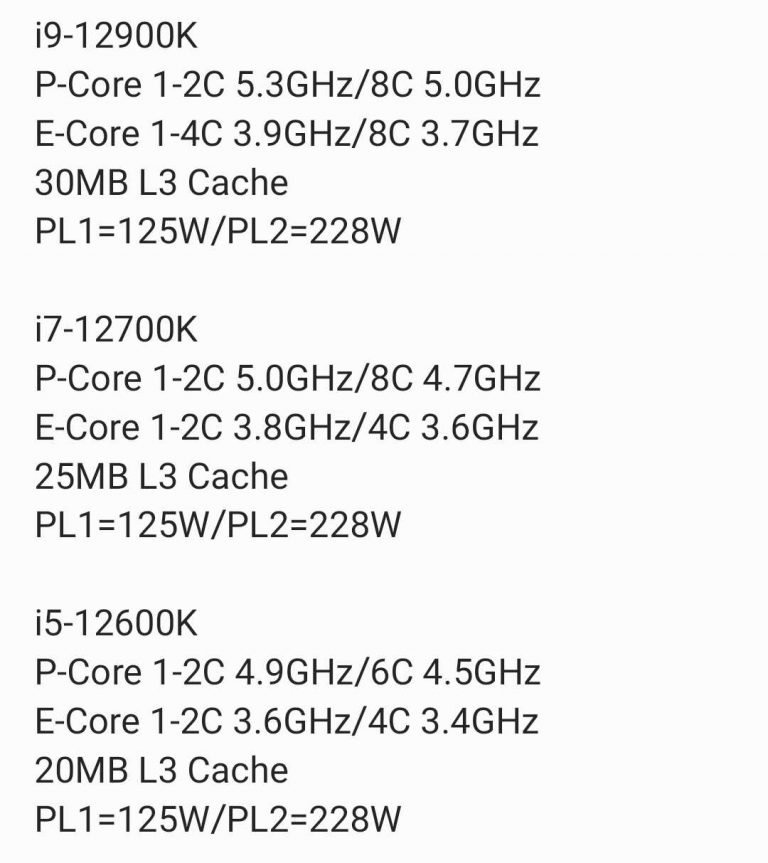 Intel Alder Lake-S series is to be based on a 10nm Enhanced SuperFin node. The series features up to 16 cores, doubling the core count in comparison to the Rocket Lake-S series. The 12th Gen Core will also be the first to support DDR5 memory as well as PCIe Gen5 standards. The series is to debut by the end of this year, but no firm date has yet been shared by Intel.