Specifications of AMD Ryzen PRO 5000G series have been leaked

This should not be a surprise to anyone, but the upcoming Cezanne AM4 CPUs from Ryzen PRO 5000G and Ryzen 5000G series will have identical clock speeds. Leaker @momomo_us has posted a screenshot with Ryzen PRO 5000G specifications, which reveals base clocks as well as core configurations and TDP of the new SKUs. It would appear that the PRO moniker and the technology behind it, is the only thing that distinguishes both series. 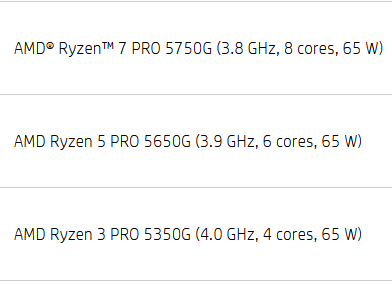 It is worth noting that Momomo was also the first to leak non-PRO series specifications. That leak was a bit more detailed when it comes to turbo clocks. Both series are expected to feature exact same frequencies.

The differences between Ryzen PRO and the non-PRO series are not significant. The PRO series is meant for businesses that require more security, manageability, and longer support. The Ryzen PRO, which was first released back in 2017 as a competition to the Intel vPro series, offers just that.