Multiple users report that their A770 LE GPUs are not showing up with advertised 17.5 Gbps.

Intel announced two Arc A770 models featuring either 16GB or 8GB memory. What is important to note is that the Limited Edition from Intel only comes with 16GB memory. The company decided that all A770 cards with 16GB should have a higher memory clock speed than 8GB models, which in this case means 17.5 Gbps instead of 16 Gbps.

As it turns out, multiple users now report that their 16GB Limited Edition cards are actually running at 16 Gbps memory. What this means is that instead of 560 GB/s bandwidth, their cards are ‘limited’ to 512 GB/s, which the same speed as A770 8GB or A750 SKUs.

Those users have now reported this issue to Intel via Github, where at least a few instances were already posted. We can clearly see that the memory speed is 2000 MHz instead of 2187 MHz: 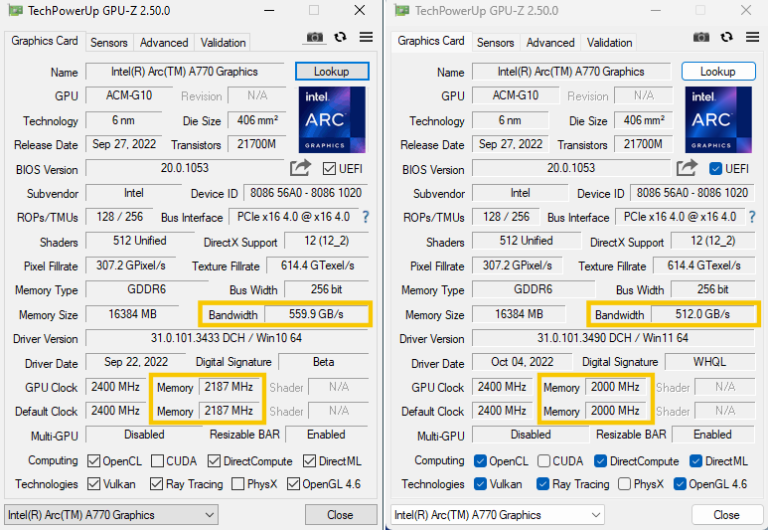 The memory speed and bandwidth are higher. This problem is reportedly not limited to GPU-Z but other software as well. Furthermore, both cards are using the same BIOS.  We have reported this issue to GPU-Z developer, who is now looking into this issue as we speak.

In any case, this issue has not been well documented yet, so if you are facing similar issues with this model specifically, we encourage you to check the clock speed in multiple apps. It also won’t hurt to report this issue through the Github as well.

Just be aware that this could be as simple bug in Intel API/drivers reporting wrong clocks. We will update this post should a solution be found quickly.