The next-gen flagship processor for Samsung Galaxy devices has been discovered in the Geekbench benchmark database.

Alleged Samsung SM-S906B SoC has been spotted on Geekbench where the processor has been attached to AMD GPU driver. This suggests were are looking at Exynos 2200 SoC or its derivative featuring AMD RDNA2 GPU on board. The Geekbench data actually appears to confirm this by listing Samsung Voyager EVTA1 in the driver section. This codename has already been used to describe this upcoming product.

Samsung Exynos 2200 would feature 8 cores with four cores clocked up to 1.73 GHz, 3 cores up to 2.5 GHz, and 1 core up to 2.59 GHz, the Geekbench specifications appear to confirm. Those are of course lower frequencies than Exynos 2100, which suggests we are looking at an engineering sample, not a final product or specifications. Unforuntlatey though, the data does not include AMD GPU confirmation as the primary Geekbench test is for the CPU compute power only. According to rumored specs, the Exynos 2200 would feature 384 Stream Processors, combined in 6 Compute Units. 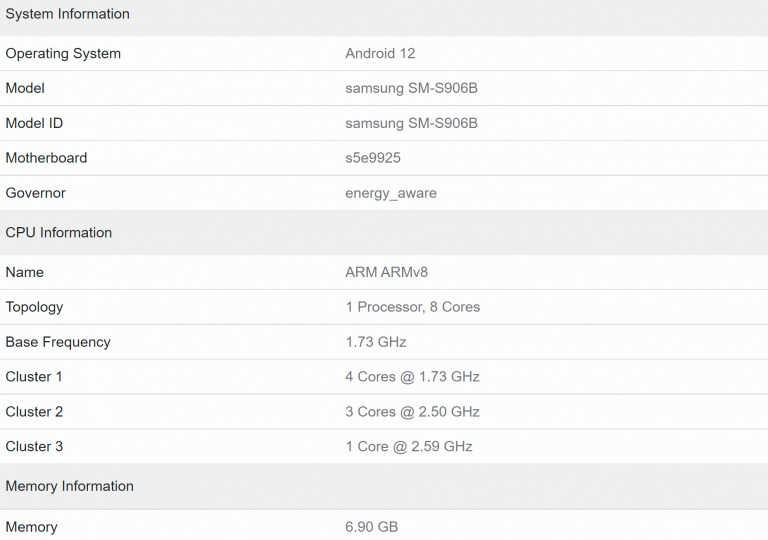 The processor scored 1072 points in the SIngle-core test and 3389 points in the multi-core workload. This is lower than Exynos 2100, which can score 1112 and 4073 points respectively.

Samsung Exynos 2200 SoC is now expected to debut with Galaxy phones in early 2022.