Samsung GDDR6 K4ZAF325BM-HC14 is 16 Gb module operating at 1.35V. This is Samsung’s first GDDR6 module. The chip pictured below is an engineering sample provided for the sole purpose of this award. Officially this module is still ‘under development’, but that didn’t stop CES board from giving it an award.

The CES takes place next year in January. NVIDIA already announced a keynote for January 7th. It is either there or in March (GPU Technology Conference) where Jensen will unveil Volta-based GeForce models. The GDDR6 is likely to make an appearance with GeForce 2000 series. 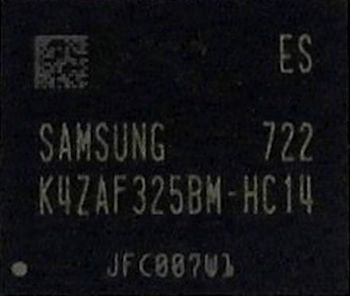 Samsung 16Gb GDDR6 Memory – The fastest and lowest-power DRAM for next generation, graphics-intensive applications. It processes images and video at 16Gbps with 64GB/s data I/O bandwidth, which is equivalent to transferring approximately 12 full-HD DVDs (5GB equivalent) per second. The new DRAM can operate at 1.35 volts, offering further advantages over today’s graphics memory that uses 1.5V at only 8Gbps.