The PC port of the Resident Evil Village has been observed to suffer from severe stuttering issues. With the framerate capped the issues were visibly less noticeable, but once the limit was removed, frame freezing up to 130ms could be observed. Such issues were not be seen on a console version of the game, which raised concern that the culprit behind those issues could once again be the anti-tamper DRM tool called Denuvo. 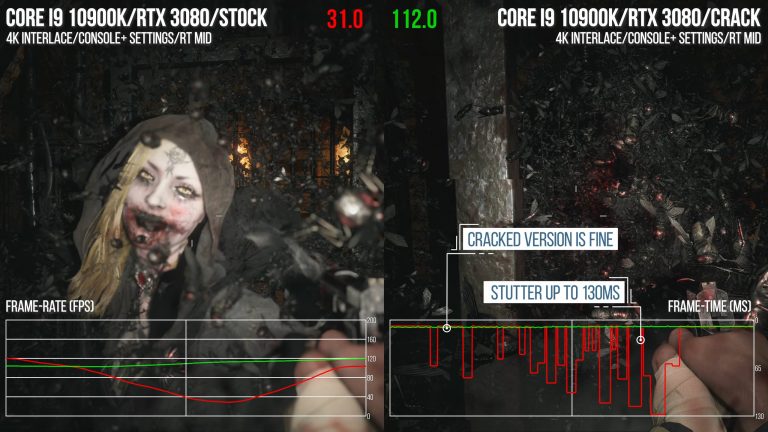 Resident Evil Village comes with Denuvo but also features developers’ own anti-piracy tools. Once these anti-temper countermeasures kick in, the game freezes, even during key animations, even fighting. This severely affects the smoothness of the gameplay and overall experience. Interestingly though, Capcom who developed the game have not acknowledged the issue nor provided a fix for nearly 3 months since the game was released on PC.

Earlier this week a crack was released for this game, which surprisingly removed all those issues, Eurogamer has confirmed this after their own analysis. Thanks to this crack, the game is now playable without any stutter even up to 160 FPS on GeForce RTX 3080 with ray tracing enabled.

At this point, Capcom should release a patch that either solves those underlying issues or removes Denuvo completely, which happens to be a common theme among games ‘affected’ by this software.

Update: Speaking of a patch, Capcom has just confirmed to Eurogamer they are working on a patch that solves the issues:

The team are working on a patch to address PC performance issues, it should be available soon – we’ll have more details shortly.