According to a new leak from Geekbench, Razer is now testing an 18-inch laptop equipped with Raptor Lake-HX CPU.

A product labeled as Razer Blade 18 (RZ09-0484) is an upcoming gaming laptop featuring unreleased 13th Gen Intel Core processor. The name suggests that this laptop will be an 18-inch successor to the Razer Blade 17, currently the most powerful laptop series the company offers.

Interestingly, the Blade 18 would be the first laptop from Razer to feature the Intel HX-series CPU, which is a desktop class processor designed for the laptop BGA package. Only the most powerful gaming laptops get these processors, which may explain why Razer opted for a bigger chassis.

According to the Geekbench data, Core i9-13900HX CPU has a 24-cores and 32-threads, so the same config as desktop Core i9-13900K. The detailed result data confirms that this Raptor Lake CPU will boost up to 5.4 GHz. 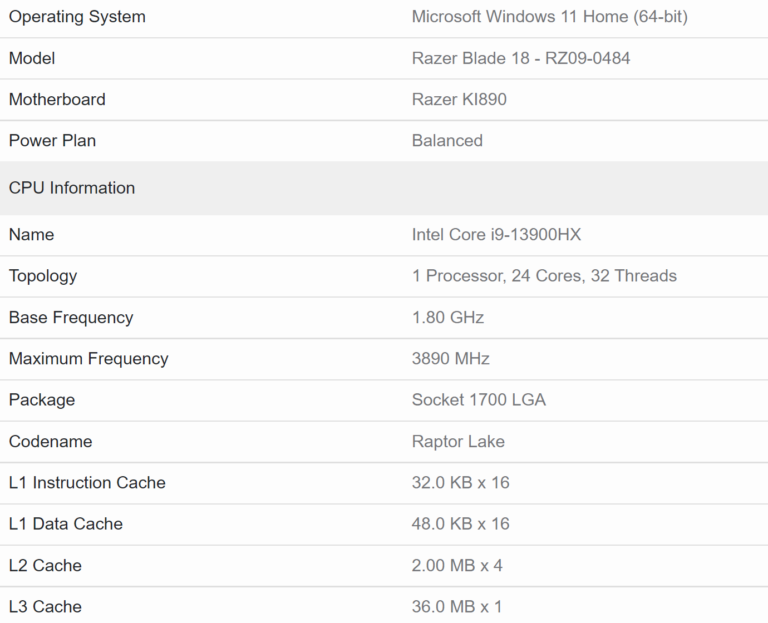 Such result puts i9-13900HX at the very top of the Intel mobile stack. The CPU would be 14% faster than Core i9-12950HX in single-core test and up to 45% faster in multi-core test. That’s a significant performance boost thanks to the additional cluster of Raptor Lake’s Efficient cores.

Intel has thus far not confirmed the release date of 13th Gen Core laptop series, especially the HX variants, which could launch after the base H-series lineup. However, Intel CEO Pat Gelsinger did mention that the company wants a new laptop CPU series to launch by the end of this year.